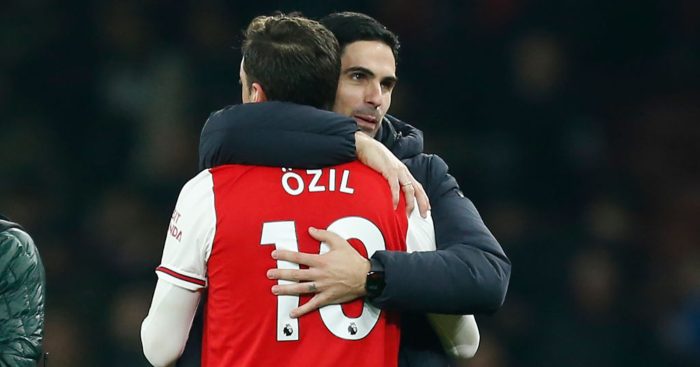 Arsenal manager Mikel Arteta has responded to the claim from Mesut Ozil that “loyalty is hard to come by nowadays”.

Ozil said that he was “deeply disappointed” with Arteta’s decision to omit him from Arsenal’s 25-man Premier League squad, having already been left out of their Europa League side.

The German suggested his “loyalty and allegiance” to Arsenal “has not been reciprocated” but Arteta insisted he had acted with the best intentions.

“My conscience is very calm because I have been very fair with him,” he said.

“I have to try and look everybody in the eye and be comfortable with it. I have this feeling with Mesut.

Arteta also denied the suggestion that Ozil’s refusal to take a pay cut along with most of the rest of the squad has played a part in his demise.

“It is nothing related to any behaviour or pay cuts. It is not true. It’s my decision,” he said.

“You remember the atmosphere around him when I joined, it was pretty difficult. I asked myself, our fans to support him and create a much better atmosphere. You remember and recall, you could see the difference at Emirates Stadium in two or three weeks and that was a way in my opinion to support that player but look for the interests for the football club as much as possible. But then I have to see daily, basically, the input, the performance and what every player brings to the team.”

Former Arsenal manager Arsene Wenger believes Arteta has phased Ozil out of the team because “the defensive side of it is not his strength” and the World Cup winner “is not very efficient”.

Per Mertesacker told the Klick and Rush podcast that getting married might have affected his “focus”. Sure.