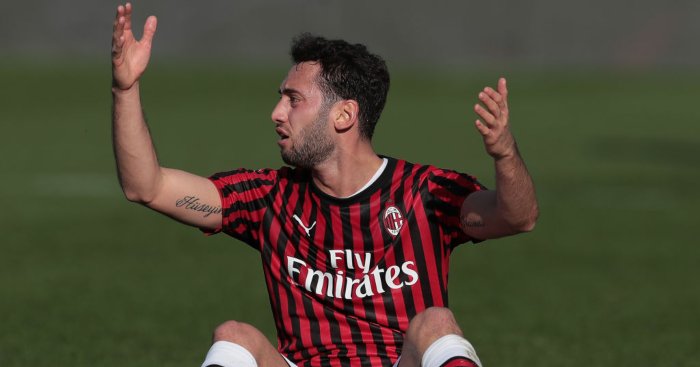 Premier League side Arsenal are eyeing a loan move for AC Milan midfielder Hakan Calhanoglu, according to reports.

Arsenal are unlikely to make any permanent signings this month after a hefty outlay in the summer.

They broke their club transfer record to recruit Nicolas Pepe as well as completing moves for David Luiz, Gabriel Martinelli, Kieran Tierney and William Saliba – with the latter then rejoining St Etienne on loan.

Those deals equated to a reported total in excess of £135million, meaning the well for January signings is all but dry.

However, there is speculation that Arsenal will release funds for Arteta to bring in players on loan.

The Gunners brought in Dani Ceballos on loan in the summer from Real Madrid and now the north London club are reportedly looking at loaning another midfielder.

The Daily Mirror claims that Arteta is ‘considering a move’ for Calhanoglu from Milan with the Serie A outfit ‘ready to offload’ their Turkish midfielder as they try to ‘remould’ their side.

Calhanoglu ‘is keen to move on’ despite featuring in all but one Serie A match for the Rossoneri this season.

The Turkey international moved to Milan in 2017 from Bayer Leverkusen for a reported fee of €20m.