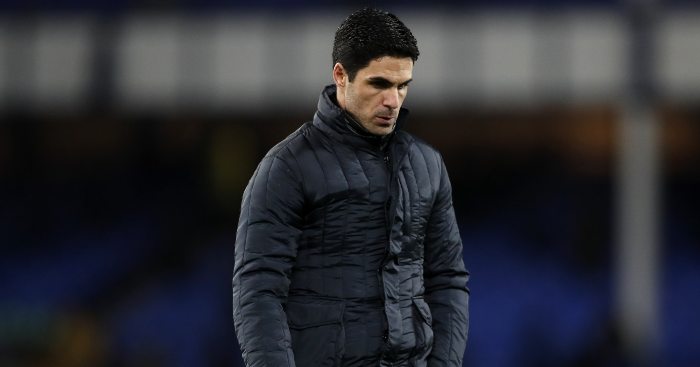 Arsenal boss Mikel Arteta had everyone perplexed as he reeled off a load of percentage statistics during his Monday press conference.

The Gunners are currently in the middle of a seven-match winless run, with their latest loss against Everton on Saturday meaning they sit in 15th position on 14 points.

Arsenal have lost eight times in total and only bottom side Sheffield United have a worse record and it has put Arteta, who marks his one-year anniversary at the club on Sunday, under pressure.

“That’s part of my job. I don’t read. If I start to read all the comments whether they are positive or negative, they would drive me mad. My suggestion to every player is exactly the same.

“All the time it happens with this social media. You cannot control who is writing, what their intentions are. It’s a very dangerous thing to do. When you talk about the dressing room the atmosphere is good as it can be when we’re all hurting because everybody is worried.

“Everybody wants more and we’re working to get much more. In the dressing room when you’re losing football matches it’s difficult because they suffer, because they care and the confidence level starts to go through.

“The unity it’s there. Is it possible in any club to have 100 per cent even if you win. When you look at the perspective how we are losing football matches and how we are where we are it’s pretty incredible.

“Last year against Everton we won the game with 25 per cent chance of winning, supported by the stats. We won 3-2.

“There is something else apart from that that has to go our way and at the moment it doesn’t. Saying that it doesn’t care because you lose and the only thing that cares and you lose the match and that’s why we’re here.”