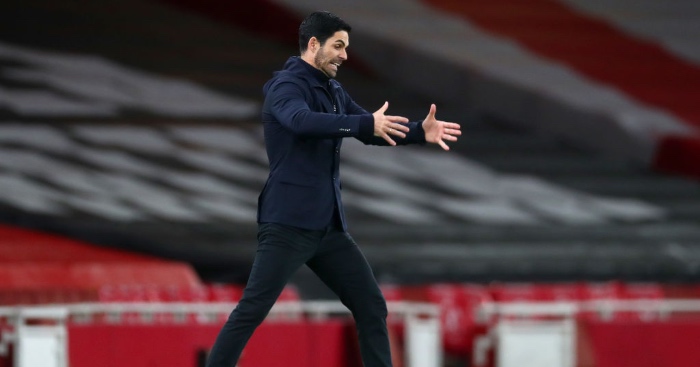 Mikel Arteta poured cold water on Theo Walcott’s suggestion that he could “feel a lot of fear” from the Arsenal players in the 1-1 draw on Wednesday.

Walcott opened the scoring for Southampton but Pierre-Emerick Aubameyang responded to net his first goal from open play since the start of the season.

But Arsenal started the game tentatively and Walcott suggested he and his Saints teammates could feel the fear.

READ MORE: One per club: Players eyeing up the January sales

The forward was seen sharing a lengthy pitch-side chat with Arteta after the game.

Asked about Walcott’s comments, Arteta responded: ‘I don’t know. I was going to say, I just spoke with him and he never mentioned that to me.

“He mentioned other things but not that. But, I don’t know… if he said that, it’s his feeling.”

Probed on how he can get Arsenal playing with confidence, Arteta continued: “Just to play with freedom and to enjoy the profession as well.

“And be accountable when you go out on the pitch, that you do your best and then there are a lot of things that we cannot control.

“And I’ll try to protect them as much as possible and give them comfort, but you saw there were four or five situations in the first half where we were around the box, inside the six-yard box to finish the action and it should be a goal, and it’s lacking.