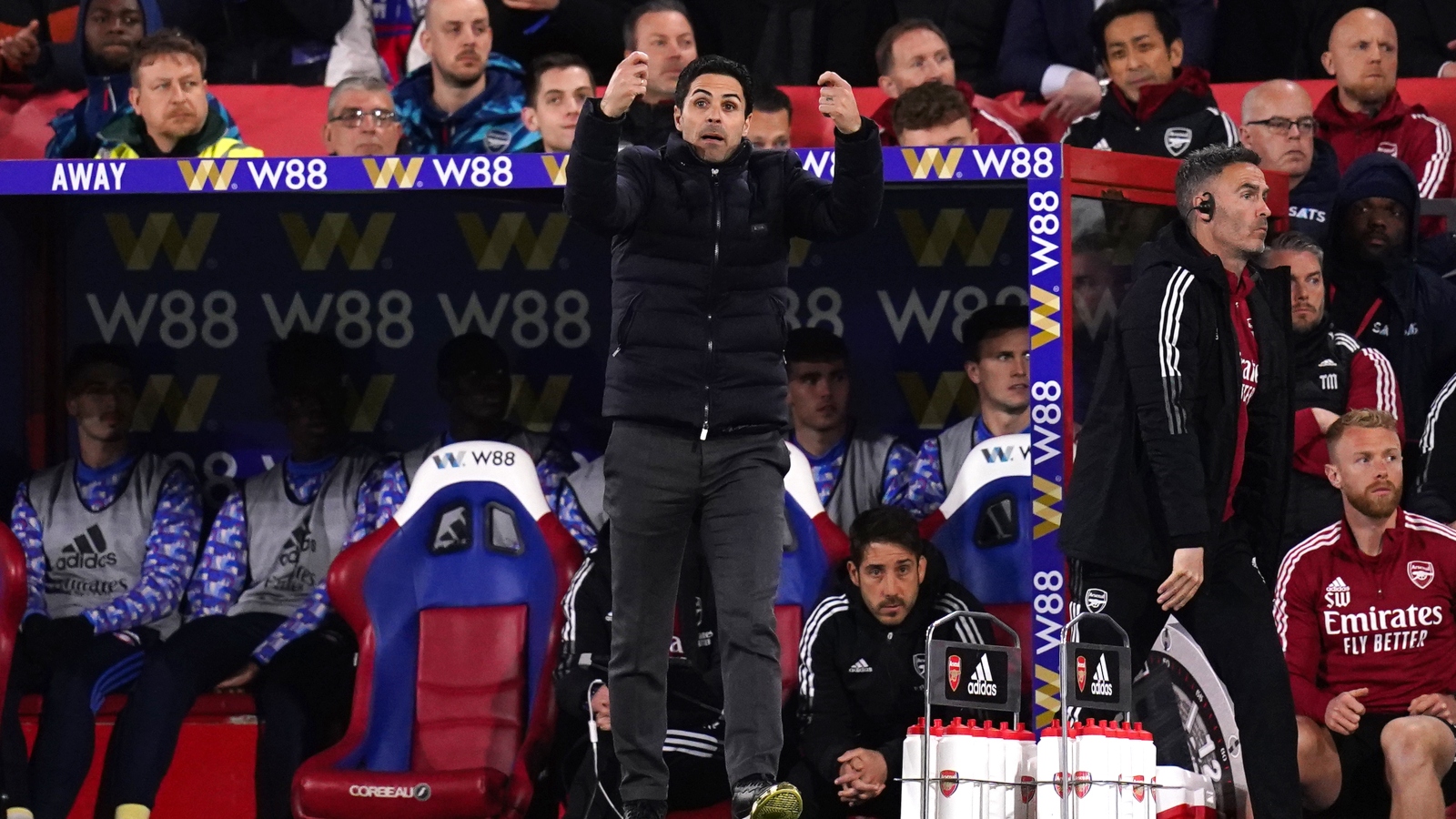 Mikel Arteta insists that his young Arsenal side are not feeling the pressure of the top-four race following Monday’s 3-0 defeat at Crystal Palace.

The Gunners were blown away by their old captain Patrick Vieira, who saw his side go two up inside 24 minutes through Jean-Philippe Mateta and Jordan Ayew before Wilfried Zaha’s late penalty added some deserved gloss.

F365 says: Arsenal sleep through the din at Palace

A 5-1 win for Tottenham over Newcastle on Sunday saw them leapfrog rivals Arsenal in the race for Champions League qualification but Arteta hit back at suggestions his young side are feeling the heat following a chastening night.

“Overall, it is unacceptable, we hold our hands up, me the first one and apologise, we regroup, tomorrow is a new day and a new opportunity to start to prepare against Brighton,” the Gunners boss said.

“No, because the pressure has been there for the last seven or eight weeks and we are talking all the time about the race and the top four and this is while they have been performing extremely well, getting results and playing well.

“Today we didn’t perform and it is as simple as that. We were second best in every department, especially in the first half.”

Arsenal had won six of their previous seven fixtures before visiting Palace, but looked unsettled from the outset and it was no surprise when Mateta nodded in a 16th-minute opener following Joachim Andersen’s header across goal.

It was 2-0 eight minutes later when Ayew collected Andersen’s pass and bent his shot around Aaron Ramsdale and into the bottom corner. Selhurst Park was rocking now but Arteta would have again been left aghast at the defending of Gabriel Magalhaes and Nuno Tavares.

The second half was better for the visitors but Emile Smith Rowe and Martin Odegaard squandered fine openings before Zaha’s excellent run won a spot-kick, which he converted to make it 3-0.

“No, we have a game in hand still,” Arteta replied when asked about whether Spurs being fourth had been a psychological blow to his team.

“We know in the nine games a lot of things are going to happen. We have to play each other, we have to play some big games coming up and we have to focus on ourselves. The problem we had today was not Spurs, it was us and what we did in the first half.”

To compound a poor night for Arsenal, Thomas Partey limped off in what Arteta described as a “big concern” while Kieran Tierney is set for a scan on Tuesday that will determine the extent of a worrying knee injury.

On Tierney, Arteta said: “He is seeing the specialist tomorrow and we will know more about the extent of the injury but the feeling that he had wasn’t really positive and what the scan showed either. We have to wait and see what happens.”

Victory for Palace moved them up to ninth and extended their unbeaten run to seven matches ahead of their trip to Wembley in a fortnight for an FA Cup semi-final against Chelsea.