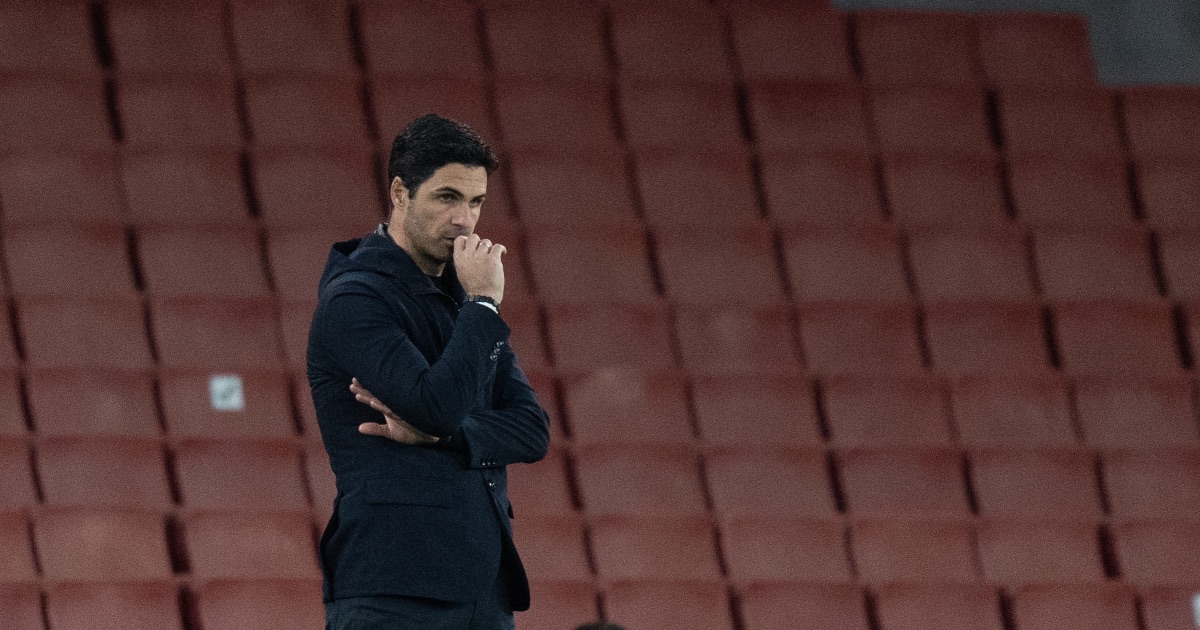 ‘Wenger-esque clown’
Just want to pay tribute to Arteta’s remarkable achievement. With just eight league matches left, Arsenal are mathematically safe on 42 points! Unreal progress from Arteta, having had a measly £100m to spend over summer; a whole pre-season to prepare and given the flux Chelski, ManYoo, Spurs and Liverpool have been through this season. Given how abysmally Liverpool have played for 3-4 months, nice touch from Arteta to donate an easy thrashing warmup game and the customary 3 points.

Quite amazing this Wengeresque clown Arteta has already lost TWELVE league games, and could still lose another 5-6! A team so bereft of attacking ideas Arsenal have a GD of just 5. Can’t attack, can’t defend. Shocking tactics, team selection and diabolical football with awful players. An arrogant manager with no pedigree, showing no inclination to change.

Yes, I coulda copy-pasted this from any Wenger season from 2006 onwards.
Stewie Griffin (midtable is the new 4th place)

‘Twas 2 bald men fighting over a comb, but that Arsenal performance was unacceptable.
Aidan, Lfc (at least try and kick a team when it’s down)

Liverpool keeping ’em honest
Props to Gareth for letting Trent have a decent rest for the first time in about three years. I’d love for him to be left at home this summer so he can be ready for next season.

The team looked solid without being threatening for the majority of the game. I don’t know if Jota made the difference or if Arsenal just got fed up of defending after 60 minutes but he looked like an inspired substitution.

Thiago should’ve done better today I think. He had very limited defensive responsibility but also barely influenced proceedings. A few times his passes broke the fluidity of our moves which was a bit frustrating. I get the feeling that Klopp was saving Jota and Gini for Real Madrid.

In the context where Leicester and Chelsea both lost this was a really good day for Liverpool. Whilst I think top four is very unlikely it’ll be good to see how those teams cope with the pressure of a top team being hot on their tails. Man Utd have also looked a little erratic in recent weeks so we can do our best to keep all of them honest as we get more and more people back from injury.
Minty, LFC

Salah a ‘diver’ but Kane ‘cute’?
Really happy with the result and performance from the lads tonight. Felt we could’ve had 4 or 5 such was our intensity and quality. With Chelsea unexpectedly losing to the Baggies this makes for a very interesting run in.

Jota is an absolute joy, particularly when Sadio is unfortunately off form (he’s still an absolute handful for the opposition).

Salah’s goal, he won the ball off Gabriel who went to ground just inside the area.

Salah stayed on his feet, as he does the majority of the time, and is derided as a diver. Kane is described as ‘cute’. Discuss.
James Outram, Wirral

Tach-tastic
I was going to write my own 16 conclusions for the match tonight, but I only have one: Alisson’s moustache is truly magnificent.
Mike, LFC, London

Werner admiration
Chelsea were in good form heading into the International Break, Thomas Tuchel won Manager of the Month and we had the early kick off against a WBA side who look set for a swift return to the Championship after one season, it almost is the perfect recipe for our own ticket to disaster and it truly was.

Jorginho arguably had one of the worst performances I have seen any player who put on our Blue jersey have, just overall horrific, F365 naturally did their Early Loser on him and have said it all about his performance, so i will move on to another few points.

Timo Werner is naturally seen as a fall guy because he cannot score, but for the fans who watch many Chelsea games you would see how he plays, whenever he does play for us he puts in a shift, of course as a forward his job is to score the goals, but just because he is not scoring those goals does not mean he is having a dreadful season or putting in consistent bad performances, Timo comes across as a top professional, a good wholesome personality and he is adding to this Chelsea side but lacking those goals, he is not shying away from his responsibilities like previous strikers we have had in recent memory, Alvaro Morata and Gonzalo Higuain are a pair that come to mind, Werner stands up, takes responsibility and for that i respect and admire him.

Christian Pulisic came off with another hamstring injury, which is now becoming a worrying trend, he is a top calibre player, so much talent at his feet but he just has no luck with his fitness, this could come across as a bit reckless to suggest but I personally now wonder if we should be looking at moving him on in the summer due to this, it is one thing having the talented player in your squad but if they are never fit to play then you have to consider the future.
Mikey, CFC

Is Allardyce the greatest English Premier League manager?
What are Mailboxers views on Sam Allardyce?

I don’t have a clue anymore! He’s been bashed a lot here on F365 (in the mailbox and F365 journos), and a lot of it was deserved. Just hearing “Allerdici” reminds me why.

But he’s good, isn’t he? At what he does, it’s often unpopular and blatant, but he’s good. I’m writing this in reaction to today’s Chelsea result, and if he keeps West Brom up it will be some achievement- not forgetting it’s largely his fault for much of their predicament – Bilic was sacked early enough.

I’ve read ex Bolton players and staff talk about how revolutionary he was, and his CV since is strong – indeed good enough to get his dream gig before a pint of wine messed that up. How highly will he be remembered in “Barclays Premier League ” terms? I can’t believe I’m typing this, but is he the greatest English manger it’s had?

Sterling rebuttal
Let’s be clear about Raheem Sterling (from a City fans point of view). He’s an incredibly frustrating and a challenging player to defend at times but to say he hasn’t improved since leaving Liverpool would be plain wrong. He’s evolved from a teenage prodigy to a fully fledged England international, almost guaranteed to start at the Euros, who scored VITAL goals for Manchester City in every season and competition he’s played in, from poachers efforts against Real Madrid to curling it in from the edge of the box against Southampton in injury time to win the game.

He’s scored the winning goal in many important Manchester City games such as the win against Bournemouth that started a 19 game league winning streak, Feynoord in the Champions league and the winning penalty in the league cup final. He handles pressure well, he’s more intelligent with his movements and passing, and has played as a 9, false 9 left winger and right winger. He defends with passion and tenacity and understands how to engineer a tap-in, in my opinion he’s an invaluable asset for Manchester City and England.

Yes he misses stupid chances in important games like against Lyon and in the draw against Burnley a few seasons ago that saw him get subbed off, but he’s more than pace and a tap-in, he’s a positive character and has even captained City before. You could argue he was overpriced at the time but I think in the current market £50 would be considered a very good deal for Raheem Sterling, and I think we’re much better off for it, if the red scousers are happy then it’s a win-win-win and maybe we could stop talking about it?

I have to say, some of you English are a funny bunch. Especially Southgate.

First and foremost Sterling is an amazing footballer. Saying he is average or ‘hasn’t improved since Liverpool’ sounds like sour grapes with a touch of something else. Seeing as he never scored 20 goals in a season for the pool makes me think that person doesn’t.

Also, Sane has out performed Sterling only twice in the last five years. He is younger and he is English. I know who Man City would still prefer.

Same with Kane. What a player. Doesn’t get the love he deserves.

Then there is Southgate and this weird love for him. I can’t really see why other than the fact he is English and not Big Sam. The football is generally pretty dire, you could argue England’s biggest strength is her attack and yet he plays very defensive football. 3 at the back with a right back? Okay sure.

I also have a feeling he really doesn’t like Man Utd players for some weird reason. There was a time if you were English and in the United team it was enough. I guess starting for the team that is in second means you deserve to be behind the shot stoppers of Burnley, the not so shot stopper of Everton and the wonderful crossers of Chelsea.

What’s that you say? He got to the Semi finals. Well yes, yes he did. But looking back at it, it was a. Extremely fortunate, and b. Lucky the tougher teams were on the other side, and lastly c. You still lost to an inferior Croatian side.

Solid defensively with lots of pace in both directions. Two creative players to supply a juicy front three and Shaw as wide support.
Plus 4/6 defenders(hopefully 5/6) are on the same team thus giving more continuity to the back line.

You could also rotate against different opponents. Kane dropping deep, sterling as a false 9, Mount as a false nine, so many options.

Anywho, just some thoughts.
Calvino (Ps, I like the pace and power of Tomori over Stones ball playing skills)

One of their players is down for treatment and Arsenal’s phsyios are on. The water bottles have Arsenal logos over whatever branding was there before. Is their a worse badge in the league?

I liked Arsenal’s old badge. The new one just envokes thoughts of the early ‘00s like crap ringtones, music channels and the emirates.

This is obviously a bit flippant, but surely that badge is synonymous with Arsenal dying as the club they were. No more marble floors, just meh – this from a Chelsea fan.
Paul – (big sam’s smug face, there’ll be no match of the day for me tonight)

Covid questions
Now that there is light at the end of the Covid Tunnel, it’s worth considering the likely fallout for our beloved game.

Like most of the world, the sport had to rapidly adapt/experiment at a level previously unheard of. The past year has proven that the show CAN go on, even despite a) Something as serious and wide-reaching as a global pandemic, and b) Without Fans.

So, what does the collective wisdom of the mailbox feel about the likely consequences/scenarios of the two conclusions above (and please add more clear conclusions too).

Thanks
The Big P, Vancouver