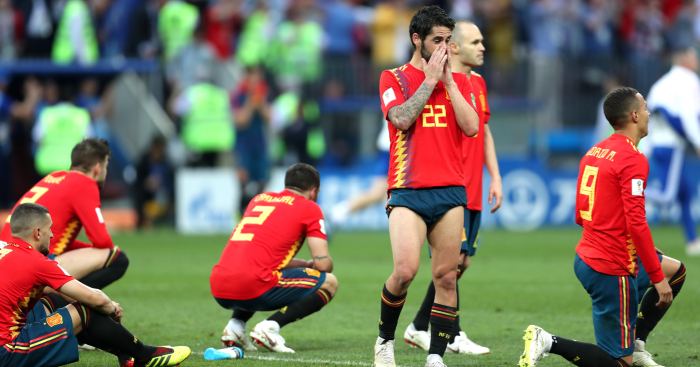 With the Spanish squad now back home after their disastrous World Cup campaign, the inquest has well and truly begun.

Every day since the calamitous performance against Russia which culminated in a penalty shoot-out defeat on Sunday, the Spanish sports media has been deep in discussion over who is responsible for la selección’s latest major tournament failure.

Some have blamed Julen Lopetegui for taking the Real Madrid job on the eve of the tournament, while others point the finger at Real Madrid president Florentino Pérez for tempting him to do so. Many blame RFEF top dog Luis Rubiales for firing Lopetegui. For some, Fernando Hierro and his tactical deficiencies are responsible, while for others the culpability lies with the underperforming players.

In truth, all are contributors to Spain’s demise. Each was a factor in the perfect storm that caused Spain to meekly retreat from Russia having been among the pre-tournament favourites.

Lopetegui lit the fuse by negotiating with Real Madrid behind the RFEF’s back, and reneging on the new contract he signed just a month before the tournament began. The timing of the announcement of his move, just two days before the tournament began, couldn’t have been much worse. He must surely have known the controversy it would cause and the pressure it would put on the team.

The timing, though, was down to Florentino Pérez. He has absolutely no duty to look after the interests of the national team, but his actions undoubtedly contributed to the debacle nonetheless. He could have kept a lid on the news of Lopetegui’s appointment until after the World Cup, but from his point of view an immediate announcement was needed to project an image of stability in his own domain.

Rubiales, on the other hand, was perhaps the largest contributor to the chaos. Although Lopetegui’s post-tournament departure would have come as a surprise to members of Spain’s squad, it was not so earth-shattering that it would have interfered with squad unity or undermined their attempts to regain the World Cup. Rubiales’ decision to sack him, however, did just that. It seems that Rubiales, having only been in his role for a month, wanted to make a power play. His pride was damaged by Lopetegui going behind his back, and he was willing to significantly disrupt his country’s chances of success to protect his own pride.

The man Rubiales chose to replace Lopetegui, Fernando Hierro, had an almost impossible job. He was tasked with restabilising a shaken squad, all the while trying to strike a balance between imposing his own style and not deviating too far from Lopetegui’s system. His lack of managerial experience and tactical nous ultimately told, with Spain’s toothless tiki-taka being exposed by Russia. Midfielder Koke Resurrección put it best: “With Lopetegui, our leader was gone. Hierro just did what he could.”

But the players themselves cannot be absolved. With the possible exception of Isco, none of the players played to their best, and the team suffered as a result. David de Gea only saving one of the seven shots he faced at the tournament is startlingly poor for a man of his usual brilliance. In midfield, Andrés Iniesta and David Silva had none of the incision that usually makes them such dangerous opponents. Veteran centre-backs Sergio Ramos and Gerard Piqué were unusually error-prone as well, and lacked discipline when it was needed most.

No one single person was to blame for Spain’s disastrous tournament. In fact, the opposite is true. It was very much a collective failure – more or less everyone involved has to shoulder some of the responsibility. There were almost no positives to take from the experience, other than to learn from the mistakes that were made.

After a period of introspection, Spain will need to move forward in a new direction. There will now be a raft of retirements from the playing staff, and the last vestiges of the all-conquering side of 2008 to 2012 should now be left in the history books.

Whoever takes over as permanent manager must bring his own style and philosophy to the job, just as Lopetegui did when he succeeded the legendary Vicente del Bosque two years ago. The likes of Luis Enrique, Quique Sánchez Flores, Míchel and Marcelino have been linked with the job, and each of those men has certain qualities that could make them successful in the role.

Despite their failure in Russia, there has arguably never been a better time to take the Spain job. Whoever takes over will be able to throw off the heavy burden of former glories that have increased the level of expectation on the national side. There are plenty of young, talented and eager players available to the new manager, and whoever gets the gig will have a wonderful opportunity to dissociate from the past, and lead the national side into a bold new era.