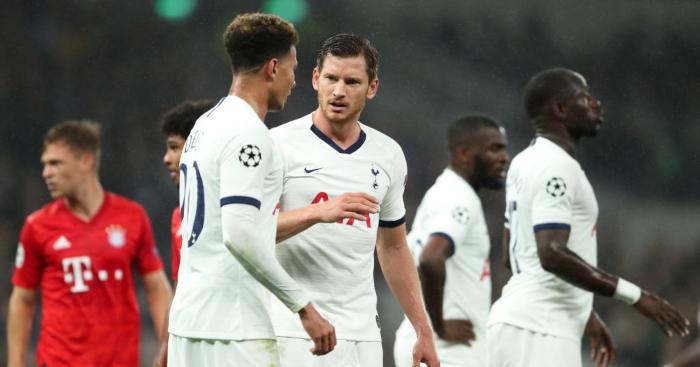 Tottenham defender Jan Vertonghen says he and his team-mates let the club down after their 7-2 Champions League humiliation against Bayern Munich.

Robert Lewandowski grabbed a brace and Joshua Kimmich also found the net as Spurs conceded seven goals at home for the first time in their history.

“It was a painful night for us,” the Belgium defender said. “They punished us with every single mistake we made and we let the fans and everyone at the club down with this result.

“Bad. Everyone is ashamed of this result. There’s not too much I can say about this.

“I think everyone will have a bad night’s sleep and probably a couple about this.

“I feel extremely hurt. All negative words. It is embarrassing. It is a very bad result.”

Things started off well as Son Heung-min opened the scoring and even after Kimmich’s quickfire leveller Spurs were the better side, but could not find that crucial second goal.

Lewandowski’s effort on the stroke of half-time to put Bayern in front proved pivotal as they ran riot in the second half, scoring five times with a Harry Kane penalty wedged in between.

The defeat does nothing to alter the perception that all is not well at Spurs this season, but Vertonghen’s central defensive partner Toby Alderweireld has called on his side to be “men” in their response to the hammering.

“It is up to us to try to change it as quickly as possible,” he said.

“We have to try and get ourselves up as quickly as possible. Of course we did not say a lot, everyone was quiet.

“We have to manage it as a team, be together and work hard to pick ourselves up and try to get out of this situation as quickly as possible.”