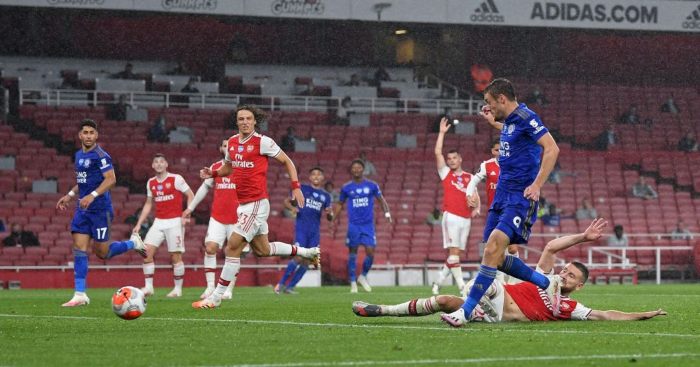 The Gunners looked on course for a fourth straight Premier League win after Pierre-Emerick Aubameyang opened the scoring and the home side then created a string of chances to kill off the game.

Instead they had to settle for a 1-1 draw as Vardy scored with six minutes remaining, soon after Arsenal had been reduced to 10 men following the dismissal of Eddie Nketiah.

However, Cole reckons Mustafi should take the blame for the goal as he failed to cut out the space for Vardy.

“Yes he is good even with his back to goal, he can swivel and shoot, but you can’t give players like Vardy – who thrive off that little space in behind – chances to get across you.

“They’ve got to all be compact, balanced and cover each other. And you know you’ve got to block that space. It’s too easy. It’s a great cross, but…”

Speaking about Demarai Gray – who assisted Vardy for the equaliser – being on the ball, Cole added: “I’m seeing both of them. If I’m Mustafi, I’m maybe getting my arm out, I can see Vardy but I’m also covering David Luiz and then that will give Bellerin a little more time for cover. Now look at that, there’s five of them all on the same line.

“So I’d be like, ‘Okay, let him cross it, I’ll cover the space. Anything that comes here, bang, left foot, it’s out of the park’. But you’ve got to cover the danger. They don’t cover the danger and that’s what happens.”