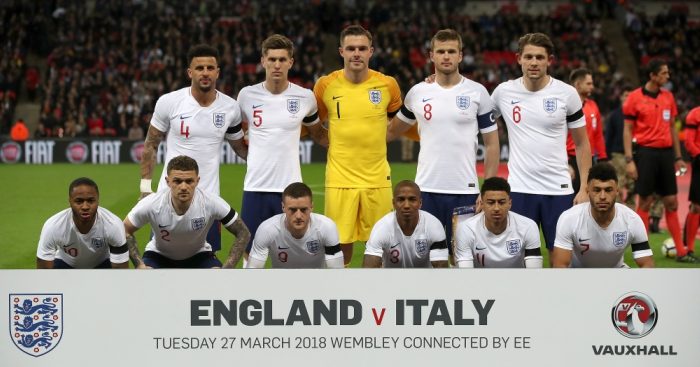 JACK BUTLAND
Could easily have conceded three times in the first 15 minutes, but then was mercifully quiet until the late penalty. Hardly made a save of note and his distribution was excellent, but still believe that he’s behind Jordan Pickford in the queue. Sorry Jack.

JAMES TARKOWSKI
The doubts about his ball-playing evaporated quickly, and this would have been an excellent evening’s work were it not for the late penalty award. I’ll don the tin hat before carrying on, but I think the correct decision was to award a penalty kick. I also think it’s a nonsense that something open to interpretation can be referred to VAR, but Tarkowski stood on Federico Chiesa’s foot in the penalty area. It’s a foul.

JOHN STONES
Endured a horrendous start to the game in which he twice lost possession on the edge of his own box and should have assisted two goals for Ciro Immobile in the process. Improved markedly from that point on, but the doubts about Stones are here to stay. They won’t go away before the summer, either. Cross your fingers and pray that he comes of age.

KYLE WALKER
Gareth Southgate’s biggest success story of this international break. There was a mixture of derision and frowns when Walker was named as a central defender for the first time in his career in England’s penultimate match before the World Cup squad was named, but he has thrived in the role. Can move forward into midfield when England have the ball, and shuttle out wide to create a back four if Trippier is caught up the pitch and possession is turned over. Put a tick next to the manager’s name.

ASHLEY YOUNG
Good, save for the stupid booking and wild tackle on Davide Zappacosta. It would be far better to have a left-footed player on the left, but Young’s improvement this season is striking and he is in better form than Rose. The overlapping runs ahead of Sterling, when the latter drifted out wide, were the high point.

KIERAN TRIPPIER
The player with the fewest words in my notes on the game. That’s probably a bad thing given that Trippier would like to contribute in the attacking third (he did cross the ball more times than any other player despite playing 59 minutes), but the move of Walker to a central role means that Trippier has a starting role for the taking. Did nothing on Tuesday to make us worry too much about that.

ERIC DIER
Quiet, confident, quietly confident. My assumption was that Dier would start in a back three for England in the World Cup, but Southgate clearly likes his versatility and likes him too in midfield. A 91.9% passing accuracy indicates that Dier mostly recycled possession and shuttled the ball to Lingard or Sterling when they dropped deep, but that’s fine. He will eventually be found out against the best teams in the world, but that’s hardly a cause for huge criticism when he doesn’t play for one of the best.

ALEX OXLADE-CHAMBERLAIN
The least impressive of the attacking midfield collection by a distance, and more evidence that inconsistency is a bigger issue for him than natural talent. Dived for a penalty in the first half, and was often caught wanting too much time on the ball. Bookings in friendlies are usually meaningless, but Southgate will be alarmed that Oxlade-Chamberlain got frustrated enough to get cautioned for kicking the ball away in the first half.

JESSE LINGARD
It may annoy or displease Tottenham supporters, but Lingard may now be considered favourite to start over Dele Alli in England’s first game. Southgate said before the game that Alli did not take full part in training and so couldn’t start, but in the meantime Lingard and Sterling have forged an understanding that must have impressed their manager. The through ball to Vardy was excellent, the runs from deep welcome and the speed of thought to set up the goal exquisite. Nobody has improved their status more over the last two games than Jesse.

RAHEEM STERLING
Love him, love him, love him. There’s something wonderful about a young footballer sucking up all of the criticism and unfair tabloid victimisation and coming out of the funk better than ever before. It is a tribute to both Sterling’s ability and resolve that he is again so vital to the success of this side. England’s best attacking player for the second game in a row, and delighted in the space afforded by playing as a second striker. He’s taking on his man, he’s trying flicks and tricks and he’s not letting little setbacks get him down. Good on you, fella.

JAMIE VARDY
Well well. I’ve stated my Big Jamie Vardy Opinion already, and there’s no doubt that he needed a goal to avoid me looking more stupid than normal. But this is the thing: Against better teams that will press England high up the pitch and dominate possession, there is reason to think that Vardy really might be the man for the job. The way in which he sits on the last defender’s shoulder just works, and his movement is outstanding. The finish wasn’t bad either, and Vardy has now scored five of his eight international goals against Germany, Netherlands, Wales, Spain and Italy.

ADAM LALLANA (on for Oxlade-Chamberlain, 59)
A player who rises up to England performances, and useful in that he can play on the right or centrally. Looked rusty, but that’s because he is rusty. Must now go back to Liverpool and add to those three league starts this season.

DANNY ROSE (on for Trippier, 59)
Only Sterling completed more dribbles for either team than Rose, who twice memorably slalomed past two players. Shame the lesser performance against Netherlands is the one that lingers in the memory longest.

MARCUS RASHFORD (on for Vardy, 69)
Ten touches, and none of them memorable. Although he was introduced as England were sitting back.

LEWIS COOK (on for Lingard, 70)
Made his Grandpa a massive wedge of cash. Get the Werthers in, big man.

JORDAN HENDERSON (on for Stones, 73)
Oh, Henderson came on did he? No notes.