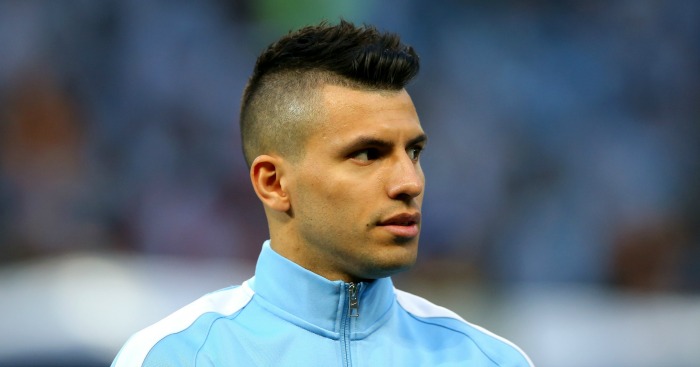 With the season rapidly approaching, the upcoming Premier League campaign promises to be one of the most exciting in recent years. A plethora of talent now graces England’s top tier and there are a number of contenders for the title. WhoScored.com analyses the race to win the Golden Boot…

Jamie Vardy’s decision to reject the advances of Arsenal this summer came as a huge boost to Leicester, with the England international instead penning a new four-year deal at the King Power Stadium. Vardy once again proved his worth to the club with the equalising goal in Leicester’s Community Shield defeat to Manchester United, capitalising on a poor Marouane Fellaini backpass to round David De Gea and score.

The 29-year-old was directly involved in more goals (30) than any other Premier League player last season, while his conversion rate (20.9%) was better than any other player to score ten or more English top-flight goals last season. While at one point it seemed as though Vardy would secure the individual accolade, his 24 goals wasn’t enough to secure top place in the Golden Boot running. Instead, Harry Kane, with 25, pipped him to the finish line.

Kane endured a thoroughly underwhelming Euro 2016, with the Tottenham man rightly criticised. Nevertheless, last season was incredibly successful. After a superb first campaign under Mauricio Pochettino, Kane defied his doubters to avoid second season syndrome. That was all the more impressive given the 23-year-old scored just one goal in his opening nine Premier League appearances last season.

Despite a slow start Kane flourished, and it’s little shock that he comes into the season as one of the favourites to finish top goalscorer once more. Only Philippe Coutinho (4.3) averaged more shots per game than Kane (4.2) in England’s top tier, with the Englishman confident in his ability to consistently test the goalkeeper. Having started all 38 league games last season, there is the risk of burnout for Kane, though the capture of Vincent Janssen eases concerns of tiredness setting in. 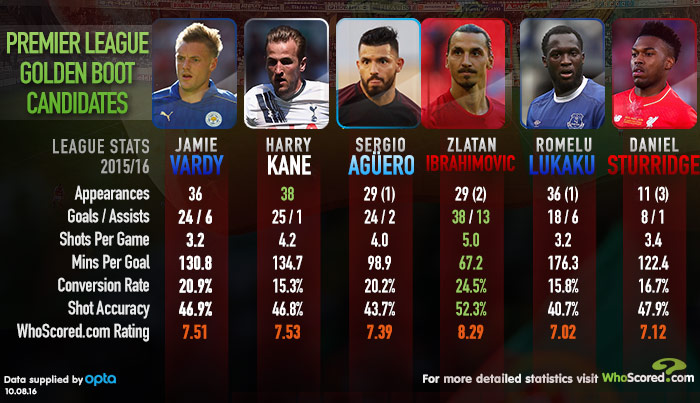 Perhaps Kane’s toughest competitor for the race to finish as top goalscorer is Manchester City’s Sergio Aguero. Pep Guardiola has one of the most lethal strikers in the world at his disposal, having netted every 98.9 minutes in the Premier League last the season (the most prolific return of those to score ten or more goals). Aguero has the ability to fire himself to individual accolades and domestic and continental glory for City.

Only Vardy (18) scored more goals from open play than Aguero (17) in the Premier League last season, despite the former making six more appearances. The Argentinean won’t be without his fair share of chances to break the 20-goal barrier for the third successive season, especially as City are fully expected to dominate matches. Aguero is the favourite to earn the Golden Boot award and for good reason.

Still, it is impossible to discount Zlatan Ibrahimovic. The Swede was Manchester United’s second summer signing and has scored two goals in his three appearances already, including the winning goal in Sunday’s 2-1 Community Shield victory. The only Premier League newcomer among the favourites to win the individual award, Ibrahimovic was a force to be reckoned with in his final campaign for PSG. Indeed, only Luis Suarez (40) netted more goals than Ibrahimovic (38) in Europe’s top five leagues last season to givw him a WhoScored.com rating of 8.29. In Ligue 1, meanwhile, only Fabinho (6) netted more penalties and it’s expected that Ibrahimovic will again be on those duties for United. Who’s going to take the ball off him?

There are a handful of outside candidates to top the goalscoring charts come May, with Romelu Lukaku and Daniel Sturridge among those. The former netted a respectable 18 league goals last season, yet endured a profligate end to the campaign. Nevertheless, a host of Premier League teams remain interested in Lukaku, who has the ability to put any defence to the sword. The same applies to Sturridge; despite spending much of the season sidelined, he managed eight goals from 14 league appearances.

The major concern surrounding the Liverpool striker remains his fitness issues. In his three full league seasons at Anfield, the 26-year old has started just 44 of a possible 114 games. If he can steer clear of injury, the Englishman remains one of the most efficient frontmen in the league. Remaining fully fit is easier said than done for Sturridge. Given Jurgen Klopp’s high pressing demands for Liverpool, it would take a minor miracle for Sturridge to remain fit enough to launch a prolonged assault for the Golden Boot.