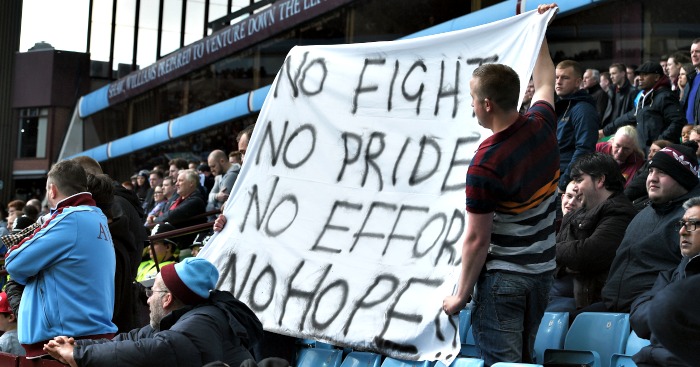 Little changed post-Remi Garde for Villa as their inevitable relegation from the Premier League drew ever closer after a home defeat to a much-changed Chelsea side.

It seems Villa’s 29-year stay in the top flight will peter out with a whimper at some point this month, despite caretaker boss Eric Black’s rallying call for the players to try to restore some respect in the shirt.

Ruben Loftus-Cheek, debutant Alexandre Pato and two goals from Pedro inflicted a 22nd league loss on Villa, whose fans held up placards reading ‘Proud History What Future?’ in protest at the club’s dire predicament with 74 minutes on the clock to symbolise the club’s formation in 1874.

Alan Hutton’s late red card confounded Villa’s afternoon, although he was applauded by some home fans as he made his way to the tunnel – presumably for showing some heart and fight.

For large parts of the game there was a slow and almost end-of-season feel to proceedings with both teams entering the home straight of hugely disappointing campaigns, although Chelsea did not need to reach top gear.

April 2015 saw Villa secure a place in the FA Cup final and all looked rosy for this season while Chelsea were in even better shape en route to the Premier League title. Almost 12 months on, however, Villa are destined for the Sky Bet Championship and defending champions Chelsea entered Easter contesting no silverware.

Both clubs will have a new manager next season and their players are playing for their futures, although while Garde was this week freed from the misery the anguish will continue for Villa fans until their relegation is confirmed. It will not be long now.

How much Chelsea want to qualify for the Europa League is up for debate and Guus Hiddink named an experimental side with Loftus-Cheek and Kenedy starting, as well as Loic Remy. Injuries to John Terry and Gary Cahill also saw young American Matt Miazga make his debut.

Chelsea controlled possession early on but almost at walking pace, without really threatening. Pedro went close after 11 minutes with a shot from the edge of the penalty area which narrowly missed the top corner and clipped the top of the net.

At the other end, Thibaut Courtois smothered a stinging low shot from Rudy Gestede.

Chelsea were forced into a change in the 23rd minute when Remy hobbled off. Pato came on. Three minutes later Loftus-Cheek steered home Cesar Azpilicueta’s cut back from the right at the near post, with a flick off Joleon Lescott taking the ball past Brad Guzan.

Chelsea survived a scare just after the half-hour mark when Courtois parried a Carles Gil shot and the rebound against Jordan Ayew popped straight back into the big Belgian’s hands.

Guzan did well to deny Baba Rahman from point-blank range but he was beaten by Pato in the final minute of the first half after Aly Cissokho had barged into the back of the Brazilian striker.

Less than a minute into the second half and Chelsea had a third. Pato and fellow substitute Oscar, on at half-time for Kenedy, combined down the left side of the penalty area and Pedro turned in Oscar’s low cross from close range.

Pedro had his second of the game in the 59th minute. Pato was involved again. His curling shot was saved by Guzan but he did not get enough on it and Pedro clipped in the rebound from an acute angle inside the six-yard box.

Villa fans protested for the third home match running in the 74th minute, holding up their placards and singing “You’re not fit to wear the shirt.“

Hutton was shown a second yellow card after 85 minutes for a hard challenge on Loftus-Cheek.