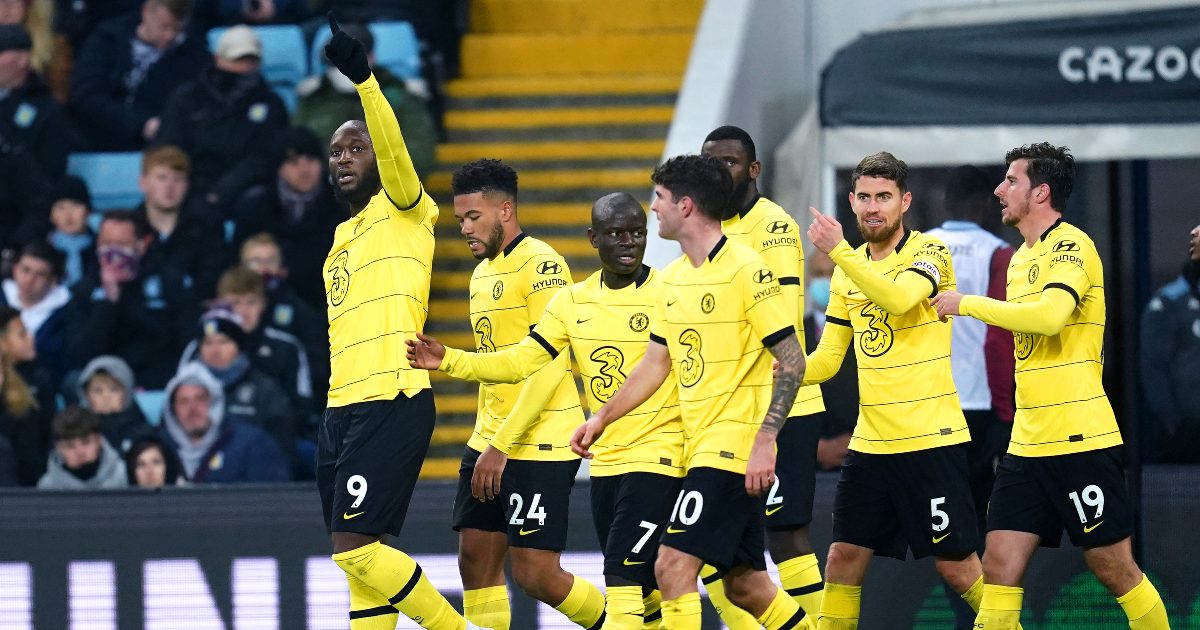 Romelu Lukaku came off the bench to score for Thomas Tuchel’s Chelsea against Aston Villa on Boxing Day.

Lukaku scored his first league goal since September as Chelsea came from behind to beat Villa 3-1.

The forward also earned his side a late penalty as he helped the Blues turn the game around.

F365 says: Lukaku can win the Premier League for Chelsea

His first season back in England has been hampered by an ankle injury but the Belgium international now has two in his last three games to offer Thomas Tuchel a welcome boost after Chelsea dropped off the title race pace.

They now sit six points behind Manchester City and level on points with second-placed Liverpool.

Jorginho’s first penalty had earlier cancelled out Reece James’ own goal as Villa ran out of steam after an impressive opening half to remain 10th.

Without their boss Steven Gerrard, absent after contracting Covid, the hosts initially went about their business efficiently and with purpose on Boxing Day.

Without midfield enforcer John McGinn, so often the driving force, there was still an energy and ingenuity from the hosts and only Trevoh Chalobah’s fine recovery block denied Ollie Watkins after 19 minutes.

Mason Mount’s curling effort bounced off the top of the bar yet Villa broke the deadlock after 28 minutes.

There was a huge slice of fortune, though one Villa deserved, when James rose to meet Matt Targett’s left-wing cross but only succeeded in diverting it over Edouard Mendy and into the far corner.

On the balance of play it was a fair lead but Villa gifted Chelsea a way back six minutes later when Cash recklessly dived in on Callum Hudson-Odoi in the area and Jorginho stepped up to convert from the spot.

Villa remained undeterred and continued to stretch the visitors, with Mendy needing to rush out to clear at the feet of Watkins.

Another Chalobah block kept Ings out and Tuchel would have been wary of the space Villa were creating.

Three wins in their previous eight games in all competitions have seen Chelsea stumble consistently for the first time under Tuchel.

There is no real jeopardy or threat to their place in the top four – they are 11 points clear of Tottenham in fifth – but Tuchel was concerned enough to replace Chalobah with Lukaku at the break.

It changed Chelsea’s gameplan and there was little surprise when he ended his Premier League drought after 56 minutes. Hudson-Odoi’s excellent cross found the striker drifting in ahead of a dozing Tyrone Mings and he expertly glanced in from seven yards.

Mount should have added a third soon after when he beat Martinez to the ball but, with four defenders between him and the goal, dragged wide.

Villa had struggled to maintain their first-half momentum and managed to up the tempo with 15 minutes remaining, but with little progress as Anwar El Ghazi’s strike failed to trouble Mendy.

But fittingly, after a smart Martinez stop denied Hudson-Odoi, it was Lukaku who made the telling impact once more in stoppage time. Ezri Konsa brought him down and Jorginho wrapped up the points from the spot.