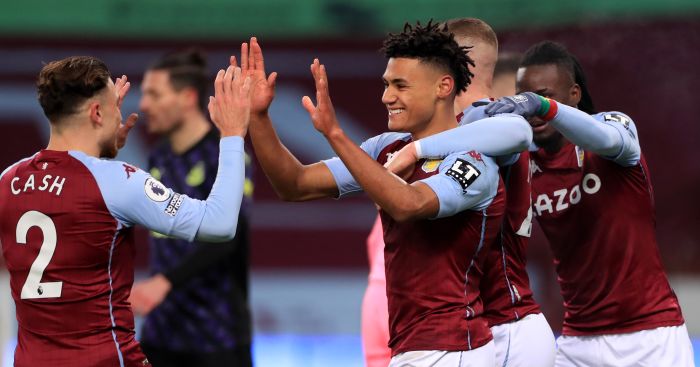 Ollie Watkins ended his goal drought as Aston Villa returned to winning ways and climbed into the top 10 of the Premier League with a 2-0 victory against lacklustre Newcastle.

The club-record signing scored for the first time in 10 matches to set Villa on their way to all three points with an early strike, before Bertrand Traore doubled the lead before half time.

Villa boss Dean Smith watched from the stands as he served a one-match touchline ban after he was charged by the FA for using abusive and/or insulting language towards referee Jon Moss during the controversial defeat at Manchester City.

He will have been pleased with what he saw, after picking up only one pick from games against Chelsea, Manchester United and City in the Premier League, as Villa moved up to eighth in the table.

For Newcastle, the downward spiral continued and Steve Bruce’s team have dropped to 16th spot after a sixth defeat in a eight-match winless run in the Premier League.

There were a couple of warning signs for Newcastle, before Villa scored after 13 minutes.

Karl Darlow had to smother Matt Targett’s effort from the edge of the box before a dangerous cross by the left-back just eluded Watkins as he tried to get a touch at the near post.

It was another Targett cross that brought the opening goal shortly afterwards.

Fabian Schar attempted to clear the danger but could only slice the ball into the air inside his own penalty area. The ball looped goalwards and Watkins reacted quickest ahead of Darlow to bravely nod the ball home.

Newcastle were struggling to defend crosses into their box and Ross Barkley came close to quickly doubling Villa’s lead but his glancing header from Traore’s free-kick flew inches wide.

At the other end, Tyrone Mings was in the right place at the right time either side of the half-hour mark to block Jamaal Lascelles’ goalbound header following a Jonjo Shelvey corner, before then getting in the way of an Andy Carroll header.

Getting back into the match would have flattered Newcastle and Watkins saw another effort correctly ruled out for offside before Villa deservedly doubled their lead just before half time.

Traore started and finished the move. The 25-year-old showed good control and quick feet to find Jack Grealish down the left side of the penalty area before continuing his run into the box, where he was picked out by a brilliant cutback.

Traore used the pace on Grealish’s pass to guide his shot into the top corner, with the ball striking the underside of the crossbar on its way into the net.

There was another let-off for Newcastle at the start of the second half. Darlow denied Watkins but Jamal Lewis gave the ball straight back to Douglas Luiz on the penalty spot, however the Brazilian midfielder scuffed his shot and missed the target with the goal at his mercy.

In a continuation of recent performances, Newcastle were offering little as an attacking force – lacking imagination and intent in the final third of the pitch.

The same could not be said of Villa and Barkley’s brilliant piece of improvisation, backheeling the ball towards goal after Watkins’ header was slightly behind him, almost brought a third goal but his effort went narrowly wide.

Grealish might feel he should have done better than curl his shot wide when afforded time and space inside the area midway through the second half.