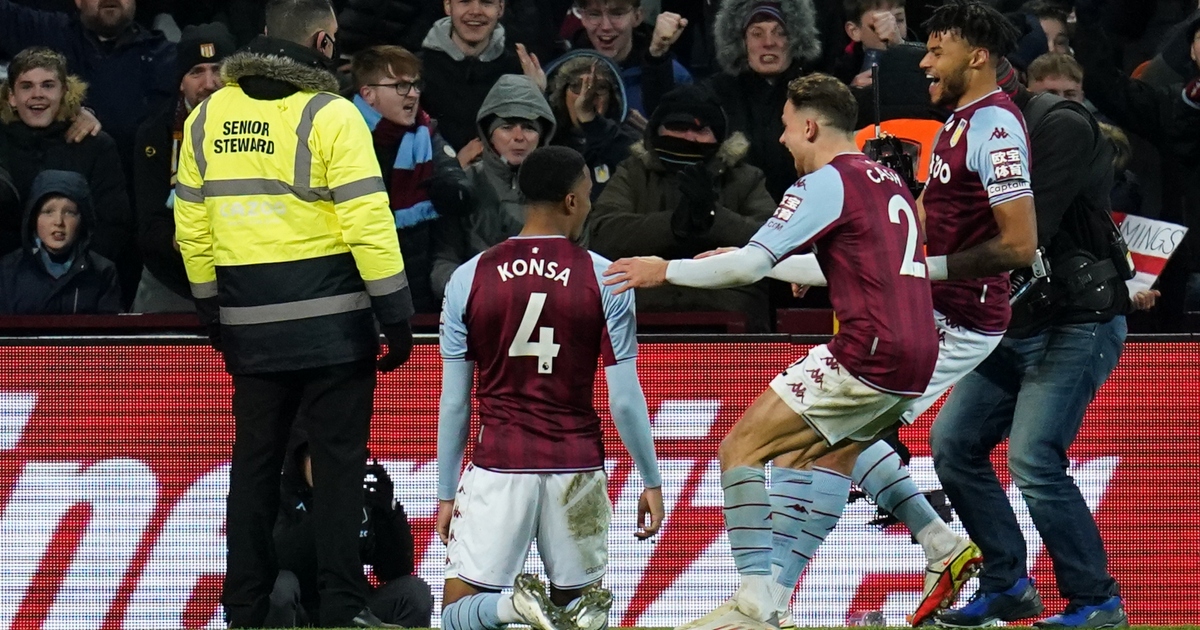 Ezri Konsa scored a brace as Aston Villa came from behind to beat Leicester City 2-1 at Villa Park.

The defender’s first goals in 13 months – in front of watching England boss Gareth Southgate – earned a combative 2-1 win over the Foxes.

Aston Villa have won three of Steven Gerrard’s four games in charge since he replaced Dean Smith last month to lift themselves up to 10th in the Premier League and above Leicester.

Jacob Ramsey was denied a first-half goal by VAR, a decision which inspired Aston Villa to their fine second-half display which ultimately sealed the game.

The Foxes had led through Harvey Barnes but continue to stutter, just as it looked like they had rediscovered some swagger recently.

Boss Brendan Rodgers gambled and started Jamie Vardy on the bench, citing squad rotation, and his replacement Patson Daka made an early impact when he teed up Barnes for a 14th-minute opener.

The Zambia international bustled his way past a couple of Villa challenges before finding Barnes on the left and the winger showed great composure to stroke the ball into the bottom corner.

Jonny Evans failed to clear Douglas Luiz’s free-kick and Matty Cash headed the ball back into danger. Emi Buendia nodded it goalwards and the stretching Konsa got the finest of touches before it dropped into the corner.

The two clubs have desires to challenge the elite – Leicester already have – and with the appointment of Gerrard Villa outlined their lofty ambitions and the teams traded blows as they look to keep pace with the top six.

Villa then thought they had turned the game on the stroke of half-time, only to be denied by VAR.

Cash headed back Douglas Luiz’s cross which Schmeichel attempted to claim before Ramsey smashed in from close range.

Leicester were adamant Schmeichel had control of the ball before the midfielder lashed it into the net and VAR official Paul Tierney asked Michael Oliver to look at it as he deemed the ball under Schmeichel’s control, pinned to the ground – a call Oliver agreed with and disallowed the goal.

It incensed Villa Park, despite being a fair decision within the rules, and the aggrieved hosts came out for the second half with renewed purpose.

Ashley Young curled well wide four minutes after the break and Thomas made a crucial block from Ollie Watkins – only for Villa to grab the winner from the resulting corner. John McGinn’s deep delivery found Konsa towering over Caglar Soyuncu and he squeezed a header between Schmeichel and the post.

It was the 10th set-piece goal the Foxes had conceded this season and the issue now threatens to hold Rodgers’ side back.

Villa’s aggression, though, had been too much for the visitors and while Maddison went close from the edge of the area they lacked imagination to recover.

It was Villa who had the initiative and Schmeichel thwarted Watkins before Ramsey skied horribly over with just the goalkeeper to beat.

Vardy was sent on by Rodgers but it was Barnes who nearly grabbed a leveller with 15 minutes left, only for Martinez to brilliantly turn his looping header over.