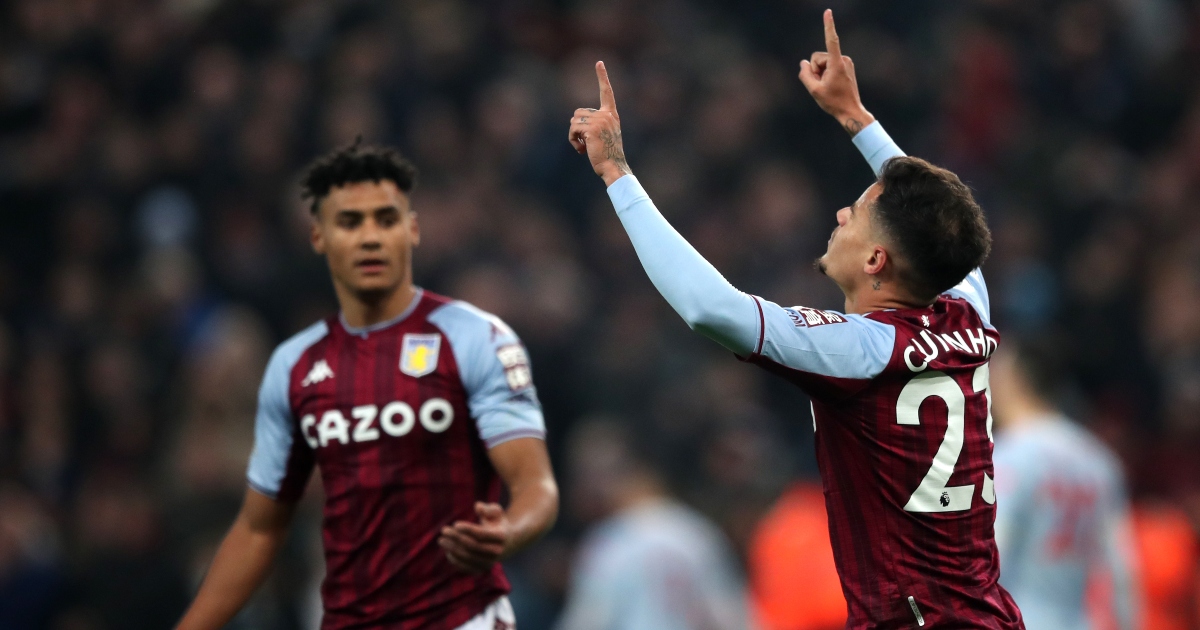 Philippe Coutinho made an instant impact as he came off the bench to lead Aston Villa’s fightback to draw 2-2 against Manchester United.

Having started the week by edging through to the FA Cup third round with a somewhat fortuitous win, Ralf Rangnick’s side looked on course for another hard-fought victory against Villa on Saturday evening.

A howler from Emiliano Martinez gifted Bruno Fernandes an early opener and the stand-in captain fired United further ahead at Villa Park, only for new boy Coutinho’s introduction to spark a fightback.

The former Liverpool star was involved in the build-up to Jacob Ramsey’s thumping strike, with the 20-year-old academy graduate then crossing for the Barcelona loanee to level in front of the Holte End on his Villa debut.

It was a wild end to a thrilling, helter-skelter encounter that United started impressively, yet they failed to build on Fernandes’ hopeful 25-yard opener as Villa grew in confidence and began to frequently test David De Gea.

Fernandes looked to have won it when he fired home off the underside of the crossbar, but marquee January signing Coutinho helped turn things around on a night when fellow new boy Lucas Digne also impressed.

Villa Park was rocking to its foundation towards the end of the game, but the match started with Fernandes silencing it.

Morgan Sanson – in for the suspended John McGinn – was adjudged to have fouled Alex Telles, who decided against swinging in the free-kick and instead played it short to Fernandes.

The Portuguese continued to hit a hopeful long-range strike that caught out Martinez, who appeared put off by Edinson Cavani and the ball squirmed through his legs.

United continued on the front foot against the shell-shocked hosts.

Anthony Elanga, the 19-year-old making his first league start of the season, rose well to head a Fred cross just wide and Martinez spread himself to block a drilled Mason Greenwood strike.

Telles and Greenwood had further attempts as Villa looked a shell of the side that travelled to United on Monday.

It took 32 minutes for them to muster a shot. De Gea comfortably dealt with that Ollie Watkins attempt, but he had to be in right place at the right time when United’s soft underbelly from set pieces threatened to cost them again.

Digne fired over a corner that Emiliano Buendia was all too easily able to meet with a near-post header that the Spaniard parried, before he then denied Digne with his knees.

Kortney Hause replaced injured Ezri Konsa at the heart of Villa’s defence when the teams emerged from half-time, with Fernandes booked and Elanga testing Martinez inside 80 seconds of the restart.

Ramsey forced De Gea into a save as Gerrard’s men pushed for a leveller, with Buendia and Digne having attempts against increasingly-ragged United.

Rangnick was starting to show his frustration on the touchline, but their youngsters twice went close to extending their lead.

Matty Cash was breathing a sigh of relief when Elanga drove wide from his mistake, before Greenwood drove down the right and struck across the face of goal from an acute angle.

There were signs of Rangnick’s work in the young forwards’ performances, so too the move that led to United’s second.

The team pressed methodically and under-pressure Sanson sent an under-hit backpass that Fred lapped up, with the midfielder smartly laying off for Fernandes to strike in off the underside of the crossbar.

Sanson let out his fury on some touchline water bottles when replaced by Coutinho straight after, with the Brazilian quick to make an impact.

Tyrone Mings burst up the field and the debutant was involved in the intricate build-up play that ended with the ball being prodding into the path of Ramsey to strike in front of the Holte End.

The youngster had forced De Gea into a save shortly before and his goal brought hope to a side that would level in the 82nd minute.

Buendia played through Ramsey to direct a first-time left-footed cross to the far post, where Coutinho turned home to lift the roof off the old ground.

Coutinho’s attempt at a winner was stopped by De Gea and fellow substitute Donny Van De Beek was blocked at the other end as they shared the points.

Perhaps the injured Cristiano Ronaldo has a point about United’s mentality.