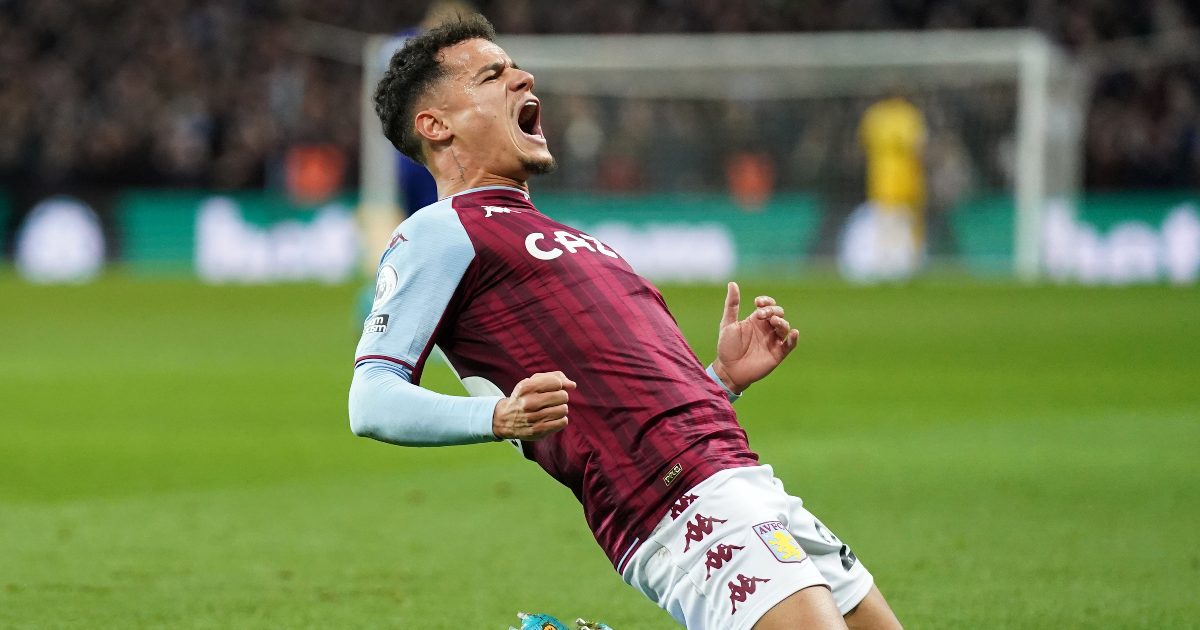 Aston Villa star Philippe Coutinho was involved in all three of his side’s goals as they drew 3-3 against Leeds United at Villa Park.

Diego Llorente equalised for Leeds in the second half as they fought back from being 3-1 down to draw.

Coutinho shone in the first half as he scored and provided two assists for Jacob Ramsey. These efforts cancelled out Dan James’ opener for Leeds inside the first ten minutes.

James made it 3-2 before the break and Llorente ensured a pulsating game at Villa Park ended even.

Ezri Konsa was also dismissed late on for a second yellow card for Villa but Leeds were unable to capitalise.

The draw edged Marcelo Bielsa’s side, now with just three wins in their last 12 games, six points clear of the relegation zone and denied Villa a place in the Premier League’s top 10.

But Villa began brightly enough with Illan Meslier ensuring Llorente did not turn Douglas Luiz’s corner into his own net. Yet the hosts faded quickly, allowing Leeds to grab the initiative and a ninth-minute lead.

Tyrone Mings twice failed to deal with a ball on the right, with a weak first challenge on Mateusz Klich allowing Llorente to steal the ball from him on the edge of the area.

He found James and the winger stepped inside Konsa to drill in low across Emi Martinez.

The goalkeeper then stopped a fizzing James effort while Lucas Digne needed to be alert to clear ahead of Raphinha with Villa on the rocks.

Mings should have levelled but headed Douglas Luiz’s corner wide and the entertainment continued when Jack Harrison’s quick break teed up James only for his rising 20-yard drive to clatter the bar.

There was purpose and pace from the visitors while Coutinho had been anonymous – until he levelled things after half an hour and tore Leeds apart in a devastating spell.

Philippe Coutinho is settling in very nicely at Aston Villa.

He took that goal brilliantly! 💫 pic.twitter.com/0MsFJQ8aMu

Matty Cash was the architect, latching onto Emi Buendia’s pass and crossing for the unmarked Brazilian.

Leeds inexplicably stood off the Barcelona loanee and he was allowed to steer the ball low into the corner for a second goal in three games.

Eight minutes later Coutinho turned provider with a sumptuous assist. He turned Luke Ayling and split the Leeds defence with the perfect pass for the onrushing Ramsey to advance and drill past Meslier.

It was reminiscent of the link-up Steven Gerrard and Coutinho enjoyed at Liverpool and the relationship continued to blossom when Ramsey made it 3-1 six minutes later.

Coutinho was in the mood and led the charge when referee Jarred Gillett played advantage after Digne was poleaxed. Ollie Watkins’ clever run took two defenders with him and Ramsey was left alone to collect Coutinho’s pass and find the top corner.

A flat out first half then concluded when James made it 3-2 just before the break, heading in from point-blank range after Rodrigo’s cross ballooned off Konsa.

Perhaps unsurprisingly the level dropped with neither side managing to make a concerted impression immediately after the break.

But it was a brief lull as Leeds levelled just after the hour.

Pascal Struijk had seen a header cleared off the line from Mings but Leeds regrouped and from their next corner the Villa captain went from hero to villain.

This time he failed to get enough on a clearance following Struijk’s header and Llorente smashed in from eight yards.

Villa had already lost Buendia to injury and needed to rediscover their composure, which continued to elude them when Konsa was sloppy in possession allowing Klich to shoot Martinez.

Leeds, though, were unable to make any further inroads even when Konsa was sent off for a second yellow card with three minutes left for needlessly stopping Meslier releasing the ball.