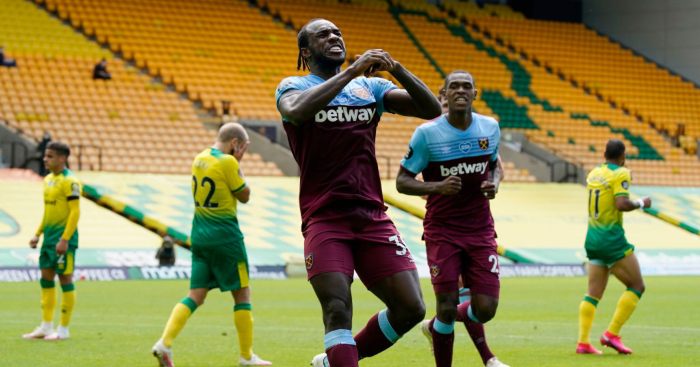 With four teams left vying to avoid the two remaining relegation places in the Premier League, the weekend’s fixtures offered another twist in the tale. Watford and West Ham barely had time to pat themselves on their respective backs before Aston Villa and Bournemouth fired back with wins of their own. It looks to be a dramatic finish at the bottom – in a season that often lacked such suspense at the top of the table.

…but let’s assess the candidates:

The team at a mathematical disadvantage are arguably the biggest club of the four. Aston Villa’s return to the Premier League was meant to be the start of something wonderful; managed by a Villa fan, captained by a Villa lad, nobly playing their part in a League Cup final. Yet the one-time European Cup winners find themselves with an uphill task with three games to go. But the Premier League has seen some bonkers final-day drama – West Brom’s great escape, Bradford beating Liverpool, Tevez’s West Ham heroics at Old Trafford – so there remains hope.

Aston Villa may yet get a chance to join those famous escapes with what could be a final-day shoot-out with West Ham. This most likely relies on them picking up points against Everton or Arsenal, neither of whom looked particularly cohesive at the weekend. Meanwhile, the Villains looked sharp in their win over Crystal Palace, with key man Jack Grealish back to his gliding best. The cocksure midfielder has felt the weight of responsibility this season – demanding the ball from his centre-backs and trying to do it all on his own. Sunday was different however, with the team’s structure looking a lot more balanced. It’s very possible that Dean Smith and his side have already made their bed – but there’s still belief at Villa Park.

Writing nice things about Aston Villa for a change. What a difference a win makes! Every player had the bit between their teeth today. Hourihane was like a man possessed, Elmo excellent, Grealish showing purpose. Smith challenged them all beforehand and they stepped up. #AVFC

After a remarkable performance, toppling Leicester in a 4-1 win to climb a few rungs up the ladder away from the drop, Bournemouth are just about back in the race. Granted, the Cherries have to face a Manchester City side who are fresh from mauling Brighton at the weekend, as well as their south coast neighbours Southampton – who would love to exact revenge for the defeat handed to them at St Mary’s in September – but one imagines that Sunday’s clash was not a fixture manager Eddie Howe had circled as winnable. But this is July and anything can (probably) happen in July.

Bournemouth might also take solace in the fact that Everton are looking mightily Everton-y of late – meaning their 11th-hour survival bid might culminate with them facing an out-of-form Blues side with not a lot to play for.

It’s still looking bleak for the Cherries and while it was refreshing not to again be subjected to Eddie Howe’s ‘PE teacher who’s disappointed you’ve forgotten your kit’ face post-match, you’ve got to fear for the plucky underdogs who have a bigger net spend than Liverpool, Leicester and Tottenham in the last five years.

Imagine if Klopp had an extra £400m to spend? 😂 pic.twitter.com/0yGvD8Vzhm

Watford are perhaps the most difficult team to pin down of this group. General consensus tells you that Nigel Pearson’s arrival had a positive effect on a talented squad that started the season abysmally – but at times this has been difficult to quantify.

When the Hornets sacked Quique Sanchez Flores in December they sat bottom of the table, with eight points from their first 14 games; Pearson has just led the team to back-to-back wins for the first time this season. Like all four of our candidates, Watford managed a win at the weekend, with two penalties from the talismanic Troy Deeney enough to sink a wilting Newcastle side.

Huge victory that, barring a crazy finish for Villa and Bournemouth, all but keeps Watford in the Premier League.

The Hertfordshire club, armed to the teeth with belief from their last two results, have a crunch match with West Ham to gear up for – with their final two fixtures looking decidedly less winnable. That being said, Deeney’s remarks about Arsenal lacking “cojones” two seasons ago ensures every fixture between the two is a fiery affair. Pearson engineered one great escape with Leicester City five years ago – he’ll be quietly confident he’s on track again.

The fourth club still at risk of the dreaded drop are West Ham United – providing the ‘too good to go down’ part of our relegation quartet. The Hammers have, after all, spent lavishly over the last few seasons on some players that at the time looked like astute dealings. Names like Sébastien Haller, Jared Bowen and Issa Diop come to mind.

This hasn’t led to the progression that fans might have expected however and David Moyes – seen as a useful short-term option in 2017 before making way for Manuel Pellegrini – has wedged his foot in the door again on an 18-month contract. The cyclical comedy of the situation is indicative of West Ham in both the sleepy mismanagement and the kneejerk responses to crisis.

Michail Antonio scoring four goals in a single game to relegate Norwich City and lift the team (ever so slightly) away from danger was perhaps their moment of the season thus far – not ideal for a team whose owners outlined a plan for Champions League football ten years ago. Moyes and his band of misfits will be hoping they do enough in their crucial clash with Watford – or even surprise his former employers Manchester United – to avoid making that final-day showdown with Villa a nervous occasion.