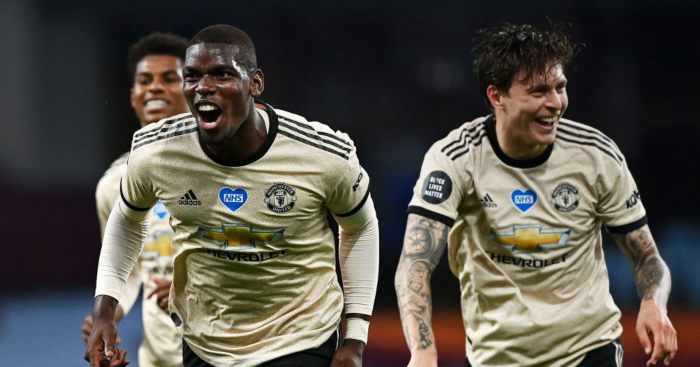 1) Probably the most damning judgement of Aston Villa’s recruitment last summer is that they don’t even seem to have a puncher’s chance in this kind of game. That’s a legacy of how much they had to do, because the squad promoted from the Championship was transient and had far too many holes, but five goals from Wesley (in 20 starts) and one (in nine overall appearances) from Mbwana Samatta paints a vivid and depressing picture.

This team needed a goalscoring pivot to play around, as it had in Tammy Abraham (26 in 40) and the failure to replace him properly, even with another loanee, has been extremely costly. Without those goals, the margins have been far too tight for them and on Thursday night they were beaten from the moment the penalty was given.

2) But the bigger problem has been down the other end. That’s always seemed like more of a system issue, because – individually – the back four starting this match and the various players used in their positions across the course of the season should not have conceded 62 goals in 33 games.

Instead, that statistic probably describes how passive Villa often are without the ball; they allow their opposition to advance up the field while facing little resistance and, in an era of high presses, that makes them an outlier. It’s counter-productive, too, because only genuinely sturdy sides – Burnley etc – can get away with inviting that sort of pressure.

3) Initially, there was more pressure at the top of the pitch and it was really encouraging to see. And effective. Without a regular source of goals or a wealth of creativity, Villa need to mine their chances from other avenues. Shortly after the drinks break, they did exactly that, with Trezeguet nearly capitalising after Paul Pogba was hassled off the ball, deep in his own half. Trezeguet hit the post but, to that point, it had been the game’s clearest opening.

It wouldn’t last, but that energy at the top of the pitch was the basis for a really good 25 minutes for Villa. Before winning the penalty, Bruno Fernandes had barely been involved in the game and that describes just how disrupted United’s supply to him had been.

4) On that penalty: What was Ezri Konsa supposed to do? Fernandes’ attempt at a roulette failed and it was he who initiated the contact. Konsa barely moved and, yes, on the basis that Fernandes was very much the aggressor, he was fortunate not to be booked himself. Or worse.

I’m baffled by that penalty award. Fernandes deliberately runs over the ball and then treads on his opponent and goes down. What am I missing?

5) …and isn’t the pay-off for putting up with VAR’s dull idiosyncrasies meant to be protection from this kind of idiocy?

It was obviously an error, it should obviously have been overturned, and so the failure to intervene is just another blunder from a system which really doesn’t seem fit for purpose and, at the moment, appears overly-concerned with protecting the reputation of an under-talented group of referees.

Some of them are truly atrocious, but they’re now entitled to protection from themselves.

6. Fernandes is a lovely player and he’s been an absolute pleasure to watch, but his role in that incident was less than flattering. Spare us the faux agony, you’re too good.

7. Anyway… this, from our friends at Opta.

16.5% – Manchester United have been awarded 13 of the 79 penalties taken in this season's Premier League (16.5%) – the highest proportion of any side in a season in the competition's history. Gain. pic.twitter.com/uvuGzKjgoD

Thursday night aside, perhaps that statistic is a measure of the new intricacy of this attack. It’s a very tenuous point, yes, but United are now playing a brand of football which is far more likely to draw desperate tackles in the box and refereeing decisions.

8) Goal two: lovely stuff. Mason Greenwood is going to be fabulous and his work in the build-up to his goal is worth a mention. Good timing, good release of the pass.

And well done to Anthony Martial for returning the favour, because for much of his United career he’s been prone to receiving passes at a standstill and then slowing the play down, allowing defenders to gather between him and the goal. Many moves have died at his feet. Over recent weeks, though, a sharper, slicker Martial has emerged to become a more joined-up part of this attack and that change is every bit as important as any other improvement in this side.

He’s a part of the effort without the ball, too. Roy Keane chose to eviscerate Tyrone Mings at half-time and not unfairly so, but surely the pertinent detail was Martial muscling the ball off him forty yards from United’s goal, and then running 70 yards to help complete a move that he himself had started.

Would he have done that a year ago?

9) Martial isn’t a lazy player; that’s not the accusation. What appears to be different is the appetite he’s exhibiting for this role and his suitability to it.

There’s always been a debate about whether he’s truly a centre-forward, but perhaps what that discussion missed was the importance of involving him in those kind of areas. In that sense, the suitability of his attributes to that role is secondary to the value of his literal employment in it, and the changes that has helped to provoke. He’s enjoying his football, that’s more than obvious, and the value to Manchester United is in this broadly talented piece that – as we’re now finding out – can do all sorts of things within an attack.

10) Greenwood’s finish was superb. The switch from left foot to right, the quick dart into space. It was quick, decisive and lethal. Absolute class.

It makes you wonder though. While the case for using Greenwood as a wide-forward makes itself, maybe his future might even be through the middle? He’s certainly going to be good enough in tight spaces and his technical ability is delivered with a forcefulness which would probably suit a more prime position.

He also makes his decisions very quickly. He doesn’t hesitate in choosing an option – pass, run, or shoot – and when he does, he commits to it properly, attacking whatever weakness he’s seen. It’s a useful trait in a wide-forward, but it’s a potentially fascinating one in an evolved, more modern No.10.

Mason Greenwood has been directly involved in a Premier League goal every 70 minutes since the restart and every 100 minutes in total.

11) The real problem with Roy Keane’s ranting is that it devalues him as a pundit. When he does have something pertinent to contribute, as he did about Mings’ defending, his caricatured schtick makes it harder to take seriously. There’s a valuable pundit in there, it’s just encased within this cartoon character most of the time.

12) 0-2 down and the Villa press was gone. From the start of the second half, United were practically able to jog the ball up the field and into attacking positions. Occasionally a single midfielder would hassle a ball carrier – Douglas Luiz or Jack Grealish – but never with enough support to cause United an issue. In fact, one player pressing alone is often worse and the visitors’ dominance proved that point.

Some of their defensive players haven’t been good enough this season, that’s fair, but – strategically – more probably could have been down to protect them, or at least to mitigate some of the weaknesses.

13) There’s nothing like a Paul Pogba goal, because it annoys all the right people. He wasn’t at his most dynamic, but he played with a quiet, technical authority and that neat sidefoot from the edge of the box was an appropriate emblem.

If this was his role at United, would that be so bad? Perhaps he can’t be a consistent box-to-box player in this league, but good things happen when he’s on the ball and – in any case – Fernandes is part of this team now, and able to do much of the roaming on his behalf.

Pogba can score goals, obviously, and he’s also good for a few raking passes, but his short and medium range work is underrated, because he’s excellent at dropping five-yard passes to one side or the other, or knifing a quick ball through an opposition line. If his job is just to keep this team moving forward, then that would be an incredibly valuable function.

14) Jack Grealish’s future is interesting. Especially with United supposedly the favourites to sign him at the end of the season.

But why is that? And with the aim of playing him where? He could certainly compete for one of those attacking positions, but would Solskjaer really favour him over someone like Rashford or Greenwood, or at the tip of the midfield at the expense of Fernandes? It doesn’t seem very likely and so – realistically – United face the prospect of paying top-dollar for an ‘option’ or a first reserve.

In most other years that would make sense, but in the current climate it seems far-fetched.

15) If Villa are to go down, the concern is two-fold. Firstly, the huge outlay last summer has negated any financial benefit of a season in the Premier League. The second, is that – Grealish aside – who within this squad has really done enough to command a big fee and a top-flight future elsewhere?

Douglas Luiz would be a good player in the right system. If John McGinn can prove his fitness and his return to form then he’d interest a few clubs, too, but £14m on Matt Targett looks like a loss the club will have to bear eventually and £22m for Wesley now looks very, very expensive.

16) This was one of those nights when everything remained as it was at kick-off. Villa are doomed by virtue of not being able to do anything particularly well, while United’s are on the rise for real, inspired by a group of players who are suddenly very compelling. You didn’t need to watch the game to realise that.

One last point on Mason Greenwood, though, because this tweet is perfect. Yes, as Dave says, it’s exactly this at the moment.

Every Greenwood goal gives me the same feeling as when Owen scored against Wimbledon in 1997, that undefinable Yeah This Kid’s Definitely Making It sensation. Get him in that squad ASAP, G-South.

(I know G-South isn’t a thing but it should be) https://t.co/uLHII5yrBo

It’s also important at the moment. Football is a slog for now and it will be for the considerable future. Without a crowd, it has just become an exercise in completing a schedule and keeping the rebate wolf from the door.

Greenwood is a distraction from that reality. He’s at the stage of his career where he’s still a mystery and, game by game, he’s beginning to introduce himself and show the array of his talent. That’s a rare privilege; we don’t get to go on those journeys with players very often. This one’s very special.