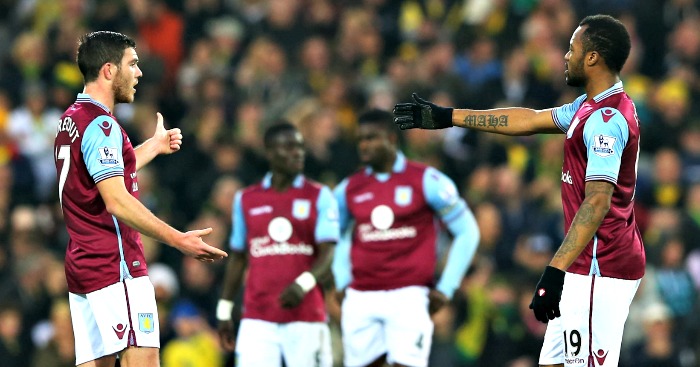 ‘Done. Finito. Over. F**ked.’ By any and all measures, Aston Villa’s fate is sealed. Nineteen games in this most remarkable of seasons remain, but Villa escaping relegation is the most unfathomable outcome of all. A season in which Leicester are level on points with the leaders at the halfway stage, where Crystal Palace sit one point above Manchester United, and where reigning champions Chelsea are bravely staving off relegation teaches us that nothing is impossible. Villa provide a painful anomaly. They are doomed.

Bookmark it, screenshot it, print it off and laminate it: 19 games in, Villa are out.

Inability to secure a first victory since the opening game of the season against either West Ham or Norwich over the Christmas period has not condemned them; not even half a season of terrible performances has truly done that. The club has been afflicted by mismanagement for years. This is merely a culmination of numerous failures from boardroom to pitch.

Blame must be apportioned between Randy Lerner, Doug Ellis, Tom Fox, Hendrik Almstadt, Tim Sherwood, the players and even the relatively untouched Remi Garde. The Frenchman, with no prior Premier League experience, was handed an unenviable task, but four points from eight games is simply not good enough. Nor was Sherwood’s haul of four from 11, ‘transfer committee’ or otherwise.

Yet hopes of a revival linger. They are misplaced, and horribly so. Only one team has suffered a bigger points gap from safety after 19 Premier League games. Sunderland were 13 points adrift in 2005/06 by December, and finished bottom, a further 10 points behind. Since the first 20-team Premier League in 1995/96, only three sides have survived after sitting bottom at the 19-game stage. The ‘miraculous’ exploits of West Brom, Sunderland and Leicester are well-documented, but they were only five, two and three points from safety at this stage. Swansea, in 17th place, are 11 points ahead of Villa. Derby were on seven points and nine behind 17th after 19 games of the 2007/08 season. Villa still need four more points to breach their record low points total.

The finger is pointed firmly in the direction of the owner. Lerner purchased a controlling stake in the club in August 2006, and has overseen close to a decade of spiralling results at Villa Park. An 11th-placed finish in the 2006-07 season was followed by three consecutive finishes in sixth. Villa have placed ninth, 16th, 15th, 15th and 17th in the following campaigns. It has become an oft-repeated statistic that Watford have accrued more Premier League points in 2015 than Villa despite only being promoted in August.

But the rut was carved a long time ago. Since the start of the 2011/12 season, Villa have accrued 163 Premier League points; no ever-present in that period has fared worse. Southampton have 181 points in that timeframe, and were only promoted in 2012/13. West Ham have one point fewer having played three-and-a-half seasons to Villa’s four and a half; Crystal Palace have 39 points fewer in two-and-a-half seasons. Sunderland, perennial strugglers themselves, have won nine points more than Villa since August 2011. Villa’s tally from the 2011/12 campaign to now averages out at 36.2 points per season, enough to finish 17th in each of the last four campaigns. For too long Villa’s survival has been the Premier League’s recurring abnormality, achieved more through the incompetencies of three other clubs, rather than their own efforts. Such luck has expired.

“I owe it to Villa to move on, and look for fresh, invigorated leadership, if in my heart I feel I can no longer do the job,” Lerner said, when announcing he had put Villa up for sale in May 2014. He has ‘owed’ the club, the fans much more for much longer. More glib excuses came a year later this May: “The responsibilities that I have at home in the US both personal and professional come first. I don’t disagree with the (fan) criticism. And what I should have done several years back was bring in a chairman. The club remains for sale. I have had interest from nearly every corner of the globe.”

But what investor, sound of mind and bulging of wallet, would maintain an interest in Aston Villa? This is a club destined for the Championship, with a largely uninspiring and inexperienced playing staff, a wage bill not suited to second-tier football, and a boss whose management career extends to one previous club.

On the other hand, this is the fifth most successful English side ever, a former European champion, one of seven Premier League ever-presents, a club with a proud record of producing youth players, with the eighth biggest stadium capacity in the country, and with a set of fiercely loyal fans. Fans who deserve better. If Steve Parish can claim Crystal Palace have the “biggest potential of any single football club in the country”, what of Villa? The club has spent over £120million on players over the past five seasons; only eight clubs boast a bigger outlay. With this comes the caveat of net spend, with Villa spending less than £7million on average per season, more than only Everton and Spurs of the fellow ever-presents. If 11th is seen as gross under-performance for the former, how can Villa’s diabolical last five years be described?

January often provides struggling sides with an opportunity for respite, but such transfer profligacy only threatens to deepen Villa’s mire. Only five clubs spent more on players in the summer, but just Liverpool and Manchester United generated more through sales. Villa spent £52.5million on 12 players in preparation for this season; ‘over-achieving’ sides such as Leicester, Crystal Palace, West Ham and Watford all spent around £20million.

“I’ve got some ideas on players who hopefully could still believe we can improve,” said Garde earlier this week. “Aston Villa is still an attractive club for some players. You can find players who fight everywhere in Europe. But we also have to get some good football players to play good football as well.” How can further expenditure possibly be justified? Garde has imprinted no discernible identity on this Villa side, so why would he be trusted with further funds?

The common claim is that relegation can help a club. The idea is that dropping to the second tier would send a shockwave through the club. For Villa, Lerner would finally sell, players on big wages would find other suitors, and promotion would be guaranteed within a couple of years, if it even takes that long. It’s a common misconception; rarely does it ever work. Over the past five seasons – excluding the bottom three of last year – 10 of the 15 relegated clubs still reside in the Championship. Two, West Ham and Norwich, have returned to the top flight, but the same number have dropped further into League One. Portsmouth, relegated in 2010 and fourth in England’s fourth tier, provide a troubling outlier. To expect Villa to emulate Southampton or Leicester is foolish; mirroring a Leeds or Wigan implosion is just as likely.

Yet relegation is a certainty. Considering the owner’s intentions, a reckless transfer policy, and the club’s worrying lack of identity, it remains the only guarantee in their future.