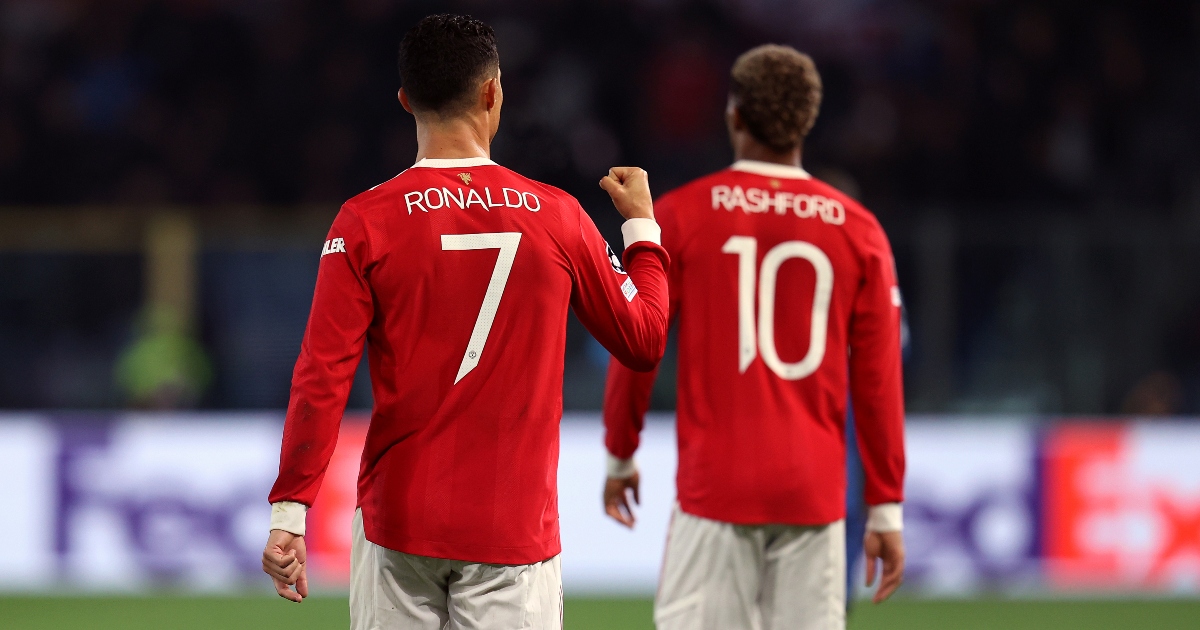 Cristiano Ronaldo was the hero of the night once again as Manchester United twice came from behind to draw 2-2 away to Atalanta on Tuesday evening.

Having wrapped up comeback wins against Villarreal and the Italians at Old Trafford, the 36-year-old rose to the occasion in Bergamo as he saved under-fire Ole Gunnar Solskjaer’s side from defeat.

Ronaldo had already levelled once at the Gewiss Stadium, where Josip Ilicic’s strike went underneath David De Gea at the start of a first half that ended with the forward firing home from Bruno Fernandes’ exceptional backheel.

Duvan Zapata looked to have sealed Atalanta victory when his strike was awarded after an interminable VAR review, but United’s star scored at the death to seal a 2-2 draw.

The late goal saved the blushes of his team-mates after a poor, error-ridden display – hardly the response Solskjaer wanted to the 3-0 win at Tottenham, especially with Manchester City coming to Old Trafford.

But, like so many times before, United found a way to fight back and stay top of Group F heading into the final two fixtures.

Solskjaer stuck with the three-man defence that secured a rare shutout at Spurs and his team began brightly, with Scott McTominay seeing an early snapshot deflect off Jose Luis Palomino and onto the post.

But Atalanta are unflinching against star names and quickly settled, breaking the deadlock after just 12 minutes.

Zapata kept his cool after being put through by Remo Freuler and crossed for Ilicic to hit a low, first-time strike that squirmed underneath De Gea. The goal was ratified after a VAR check.

It was an all too familiar setback for United, although they have shown their ability to hit back time and time again under Solskjaer.

Luke Shaw struck a shot into the ground that looped just over before Ronaldo failed to get a telling touch on a Paul Pogba cross, but Atalanta could have soon doubled their advantage.

Zapata went close from an acute angle but had the striker looked up he would have seen an open team-mate as Aaron Wan-Bissaka had not tracked his man.

Ponderous Pogba was breathing a sigh of relief when impressive Eric Bailly flew out to block a close-range Zapata shot that came after Teun Koopmeiners tackled the Frenchman on the edge of his own box.

The Atalanta striker claimed handball but the VAR was happy for play to continue after a review, with another penalty claim soon falling on deaf ears.

United returned to a back four after Raphael Varane limped off, with Solskjaer turning to Mason Greenwood.

The forward was involved in the visitors’ sensational leveller in first-half stoppage time, playing in Fernandes to produce an inspired backheel for Ronaldo to lash home.

The Portuguese players nearly swapped roles three minutes into the second half when Ronaldo played Fernandes in to get away a shot blocked by Palomino.

Greenwood struck a post after narrowly straying offside, before the assistant referee’s flag cut short Zapata’s celebrations after he all too easily skipped a Harry Maguire challenge and turned past De Gea.

But referee Slavko Vincic indicated the VAR was checking whether the striker had strayed offside when meeting Palomino’s pass, with tension turning to elation as the offside call was overturned after a lengthy review.

Fernandes’ cross-shot was saved at the near post before Nemanja Matic – surprisingly brought on for Pogba rather than the booked McTominay – saw a shot blocked as United pushed for another equaliser.

Zapata headed just over and substitute Luis Muriel saw a low drive stopped as Atalanta looked to put the game to bed, with De Gea forced low to his right to stop the former scoring from distance.

It looked to be heading one way until Ronaldo broke locals’ hearts in stoppage time.

Greenwood got a touch over to the forward on the edge of the box to hit a right-footed volley beyond Juan Musso to send the corner of United fans into raptures.

It may have been even better had the Atalanta goalkeeper not denied Donny van de Beek soon after.