Home F365 Says In defence of the Atalanta-loving football hipsters… 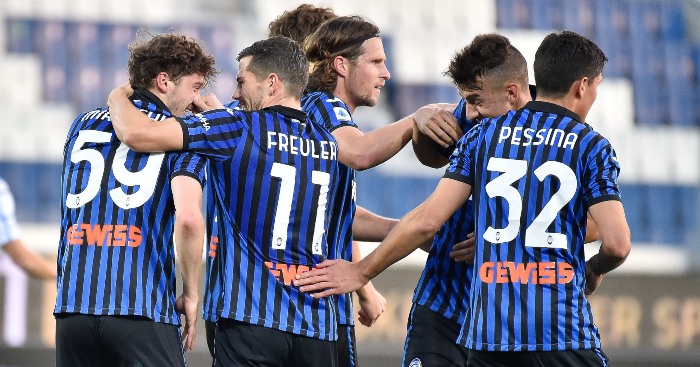 Competing with Italy’s big clubs? Tick. Playing exciting, aggressive football? Tick. Making waves in Europe? A full house. Rather a lot of people have been talking about Atalanta.

Until this month’s 5-0 thrashing at the hands of Liverpool, the Bergamo club were Twitter’s golden boys. My timeline was filled with praise for the Nerazzurri, with accolades heaped on their manager, their attacking approach, their kit. Following the defeat, the commentary switched. Suddenly this Atalanta side was filled with pretenders for whom the eulogising was unjustified.

The hipster footy nerds will be crying into their IPA tonight as they analyse Atalanta’s XG and pressing stats.

Have always said atalanta are a shite hipster team 👍

And so many more.

Although @NinjaSkrtl and @Hydeinho are your average Twitter pundits, united only in the disparity between their strength of conviction in their beliefs and their lack of qualification on the matter, they do seem to have a point: in recent years Atalanta have managed to carve out a niche as the team to support amongst football’s surgent ‘hipster’ population.

So, who are these ‘hipster’ football fans, and what is it about Atalanta that has attracted their attention?

Critics would say this category of fans are pretenders, people who prioritise information over emotion, using obscure stats and facts rather than feeling to justify their love of the game. People who, pint in hand and armed with all the information that five-minute highlights and a cursory skim through Wikipedia can provide, will bore you to death at the pub about an emerging teenage talent in the Serbian SuperLiga. All the while forgetting the result of the team they actually claim to support.

These ‘hipsters’ are trying to make football edgy, according to the cynics, and their love for previously inconspicuous teams like Atalanta is a contrived attempt to be considered interesting; more interesting than the boring bastards that only have the capacity to follow one club, for sure.

That’s what the critics would say. I wouldn’t.

Supporting a foreign club makes keeping up with European football more exciting, and excitement is exactly what Atalanta provides.

Playing under Gian Piero Gasperini in a fluid 3-4-1-2, Atalanta are all about attack. They scored 98 goals in last year’s Serie A, a tally that would crown them the division’s top scorers, with 22 more goals than champions Juventus.

Gasperini is obsessed with width, and this fixation means his Atalanta side’s style of play is marked by its individuality. Their midfielders and wing-backs isolate full-backs, create overloads, and get balls into the box in a way that is rarely seen in modern football.

Intensifying Atalanta’s appeal is their overachiever/underdog identity. Based in a city just 35 kilometres north of Milan that holds two of Italy’s most revered footballing institutions, La Dea don’t have the financial resources of a big club but she’s happy to go toe to toe with anyone put in front of her.

Nowhere was this truer than in last season’s Champions League. The only Italian team to reach the quarter-final stages, Atalanta’s unflinching attacking approach took Europe by storm, winning them much praise on the way. So why shouldn’t people have a soft spot for Atalanta?

Serie A has always had an allure for a particular type of football fan. Beautiful stadia filled with beautiful people wearing beautiful shirts – and with regular highlights on TV – meant that Italian football was the perfect obsession for the Fever Pitch generation of the late 90s and early 2000s.

Its stock dropped, however, in the noughties and teenies as the football became morose and stale, and Serie A clubs were unable to cope with the rise of other European super-clubs. But, with Cristiano Ronaldo’s move to Juventus and a host of Premier League players heading to Italian clubs, the eyes of British football fans are once again focused on Italy, and Atalanta just so happens to be in right now.

Football is, above all, an escape, and how people choose their particular type of escapism is up to them. The sheer volume of football on TV – combined with the rise of the illegal stream – means that, more than ever, people are able to genuinely follow multiple leagues from across the world. And that really is okay.

I asked my friend, Rob, a self-proclaimed football hipster and recent Atalanta fan what it was that he liked so much about them. “Dunno,” was his response. “Cool kit, cool manager, cool football.”

Fair play. Seems like as good a reason as any.