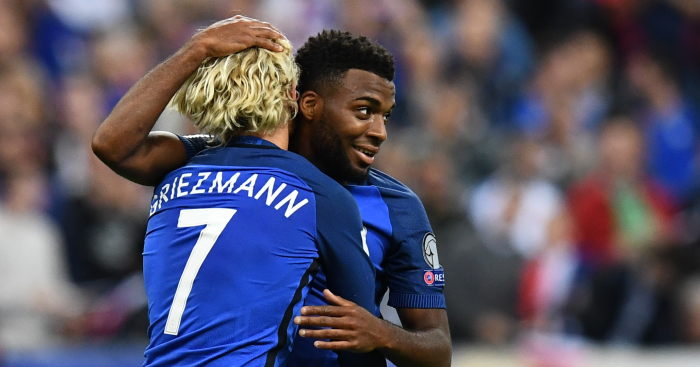 The club announced the deal to sign Lemar and the extended contracts for Griezmann and Hernandez after visiting the France training base at the World Cup.

Atletico were given special permission to visit France’s training base by manager Didier Deschamps just two days after his team opened their World Cup campaign with a winning start against Australia.

Griezmann has signed a contract extension to keep him at the club until 2023 and Hernandez will stay at the Wanda Metropolitano until 2024.

Griezmann, who scored in that 2-1 victory, said recently that he intended to remain at Atletico – having been heavily linked with a 100million euros (£88million) move to Barcelona in recent months.

The 27-year-old revealed he would be staying put during a Spanish television documentary called ‘The Decision’ aired on Thursday evening and he has now signed a new contract, along with Hernandez.

The good news kept coming for Atletico boss Diego Simeone as an agreement to sign Lemar was also announced via the club’s Twitter account on Monday night.

Lemar was tipped to head to the Premier League this summer, with Liverpool and Arsenal having shown an interest in the winger during previous transfer windows.

However, the 22-year-old looks set to join the Europa League winners in a deal reportedly worth £62.2million, pending a medical and finalising a formal agreement with Monaco.