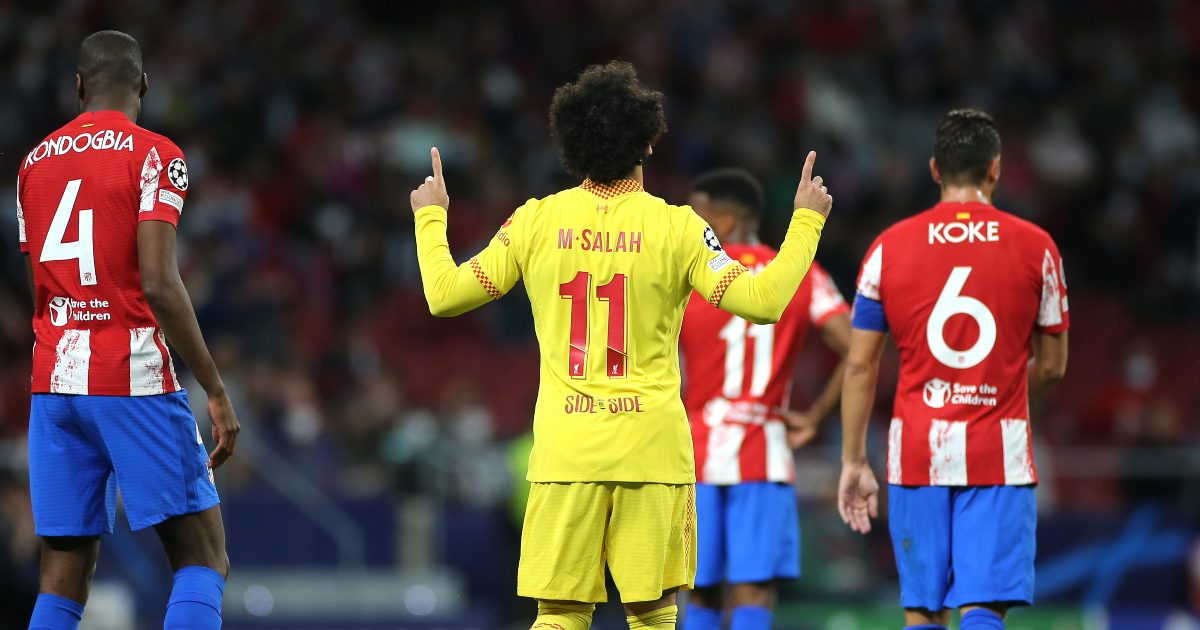 Mohamed Salah’s 78th minute penalty proved to be the winner as Liverpool edged past 10-man Atletico Madrid in a thrilling Champions League tie.

Salah became Liverpool’s first-ever player to score in nine consecutive games as he netted his side’s first and third in a brilliant game against Atletico Madrid.

Before Liverpool’s third, Naby Keita fired them into a 2-0 lead. But Atletico Madrid hit back before the break as Antoine Griezmann netted a brace.

Salah thought he had had the final decisive say, slotting a penalty at the same end he did when Liverpool won their sixth European Cup in 2019 but that honour, in fact, went to referee Daniel Siebert who rescinded a late Atletico penalty award after consulting the pitchside monitor.

When the dust finally settled Liverpool had nine points from their first three matches and a five-point lead at the top of Group B with the chance to secure qualification at Anfield in a fortnight’s time against the Spaniards.

Pre-match, Jurgen Klopp admitted he did not like Diego Simeone’s style of play but when he made those comments he could not have been expecting what was to transpire in Madrid.

His side enjoyed a brilliant start through Salah’s record-breaking goal, cutting in from the right and skipping past three opponents with ease before firing in a shot which deflected off Geoffrey Kondogbia to take it past Jan Oblak.

Keita’s 13th-minute volley from the edge of the penalty area put Liverpool into a position even they could not have anticipated against the famed Atleti resilience.

But despite the advantage and dominance of possession they still did not have full control of the game – and this was not the dogged, defensive home side which is their stereotype.

And, as Klopp also noted on Monday, Atleti “eat you up” if you are not at your best and Simeone’s team feasted on some poor defending in the 30 minutes to half-time.

Griezmann halved the deficit with a poachers’ deflection from Koke’s low shot following a corner, but the way in which Thomas Lemar had skipped past Keita on the touchline would have infuriated Klopp.

While the Guinea international brings more attacking thrust to midfield, his defensive discipline still leaves something to be desired and he was found wanting again for Atletico’s second goal.

But before that, Griezmann raced clear only to be denied by Alisson Becker, who was also to stop efforts from Joao Felix and Lemar before the break.

The Brazil goalkeeper, back in the side having missed Saturday’s win at Watford as he was completing his quarantine in Spain after returning there from international duty, could not keep out the France striker a second time though.

Joao Felix skipped past Keita far too easily in the 34th minute and rolled a pass into his strike partner who took one touch before slotting the ball home.

Even the usually unflappable Liverpool goalkeeper seemed to be affected by the chaos, racing out only to smash the ball into Joel Matip and fortunate to see it rebound to him with Griezmann lurking behind him ready to roll it into an empty net.

The predictable half-time change saw Keita replaced by Fabinho as Klopp tried to regain control but the open nature of the game continued with Sadio Mane’s header clawed away by Oblak before Alisson dived at the feet of Yannick Carrasco.

As if the proceedings were not manic enough, Griezmann was dismissed for the first time in his career for accidentally kicking Roberto Firmino in the head with a high challenge for the ball.

But if Liverpool thought that would push their hosts back into their shell they were wrong as they counter-attacked with almost as much frequency with 10 as they did at full strength.

They did, however, ramp up the gamesmanship backed by a partisan crowd and an animated Simeone, and Klopp had to replace the already-booked James Milner with Alex Oxlade-Chamberlain to prevent their numbers being reduced.

In a game which had virtually everything, a penalty was almost inevitable and 14 minutes from time Mario Hermoso completely took out Diogo Jota – on for Mane – allowing Salah to slot home as Liverpool scored three for the seventh-successive away match this season.

Still the drama continued as Jota tangled with Jose Maria Gimenez only for Siebert to subsequently reverse his penalty decision, while Klopp was annoyed by Simeone racing down the tunnel at the final whistle without a handshake.