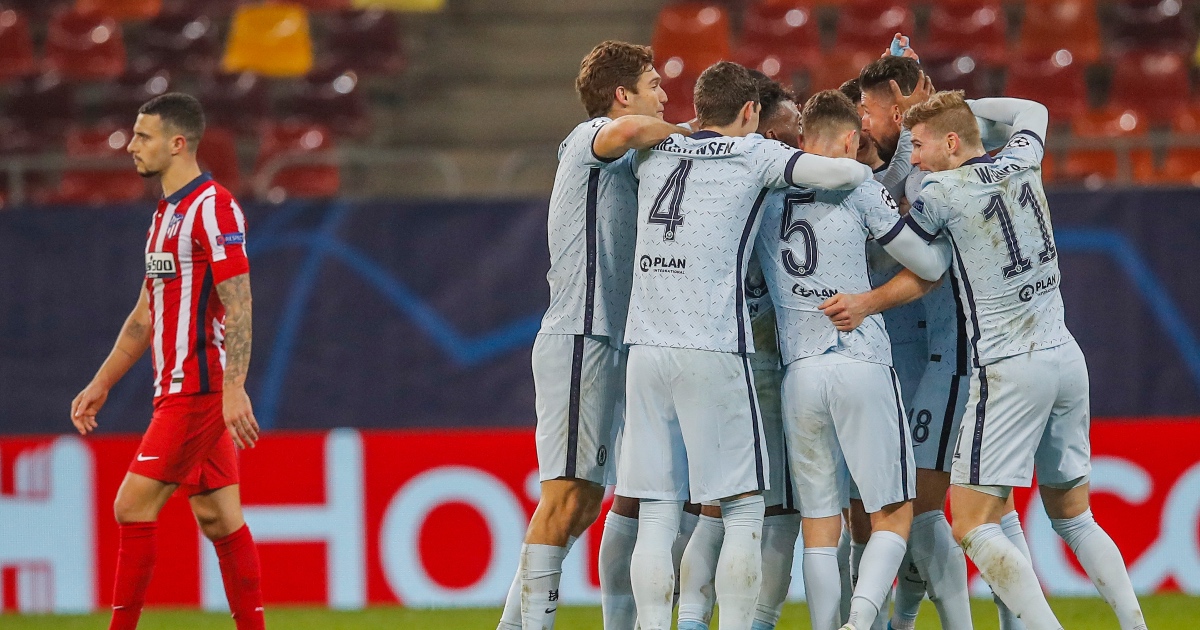 Olivier Giroud produced another Champions League special to hand Chelsea the advantage in their last-16 tie with Atletico Madrid after a 1-0 first-leg win in Bucharest.

The Blues forward grabbed his sixth goal in the competition this season with an overhead kick in the 68th minute but it was only awarded after a lengthy VAR review.

It was thoroughly deserved for Thomas Tuchel’s side, who dominated for large parts and extended their unbeaten run under the German to eight games since his arrival on January 26.

A negative was bookings for Mason Mount and Jorginho, which rules them out of the second leg, but Atletico boss Diego Simeone knows his team will need to score at least twice next month to go through in normal time.

Callum Hudson-Odoi was a surprise name in the Blues starting line-up for this tie hosted in Romania due to coronavirus travel restrictions enforced by the Spanish government.

The England international had lasted only 31 minutes following his half-time introduction at Southampton on Saturday, but manager Tuchel played the youngster at right wing-back.

Chelsea’s night started on a poor note when inside 60 seconds Mount was booked for a foul on Joao Felix, meaning he will be suspended for the second leg at Stamford Bridge next month.

Edouard Mendy almost contrived to pile more misery on the visitors after a heavy touch in the penalty area but Saul was unable to make the most of the goalkeeper’s mistake.

After early pressure from Atletico, including a dangerous Luis Suarez centre across the face of goal, the Premier League side started to dominate possession and a long-range effort from Marcos Alonso represented the first shot on target from either side.

It was routine for Atletico goalkeeper Jan Oblak, who had gone seven matches without a clean sheet. He was forced into more strenuous action six minutes before the break as Timo Werner’s strike was well saved.

Goalless at the interval, Simeone would have been the happier of the two managers with numerous absentees including England full-back Kieran Trippier due to suspension.

Not long after Suarez saw an effort deflected wide by Andreas Christensen, Joao Felix fired an overhead kick off target following Cesar Azpilicueta’s poor headed clearance. It was a sign Atleti were set to be more adventurous in this half.

Jorginho became the second Chelsea player to be ruled out of the second leg in the 64th minute when he brought down Felix, but four minutes later the away side were able to break the deadlock in style.

Alonso got forward well and his cross was deflected into the path of Giroud, who produced a superb overhead kick from 12 yards which beat Oblak and found the bottom corner.

It was immediately ruled out for offside, with Mount deemed to have knocked the ball forward for his team-mate, but after a lengthy VAR review it was adjudged Atletico centre-back Mario Hermoso had got the decisive final touch.

Giroud’s 11th goal of the season and sixth in this competition gave Chelsea a crucial away goal in the tie and Tuchel reacted instantly with the introduction of N’Golo Kante and Hakim Ziyech.

Reece James followed them on to the pitch soon after, with Hudson-Odoi taken off after 80 minutes on this occasion.

While Atletico pushed for an equaliser, Simeone made the surprise decision to take off Felix and they suffered a second consecutive defeat.

It gives Chelsea the upper hand ahead of the return leg on March 17, where the Blues will aim to make the quarter-finals for the first time in seven years.