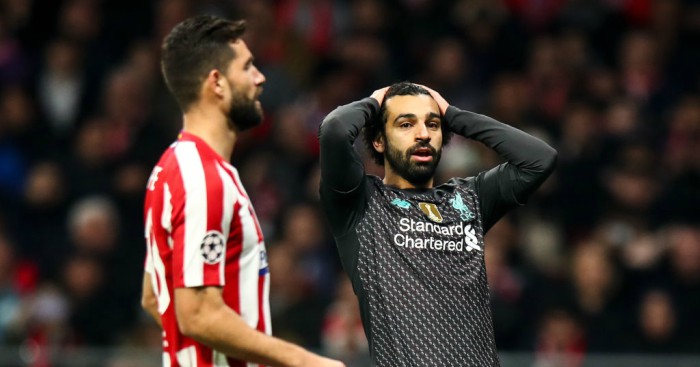 The laugh when Jurgen Klopp was told that Atletico Madrid had not lost a single Champions League knock-out tie at home under Diego Simeone betrayed two things: a) that really was the last thing he wanted to learn in the final minutes before a match and b) he would have happily taken a draw without playing 90 bruising minutes. “Thank God we play at Anfield too,” he said. And that was before Liverpool’s lack of quality and Atletico’s discipline combined to leave the reigning champions in the bizarre position of barely even threatening to score a goal.

Sometimes teams can score too early; you know Arsenal are not going to hold onto a lead for 86 minutes against elite opposition. But it is never too early for Atletico, who scored after four minutes and then relished the opportunity to defend not just for 86 minutes but 176 minutes plus stoppages. They are almost halfway to their destination and Liverpool will have to be so very much better, so much more innovative, in the second half of this tie.

They started sloppily in the one game they absolutely could not afford to start sloppily, gifting Atletico one goal and then wrapping another only to leave it in the taxi. In the end, leaving Madrid with just a one-goal deficit might still make them narrow favourites to progress, given their form at Anfield. But the manner of the defeat should worry Klopp, who watched his side fail to muster a single shot on target from 73% possession. The delivery was poor, the movement was slow and the tactics were predictable.

They had been warned. In a far-reaching interview with the Guardian, Saul explained that Atletico knew how to beat Liverpool. He did not predict a bounce off Fabinho and a goal scored by one of only four attackers among nine Reds players defending a corner, but he did explain that Liverpool “find it hardest when you’re deep because they’re very, very, very good in transition”. Armed with their lead, they sat deep and Liverpool did indeed find it very hard, largely pumping long balls towards the heads of forward players with no space to run in behind.

Atletico were more than happy to allow Liverpool’s defenders the ball, their back four all logging over 100 touches. That they all reached double figures for long balls – with Trent Alexander-Arnold also attempting a staggering 17 crosses – is a succinct way of saying that there was far too little pace and invention from Liverpool. Perhaps Sam Allardyce was right after all.

“It’s the way they play,” said the uncharacteristically poor Virgil van Dijk after the game. He claimed that Liverpool “handled it pretty well” but nobody watching that game would have concluded that Liverpool thrived under those conditions. They were rattled and then they utterly failed to rattle the opposition despite dominating the ball. The only real positives to take from the night were that they only lost 1-0 and it is only half-time.

There will be those who mutter about dark arts and those who somehow blame the referee, but Liverpool knew the challenge awaiting them in Madrid and they failed that challenge. They knew they were facing a side that would match them for intensity and a manager who would match theirs for passion. Now they must show that they have ingenuity to match their intensity.