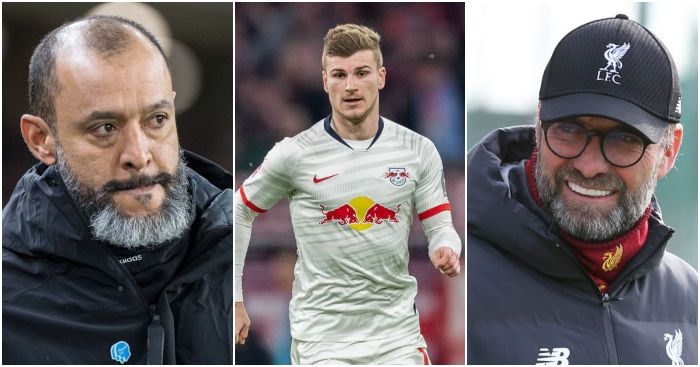 Game to watch – Atletico Madrid v Liverpool
There was a theme in the words Jurgen Klopp used to describe the Champions League last-16 draw Liverpool were handed in December. The German admitted it was “a tough one”, accepted it would be “a difficult game” and acknowledged the “intensity” both sides would seek to weaponise.

Atletico Madrid felt like the least ideal opponents for Liverpool. Their five potential rivals all promised different routes to the same destination: Real Madrid offered revenge, Atalanta intrigue, Dortmund emotion and Lyon comfort. But Atletico would scrap and battle until the end.

He would be a fool to expect much different on Tuesday. Atletico have lost one of their last 20 home Champions League games, and only one of 19 European knockout legs at either the Vicente Calderon or Wanda Metropolitano in nine years under Diego Simeone. That February 2013 Europa League defeat to Rubin Kazan is the exception to a rule of making guests feel uncomfortable and isolated.

But they are not the force they once were. Fourth in La Liga and 13 points behind Real Madrid, Atletico have won fewer than half of their games and finished firmly behind Juventus in their group. While only Real have conceded fewer in Spain’s top flight, they are the joint-lowest scorers left in the Champions League.

Atletico and Liverpool felt like kindred spirits not long ago, two sides carved and cast in their manager’s image as combative challengers to an established elite, both tactically distinctive and occupying seats at the top table that could have been pulled from them at any moment. Liverpool have swapped theirs for a throne while Atletico’s is buckling under the weight of unfulfilled expectation.

Only one can profess to still be a true underdog; Liverpool outgrew that status long ago. And, in truth, that will suit both sides. The reigning champions could not be more at ease dominating if they donned latex and assigned a safe word, while Atletico are at their most dangerous when underestimated.

Player to watch – Timo Werner
England has often collectively struggled to estimate the value and quality of players who reside outside of our little island. Lionel Messi is six Ballons d’Or and almost 700 goals deep into a generational, sport-defining career yet some still question his physicality, wonder where he would fit in or, until recently, dismissively scrutinise his record against Premier League teams.

Timo Werner will soon face that level of inspection. The 23-year-old’s development is approaching a magnificent crescendo at Leipzig, where he is in the midst of his best scoring season ever by mid-February. But he is goalless in his last five appearances against Bayern Munich, and fine performances against Borussias Dortmund and Monchengladbach will only assuage doubts for so long.

Tottenham have endured their own problems but present a genuine opportunity to end an argument before it even begins. How Werner fares will be viewed through the prism of interest from Liverpool and Chelsea, as well as the needs of Manchester United and Tottenham themselves to sign an elite centre-forward.

If his first game against an English side produces a display of genuine excellence, that asterisk can be removed. If he struggles to express himself and live up to a well-cultivated reputation, that semblance of doubt lingers. The question is not of ability but suitability; the answer could be offered as early as Wednesday.

Manager to watch – Nuno Espirito Santo
Few would argue that Wolves have not earned their first European knockout tie in almost four decades. A season that started in July will finally start bearing low-reaching fruit for the Premier League’s highest-placed Europa League side when Espanyol visit on Thursday.

This is not the same team that inflicted upon Atletico one of the heaviest defeats of Diego Simeone’s reign en-route to finishing seventh last season. Head coach Rubi left for Real Betis in the summer, with David Gallego, Pablo Machin and now Abelardo trying and failing to replace him.

Espanyol are thus bottom of La Liga, with the worst defensive record and third-weakest attack. This, theoretically, is a significant mismatch.

But for Nuno, it will be a welcome test. While the 46-year-old has achieved incredible things in the west Midlands, his European pedigree requires refinement.

His first season in continental competition would have been for Rio Ave after taking them to Europa League qualification in May 2014, but his departure for a troubled Valencia side meant the 2015/16 Champions League was his first chance; he was sacked before the final game of a group stage at which they exited.

Nuno righted those wrongs by progressing past Leicester to the last 16 with Porto in 2016/17, but final-bound Juventus won both legs without conceding.

So this is an opportunity not only for Wolves to make a statement, but their manager, too. A run of one win in seven Premier League games must be punctuated by a grand arrival on the Europa League stage.

Team to watch – Manchester United
There is something quaint about a team either winning or losing six of their last 14 games by a scoreline of 2-0. It rather neatly encapsulates a Manchester United side that flits between meek acceptance of mediocrity and apparent control with no middle ground.

Take the win over Chelsea. United were excellent in restricting their opponent and capitalising on their own moments of superiority but one instance of the officials properly upholding whichever law it is that prohibits you from kicking other people in the testicles might have brought the entire house of cards crashing down.

That same fortune would be welcome against Club Brugge, if only to ease two pressure points. Watford visit three days after the first leg with a view to repeating their win at Vicarage Road in December, while a trip to Goodison Park awaits in the aftermath of the second.

Ole Gunnar Solskjaer must therefore strike a balance he could not find last season. United’s form started to wobble around the time of their last-16 Champions League tie with PSG in February and March, collapsing completely in between games against Barcelona in the quarter-finals. They cannot afford to stumble in either competition this time.

Football League game to watch – Macclesfield v Plymouth
While the demise of Bury and subsequent halving of League Two’s relegation places may yet spare Macclesfield, Mark Kennedy will know not to take anything for granted. The former Liverpool and Manchester City left-back was appointed head coach at Moss Rose in January, winning just one and losing four of his seven games since.

Some choose an easier assignment for their first post in management. Kennedy instead stepped into a side struggling to pay wages and even fulfil fixtures, replacing Daryl McMahon who, in turn, had succeeded Sol Campbell in August.

Stevenage are seven points below, standing directly on the fourth tier’s only trapdoor to non-league. Their first of five consecutive defeats in just over three weeks came against a Plymouth side hoping to escape the division through a more conventional exit.

It just so happens that their current manager was Bury’s last in a professional fixture. Ryan Lowe guided the club to promotion in 2019 but left a matter of months before their expulsion from the Football League.

He is now hoping the first part of that particular piece of history repeats itself. His Plymouth side are fourth, three points behind current leaders Swindon with a game in hand. That comes against Macclesfield on Tuesday in a game with ramifications at either end of the table.

European game to watch – Dortmund v PSG
The intriguing aspect of this Champions League draw is that it has produced matches with a fresh feel to counter the sense of a competition growing increasingly stale. The same teams measuring monetarily-enhanced appendages every 12 months appeals to few but those who govern the game.

Atalanta versus Valencia, Tottenham versus Leipzig and Napoli versus Barcelona are all unique meetings in a competitive setting. Dortmund and PSG have, somewhat unfathomably, only played one another twice before.

Both have changed immeasurably since those Europa League group-stage games in 2010. Dortmund won their first of two successive Bundesliga titles that season and flew close enough to Champions League glory to have their wings singed off soon after. They remain a force, although to what degree it has become difficult to decipher.

PSG, meanwhile, were bought out by the absolute State of Qatar at the end of that campaign and have pursued world domination since. Domestic glory will only sate that appetite for so long; it is a European crown they long for.

It is Kylian Mbappe v Erling Braut Haaland, Thomas Tuchel’s return to the Westfalenstadion and a sort of stylistic clash for the ages: everyone’s favourite second club against a team only their guardians can truly love. It should, at least, be fun.