Home All The News Atletico take steps to claim £71.7m more for Griezmann 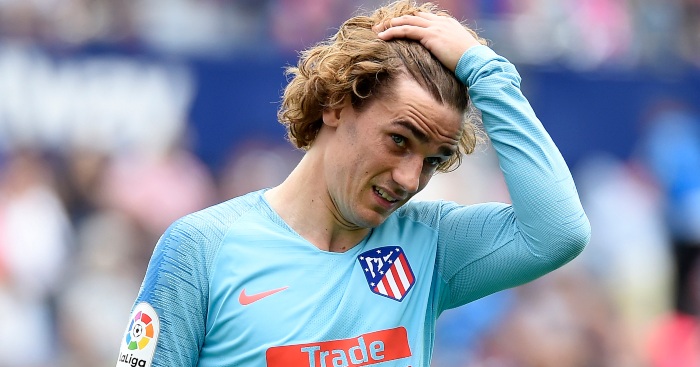 LaLiga champions Barca have announced the signing of France forward Griezmann on a five-year contract until June 2024.

However, Atletico have “initiated procedures” with a view to receiving a higher fee because they believe the transfer was agreed before the 28-year-old’s buyout clause was reduced from 200m euros (£179.3m) on July 1.

World Cup winner Griezmann announced on May 14 he would be leaving Atletico after spending five seasons in the Spanish capital.

“Atletico Madrid consider that the deposited amount is insufficient to cover his buyout clause since it is obvious the agreement between the player and Barcelona was closed before the clause was reduced from 200 million euros to 120 million euros,” read a statement on Atletico’s website.

“It was also prior to the date on which the clause was modified that the player on May 14 announced his disassociation from the club.

“Atletico Madrid believe the termination of the contract happened before the end of last season due to facts, deeds and actions by the player, and therefore have already initiated the procedures deemed appropriate to protect our rights and lawful interests.”

Earlier this month, Atletico claimed Barcelona and Griezmann had reached a transfer agreement in March and accused them of disrespect.

His Barcelona contract, which will be officially signed on Sunday ahead of his unveiling, contains a buyout clause of 800m euros (£733m).

Griezmann was reported to have turned down a transfer to the Nou Camp last summer because he did not like the thought of being “Lionel Messi’s lieutenant”.

✌️ Life is all about second chances. pic.twitter.com/5ArFiaP2ht

He appeared to reference that failed move in a video posted on Barcelona’s website, while also vowing to “defend the colours” of the Catalan club.

“When I was a boy, my dad taught me that trains don’t come around just once,” said Griezmann.

“Now it’s time to take on the challenge of a new destination. Finally, our paths cross.

“I’ll defend the Barca colours with all my determination and commitment. It’s our time. This is our path.”

“With his arrival at Barcelona, the Frenchman takes another step forward in his career with the goal of consolidating his place as one of the best players in the world,” read a statement on the club website.

Griezmann, who has won 72 caps for his country, moved to Atletico from Real Sociedad in 2014 and helped the club win the Europa League in 2018, scoring twice in the final against Marseille.

He joined Real Sociedad at the age of 14, making his senior debut four years later.

As well as his World Cup success in Russia last summer, he is also a Champions League and European Championship runner-up after Atletico and France fell at the final hurdle in those respective competitions in 2016.