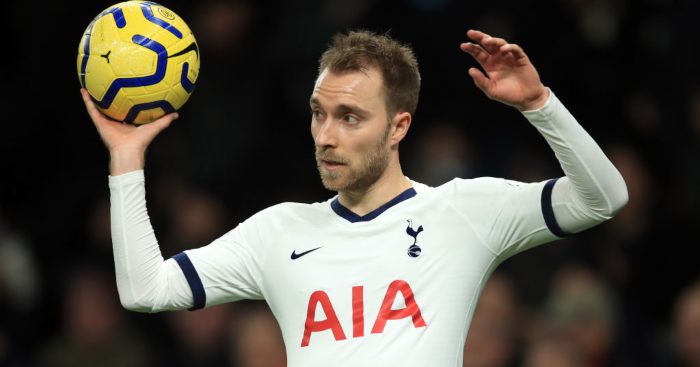 Inter Milan came from behind to beat AC Milan 4-2 and Christian Eriksen hailed the atmosphere as unlike anything he has experienced in the Premier League.

The Denmark star saw an incredible long range free-kick hit the woodwork as Inter recovered from 2-0 down to record a famous win in the white-hot atmosphere of his first Milanese derby.

Eriksen told Danish broadcaster TV2: “I’m going to have nightmares because I was going to score. I knew I had to stay close to the ball and see if we had to apply some of the patterns we tried in training.

“But then I saw Milan so far back and I thought I’d take the opportunity, I looked at Marcelo Brozovic, he told me to kick and I kicked. What would have happened if it had gone in? It would have been ecstasy in ecstasy, the icing on the cake.

“It was a great experience after a bad first half. I’m smiling at the fact that I got a win.”

The former Tottenham star also spoke about the intense atmosphere with 75,000 present at the San Siro.

“The first half was sad, but winning like that with a comeback was very, very special. Now I can leave the stadium with a huge smile on my face.

“The fans had prepared this huge choreography that took up the entire end of the stadium. You don’t get that atmosphere in the Premier League, partly because they’re not allowed to.

“Here, you really feel the fans pushing you on from the moment you arrive in the team bus. They are slapping their hands on the side of the vehicle, you feel their passion and understand how important this match is.”

Eriksen, who joined inter from Spurs last month in a deal worth €20 million, was also asked about the title race with rivals Juventus.

“The Scudetto”? It’s nice to have the same points as Juve, but there are still too many games to go before the end,” Eriksen added.