Home Arsenal Aubameyang and Arsenal: We’re looking for the catch 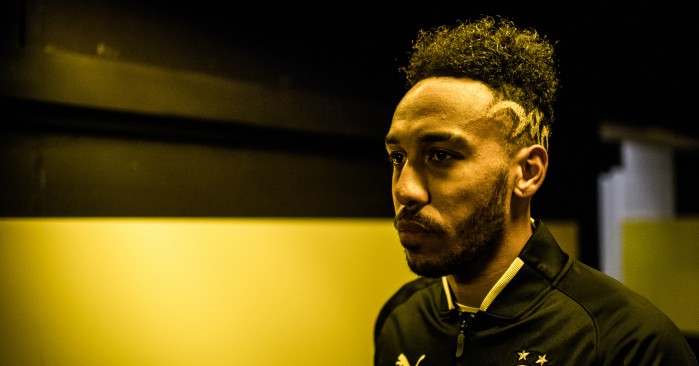 In December 2016, The Guardian consulted 124 experts from 45 nations and compiled a list of the 100 best male footballers on the planet. Pierre-Emerick Aubameyang was in eighth, one place ahead of the highest-ranked Premier League player: Alexis Sanchez. He would end that calendar year with 23 league goals, which made him more prolific than both Harry Kane and Diego Costa.

In December 2017, The Guardian consulted 169 experts from 63 nations and compiled a list of the 100 best male footballers on the planet. Pierre-Emerick Aubameyang was in 21st, now below five Premier League players but ahead of Mo Salah, Philippe Coutinho, Christian Eriksen, Paul Pogba, Dele Alli and Sanchez. He would end that calendar year with 28 league goals, which made him more prolific than Luis Suarez, Romelu Lukaku, Kylian Mbappe and just about every other footballer in Europe.

Take the name of Pierre-Emerick Aubameyang out of those two paragraphs and we have described a player that should be coveted by just about every elite club in Europe, regardless of him edging towards 29 this summer. That he now appears to be on the verge of joining Arsenal – in the Europa League, 23 points behind leaders Manchester City and eight behind a top-four space – should be seen as a spectacular coup. And yet, everybody is looking for the catch. Is he a bad boy? Is he using Arsenal? Is his pace going to run out next year?

There is a cynicism about every signing made by Arsenal – born of several years of near-disasters – but this really should be the exception, if only because Arsene Wenger is reported to have reservations. If Wenger has reservations, the chances are that this signing (championed by Sven Mislintat, rather than Wenger) will be a triumph. Mislintat has seemingly allayed fears about his attitude, which was seemingly impeccable before this season, with even Dortmund sporting director Michael Zorc saying: “He hasn’t behaved like this for years, he’s always been very professional.”

Tracing Aubameyang’s discontent does not require the services of a detective; clearly after three years of being a goal machine for Dortmund and winning nothing fancier than a German Cup, he believed he had earned a transfer to a bigger club. PSG were more than keen, but then new sporting directer Antero Henrique arrived and decided that £75m did not represent good value for a player without Galactico status; almost £200m for Neymar and the promise of £166m for Kylian Mbappe was seen as business more befitting of a super-club.

Then his former club AC Milan were interested but they too were put off by the price. “Dortmund struggled to allow him to leave and that is what happened,” said AC Milan sporting director Massimiliano Mirabelli. Unsurprisingly, Aubameyang then struggled to find the motivation to attend team meetings; he clearly felt like Dortmund had blocked his last chance of a big move. It probably did not help that he then had to watch his good friend Ousmane Dembele leave for Barcelona for a fee approaching £100m, largely because he is eight years younger and still in the bracket of ‘potential’. “I’m very happy for him,” said Aubameyang, but it must have hurt. Apparently it hurt enough for him to now consider Arsenal.

If PSG were initially willing to pay £75m six months ago, it would be churlish to suggest that paying £55m (or £35m and Olivier Giroud) represents poor value for a 28-year-old. Those who laud Manchester United for signing Sanchez for £35m (plus £20m signing-on fee, plus £10m agent fees) should note that the Chilean is six months older than Aubameyang and has played approximately 200 more games than the Gabon international, and at a far higher intensity. If anybody should be worried about the creep of age, it is probably not Auba.

Fast-forward to December 2018. Will we see Aubameyang once again above Sanchez in The Guardian’s list of 100 best male players? It’s not beyond the realms of possibility, which should be reason enough to hold the cynicism.