Home Mediawatch Aubameyang? The lazy sod should have scored three… 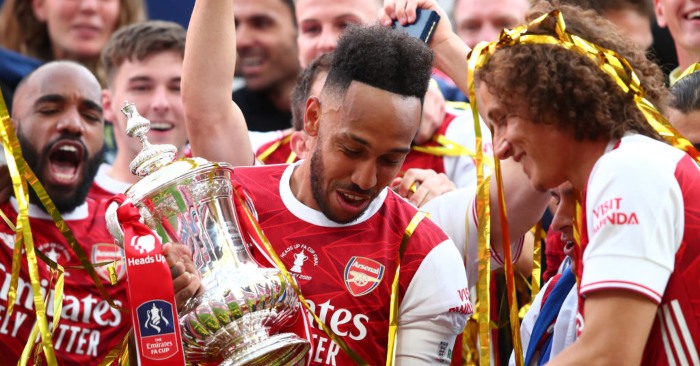 …on Sunday night, when it was first reported in Bild on Friday and pretty much everywhere else (eg. ‘Jadon Sancho transfer latest: How Manchester United flop Memphis Depay could help Red Devils sign £100m-rated Borussia Dortmund star’ – talkSPORT) in the days since.

Mediawatch remembers with fondness a time when claiming old news as an ‘EXCLUSIVE’ was pretty much the lowest anyone sunk. Now? It barely registers.

Missed deadline
We note, by the way, that Jadon Sancho did not join Manchester United on Friday as predicted.

Johnson’s Johnson
But it’s now Monday after the FA Cup final and everyone is talking Pierre-Emerick Aubameyang. So what’s the latest? Is there a chance that there is no latest? Not when there are clicks to be had, no…

Even for the Mirror, that is old news.

But what of the Aubameyang ‘latest’?

‘Arsenal beat Chelsea to win the FA Cup at the weekend – and their transfer hopes have been given a shot in the arm.

‘All eyes are on whether the Gunners can now keep hold of Pierre-Emerick Aubameyang after his heroics powered them into European football.’

And if we want to know the ‘latest’ about Pierre-Emerick Aubameyang, we always ask former Liverpool defender Glen Johnson.

The most ridiculous thing? The Daily Mirror have probably the best-connected Arsenal journalist in the country and he wrote a piece for Monday’s back page saying that ‘ARSENAL will this week offer Pierre-Emerick Aubameyang a £250,000-per-week, three-year deal to stay at the Emirates’.

Now that sounds like ‘Aubameyang latest’ to us. But what the f*** do we know? Less than Glen Johnson obviously.

Synergy
According to The Sun’s Arsenal transfer blog:

‘Gunners chiefs will this week offer their FA Cup final match-winner fresh terms — but he wants a three-year deal worth £250,000 a week.’

‘Barcelona have missed out on over £700m of income this season according to club president Josep Maria Bartomeu.’

And that, ladies and gentleman of Arsenal, is the bones of your ‘Coutinho update’.

Mushy PEA
We had to keep reminding ourselves that Arsenal actually won the FA Cup as we read Martin Samuel’s ‘report’ in the Daily Mail:

‘Time was, an FA Cup victory would have been the cherry on top for Arsenal, not the last desperate route into the lesser European competition.

‘This success is relative. It is brilliant for Mikel Arteta, a first trophy as manager, impressively earned, and a thorough vindication of his methods. It earns him the right to shape the club from here.

‘Yet the reason this counted as such a forward step for Arsenal is that they have spent so long travelling backwards in recent years. Further progress now depends on the events of this short summer, with keeping Pierre-Emerick Aubameyang surely top of the agenda, now he has re-engaged.’

Now we have been here before – when Samuel kicked Aubameyang a month ago for reasons unknown. Or at least unpublished.

‘The player who took the FA Cup away from Chelsea on Saturday – he could have had the first final hat-trick since Stan Mortensen of Blackpool in 1953 had he not missed a sitter in the third minute – could not have looked less interested when Project Restart began, away at Manchester City.’

A ‘sitter’? The Mail’s own live blog from the final described that chance thus: ‘The first chance has fallen to Arsenal! Ainsley Maitland-Niles did superbly to wriggle his way into a crossing position from a long punt forward, and his delivery was nodded wide by Pierre-Emerick Aubameyang.’ But we digress.

Seriously, if a man scores twice to win the FA Cup final and your first reaction is to say ‘he should have scored three’ and then ‘he was a bit sh*t in a game six weeks ago’, then the problem really is with you and not him.

‘He appeared to have his mind on a summer move, shielding his body in readiness for a switch to Real Madrid. In the first five games when football recommenced, Aubameyang’s only goals were against Norwich.’

He did take more shots against Brighton than in any other game this season (one Arsenal site rated him higher than any of his outfield teammates), so it kind of looked like he was trying, but carry on…

‘He didn’t even make the team when Arsenal played their quarter-final against Sheffield United. The two Wembley fixtures, however, have seen a revival.’

‘He didn’t even make the team’ for an FA Cup quarter-final that saw Mikel Arteta make five changes to his starting line-up, including the benching of his captain, who had played three sets of 90 minutes in just eight days.

‘Maybe it was the occasion, more cynically the attraction of the shop window.’

He also scored twice against Watford last week; he has scored six goals in his last four games. It’s almost like it took him a few weeks to get into the kind of stride that has seen him score literally more goals than any other player in English football since he signed for Arsenal.

‘There will no doubt be plenty around Aubameyang telling him he could do better, but whether that is true in the current economic climate – when even Saudi Arabian investment funds are tightening the reins – is another matter. Arsenal deserve assurances, too.

‘Retaining Aubameyang will be very expensive, and, if the club pays up, the player cannot feel he is doing them a favour, as seems to have happened with Mesut Ozil. He must be prepared to buy into Arteta’s methodology, into a project that aims to re-establish Arsenal as contenders.’

He has scored a ridiculous 70 goals in 109 games for a pretty average side. And you still want to suggest that he might have a bad attitude and a commitment problem? Yes, it’s definitely the professional sportsman with the issue here.

Yacht on earth
These headlines have all appeared on the football homepage of The Sun’s website in the past four weeks:

‘Cristiano Ronaldo relaxes on £30,000-a-week yacht with Georgina Rodriguez and pals ahead of Genoa clash’

It’s all about you…

Liverpool players will be sent off for breaking new FA coughing ruleshttps://t.co/dASESaGmt1

Michael Cox on how Arsenal won the FA Cup final