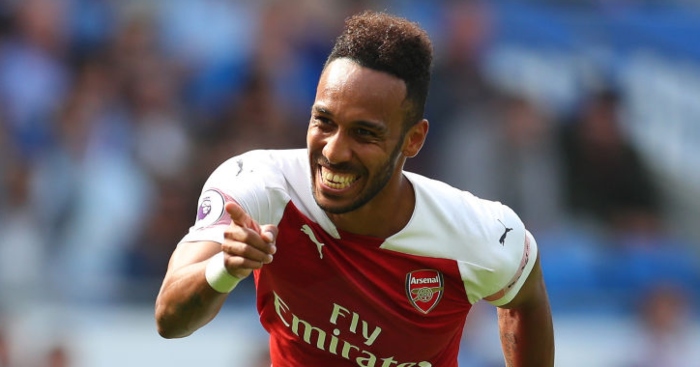 It’s an exclusive club with only Lionel Messi, Robert Lewandowski, Cristiano Ronaldo, Sergio Aguero and Luis Suarez as its other members. The criteria? Four consecutive 20-goal seasons in an elite league and the capacity for a fifth if football is ever played again. Pierre-Emerick Aubameyang is comfortably in that club and yet his name is never mentioned in the same breath as those other players. A consequence of never playing for a super-club? A consequence of never playing at a major tournament? Whatever the reason, when lists of great footballers or even great goalscorers are made, Aubameyang’s name is usually absent.

It was remarkable that he ever signed for Arsenal at all – as I wrote at the time, this ‘should be seen as a spectacular coup’ – and it is now remarkable that they should even consider selling him to a Premier League rival for £30m. A player whose record puts him in the same bracket as the world’s greatest attacking players should not be sold for such a paltry sum. A player whose Premier League minutes-per-goal record puts him behind only Aguero, Harry Kane and Thierry Henry should not be sold for such a paltry sum. Even with just a year left on his contract. Even at the age of 31.

The truth is that unless Arsenal really are in desperate financial straits, selling their most valuable asset for anything less than £50m would be false economy. They cannot replace those guaranteed goals for £30m, even for a season. And one season might be all that is needed to return to the Champions League and either attract a genuine replacement or persuade Aubameyang that his future could indeed lie in north London. Reports that he could decide that sooner should be greeted with red balloons and pink champagne. It makes not a great deal of sense that a goalscorer of his quality should be at Arsenal; it would make no sense at all to allow him to leave for a relative pittance.

Certainly, they should not sell him for anything less than a fortune if his suitors are in the Premier League. Arsenal have done that too often, with Robin van Persie the obvious parallel to this story – a captain sold to Manchester United to weaken Arsenal and boost their rivals’ title challenge. “Honestly, I would have preferred to have sold him overseas, to PSG for example, rather than Manchester United,” said Wenger. But the Frenchman and his project had a relationship that left Wenger feeling like he owed Van Persie the transfer that would deliver a Premier League winner’s medal. The current manager owes the current captain no such thing.

Should Barcelona offer a sizeable sum then neither player nor club could turn down that pay-day, but selling one of the most reliable goalscorers of the last decade to Chelsea for £30m would be nothing short of ridiculous. They spent more than that on Shkodran Mustafi, which tells you everything you need to know about whether Arsenal should choose to have even one more year of Aubameyang or the money to spend on transfers.