Home F365 Features Aubameyang next? The PL super subs who set the benchmark 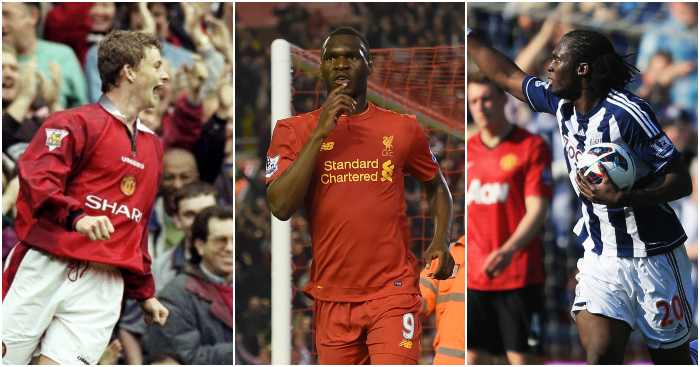 Arsenal striker Pierre-Emerick Aubameyang is on course to set the bar for goalscoring Premier League substitutes.

Aubameyang has scored four goals and assisted one in just 59 minutes as a substitute this season.

Such form is testament to both the strength of Arsenal’s attacking options, but also how Unai Emery is using them. “At times under Wenger it felt like substitutions were set to an alarm clock,” Martin Keown said last month. “Emery is more intuitive with his changes. Emery’s are coming off the bench hungry to prove why they should be starting.”

None have proven hungrier than Aubameyang. The Gabon international has already scored more goals as a substitute than the highest-scoring substitutes (all 3 goals) of the 1993/94 (Alex Mathie), 1994/95 (David Lowe and Jason Lee) and 1996/97 (Ole Gunnar Solskjaer) seasons.

He has also already matched the highest-scoring substitutes (4 goals) in:

With 26 games – and possibly many more appearances from the bench – to come, Aubameyang has the record for most goals as a substitute in a single Premier League season in his sight. But whose mark is he trying to pass?

Five goals as a substitute in one season

Graham Fenton (1995/96, Blackburn)
After making just three substitute appearances for Aston Villa from August to December, Graham Fenton had had enough. He joined reigning Premier League champions Blackburn before the turn of the year, trading a place behind Dwight Yorke and Savo Milosevic to warm benches while watching Alan Shearer and Chris Sutton dominate defences.

But Fenton was afforded opportunities at Ewood Park, with 11 of his 15 appearances coming from the bench. He scored six goals in the final nine games of the season, including two in the final five minutes of a win that ended Newcastle’s fading title hopes once and for all. He came on for Mike Newell when Rovers were 1-0 down after 71 minutes, and left Kevin Keegan presumably slumped over some advertising hoardings by the final whistle.

Ole Gunnar Solksjaer (1998/99, Manchester United)
The baby-faced assassin has been the Premier League’s highest-scoring substitute in two seasons. He netted three times from the bench in 1996/97, and went two better a couple of campaigns later. His overall total was a little skewed by his record-setting turn in an 8-1 win over Nottingham Forest, where he became the first Premier League substitute to ever score a hat-trick. He added a fourth in that game, scoring his first goal as a substitute that season in a win over West Ham a month prior.

Robert Earnshaw (2004/05, West Brom)
One of the greatest thinkers of this or any other generation, Robert Earnshaw was one of the first players to follow in Solskjaer’s footsteps. Six years after the Norwegian set the bar, Earnshaw became only the third substitute to score a Premier League hat-trick, with Jimmy Floyd Hasselbaink (March 2004) taking the silver medal. Earnshaw’s treble against Charlton in March 2005 was also the first hat-trick scored by a West Brom player, and meant that he became the first and, as yet, only player to have scored hat-tricks in all four professional divisions in England, the FA Cup, League Cup and in an international fixture.

Marlon Harewood (2007/08, Aston Villa)
“Some people come on as a substitute and never get a kick. He has been able to force his way into the game, and make a big impact in games,” said Martin O’Neill after seeing Marlon Harewood score a late winner for Aston Villa from the bench against Reading. The 28-year-old could understandably not find a way of displacing either John Carew or Gabby Agbonlahor in the starting line-up, but took his chances wherever possible in his first season at Villa Park. Harewood started just one Premier League game in 2007/08 – and that was due to injury in a 4-0 defeat to Manchester United – with each of his five goals coming as a substitute.

Javier Hernandez (2010/11, Manchester United)
Only two players have ever scored more Premier League goals as a substitute than Javier Hernandez (17). His most productive season from the bench saw him score vital goals in wins over Wigan, West Brom, Blackpool and West Ham, as well as a consolation in a Dirk Kuyt-inspired 3-1 defeat to Liverpool. Considering Manchester United won the Premier League title by nine points that season, his contribution can safely be declared to be rather crucial.

Victor Anichebe (2011/12, Everton)
Peter Crouch (121) and Shane Long (117) are the only players to have made more substitute appearances in the Premier League than Victor Anichebe (105). The zenith of his bench-impressing came during the 2011/12 season, when he scored a winner against West Brom and equalisers against Aston Villa and Wigan as Everton’s knight in shining armour. And David Moyes reckons that side was just an elite centre-forward away from winning the title. Silly sod had one right under his nose.

Papiss Cisse and Loic Remy (2014/15, Newcastle and Chelsea)
The former started just 11 Premier League games, while the latter started only eight. But both Papiss Cisse and Loic Remy maintained solid goalscoring records in the 2014/15 season, netting 11 and seven goals respectively. They scored five each as a substitute, with Cisse sinking Remy’s Chelsea from the bench in a 2-1 Newcastle win in December 2014.

Six goals as a substitute in one season

Tore Andre Flo (1997/98, Chelsea)
It was obvious as early as Tore Andre Flo’s Chelsea debut that he could be the ideal impact player. In his first game after joining from Brann, the Norwegian replaced Mark Hughes after 68 minutes against Coventry, and found himself on the scoresheet three minutes later. He would add another five league goals from the bench that season, ending on the winning side each time.

Jermain Defoe (2001/02, West Ham)
It is quite strange to think that West Ham managed to finish 7th in the 2001/02 season despite their top scorer being primarily used as a substitute. Glenn Roeder sought to keep a talented but teenaged Jermain Defoe grounded by enforcing a pecking order that saw Paolo di Canio and Freddie Kanoute favoured more often than not. Defoe had to make do with scraps as a result, but still managed to feed the 5,000 with plenty left over. Twenty-one of his 35 Premier League appearances came as a substitute, as did six of his ten goals.

Romelu Lukaku (2012/13, West Brom)
If Manchester United want to get the best out of Romelu Lukaku, perhaps they should start bringing him on as a sub. West Brom seemed to strike the balance perfectly in 2012/13, introducing tired defences to the might and prodigious brilliance of the Belgian. He scored on his debut in a win over Liverpool as a substitute in August 2012, then scored and assisted crucial goals in a 4-2 win over Sunderland three months later. Another goal off the bench in a win over Liverpool followed in February, but he saved the best til last. West Brom were 3-1 down when he came on at half-time of the final game of the season against United, with his perfect hat-trick helping secure the highest-scoring draw in Premier League history at 5-5. He has scored three goals as a Premier League substitute in the five years since.

Edin Dzeko (2012/13, Manchester City)
Lukaku’s efforts were matched by Edin Dzeko that season. By 2012/13, the Bosnian was used to playing second fiddle to Sergio Aguero and Carlos Tevez. But he still managed to maximise his opportunities, scoring the winner against Fulham in September one minute after coming on, and netting twice in 11 minutes as a substitute to spare City’s blushes in a 2-1 win over West Brom three weeks later. He even scored as a substitute against Real Madrid in the Champions League.

Christian Benteke (2015/16, Liverpool)
No-one will look back on Christian Benteke’s solitary Liverpool season with much in the way of positive thought. Jurgen Klopp tried to compare his struggles in settling to those of Robert Lewandowski, but the defence of an under-perfoming player unsuitable to the German’s style largely fell on deaf ears. That said, the Belgian did start just 14 Premier League games, scoring six of his nine goals from the bench.

Olivier Giroud (2016/17 and 2017/18, Arsenal and Chelsea)
Only one player has ever been the highest-scoring substitute in two separate seasons for two different clubs. Olivier Giroud has scored six goals from the bench in both of the past two campaigns, but a lack of goals of any kind this season means his crown is under immense threat from Aubameyang.

Adam le Fondre (eight substitute goals, 2012/13, Reading)
The Arsenal striker is only halfway to matching the record set by Adam le Fondre in 2012/13. Reading slipped to relegation under first Brian McDermott then Nigel Adkins five years ago, but the efforts of Le Fondre should not be overlooked. He scored eight goals as a substitute, starting just 11 Premier League games, with only three players boasting a better minutes-per-goal ratio in the competition’s entire history.

Le Fondre was at the height of his powers in January 2013. He was voted the Premier League’s Player of the Month on the back of just 86 minutes across four games, during which he scored five goals. It quite unfathomably remains his only season in England’s top flight. The boy is still only 31; there is surely a bench for him somewhere.