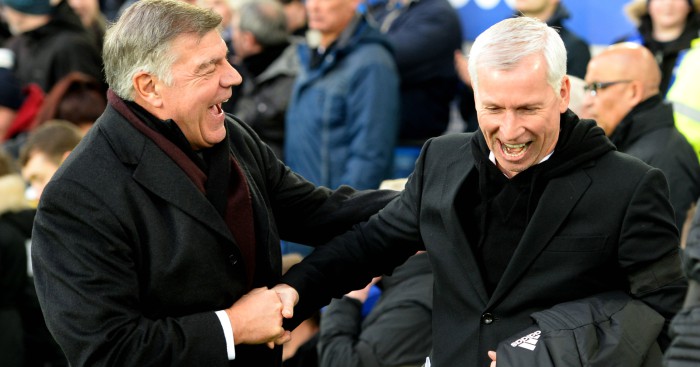 “You can’t knock our football. You can knock some of the passing that goes astray but you can’t knock me for that, I don’t pass the ball.”

Sam Allardyce is wrong on one count. Everton fans are will within their rights to ‘knock’ their team’s output, and most Toffees don’t require a second invitation to exercise those rights. Whether their short-term expectations are fair is a different argument, but almost every word uttered by Allardyce during his time at Goodison Park signpost his opinions on that particular subject.

Big Sam and Everton is an uneasy marriage, a convenient one at the time it was consummated, but far less so in the absence of desperation. ‘Our survey says: Get out of our club’ read the banner among Toffees supporters on Monday night and Allardyce, like any boss, is well aware that once the fans have turned, there is very often little hope of winning them over and maintaining your employment.

But how much of the rap should Big Sam, or for that matter any manager, take for the failures of their players?

Managers are the figurehead, supposedly the embodiment of the teams they field, but in many cases the practical influence they exert has become over-emphasised. Unless you have one of the very best, or the very worst, then success or failure is likely to hinge more greatly on other factors, including the whims and mood of the players.

Of course, managers can influence those factors and the motivation levels of any individual or group. The very best get more than you might expect from the investment in any particular squad, while the very worst provoke the opposite effect. But, at the top level, we appear to have reached a point where the balance of accountability has swung too far towards those watching from the dug-out rather than the players on the pitch, despite the ever-increasing rewards for those players.

Is that fair when we are in an era when an increasing number of clubs are turning towards a model that restricts and limits a manager’s influence more than ever?

The current climate makes it sensible for many clubs to implement a sporting director structure, where a change of manager – regardless of the circumstances – and very often his entire backroom staff does not trigger instability and comprehensive change just for change’s sake. Such a structure leaves managers with less influence over crucial matters such as recruitment and even playing style, but never before have they been held as accountable for the performances of their team. By fans, players, chairman and so too the media. Less power, more blame.

Unfortunately for managers, given they are the most dispensable, they are the first to carry the can. It’s a lot harder to change an owner or a board, just as it is far more complicated to revolutionise a playing squad. So in the absence of success, the manager is the obvious and convenient scapegoat while anyone else culpable gets a fresh start.

That is despite the manager holding the least sway. Studies suggest that spending on wages is the most significant factor in league position and that being true, it takes a truly special manager – one armed with something different, like Brian Clough or Arsene Wenger during his early years at Arsenal – to buck that trend. If managers aren’t bringing that rare quality, which by definition the vast majority cannot, then how great a difference can they make?

Spending money wisely is crucial, unless you are managing one of the few clubs where almost limitless funds mean mistakes can be easily corrected. But modern managers have relinquished a lot of their recruitment influence to sporting directors or, in some cases – like at Allardyce’s Everton with Steve Walsh – specialist recruitment gurus. The Toffees seem to be in the majority by implementing such a set-up.

That isn’t necessarily the wrong approach but it does mean that managers are now charged with eking out as much as they can from players that are often forced upon them. And, as Allardyce says, managers can implement whatever proven strategies they like, but ultimately, the onus is on a player to invest in, perform and carry out the instructions they have been given.

This is where the debate over Paul Pogba’s fortunes at Manchester United appears to have become skewed. Listening to many, it seems Jose Mourinho is to blame for Pogba’s form, which can best be described as patchy. The manager has been unable and/or unwilling to hide his frustrations with his record signing but much of the blame continues to swirl around Mourinho. Ultimately, what more can he do?

Mourinho has tried to shape his team around Pogba, trying him in almost every concievable midfield position. In none thus far has he offered consistent world-class form, and in some, he appears incapable or, even worse, unwilling to carry out the basic duties expected of a player in those roles. At what point does Pogba become responsible for his own form, rather than the exasperated manager?

And coaches do not always help themselves in such regard. Knowing that increasingly flaky players hold ever-expanding levels of influence over the boss’s employment prospects, managers attempt to deflect the blame – often onto themselves – to insulate their squad. Players are given everything they require to perform, way past the point of being mollycoddled, but little of the responsibility when they fail. Managers may see such a protection tool as the best short-term option during a packed season but used continually, a lack of accountability breeds a weak mentality.

Usually, only when a manager is thinking towards an exit strategy will he pile the blame onto his players, which is equally counter-productive if the balance lurches dramatically and unevenly.

Knowing they are almost always only a poor run of results away from the dole, many managers now micro-manage in an effort to exert as much influence in as little time as possible. So often it is futile. Even the ‘new manager bounce’ has been proven to be something of a fallacy so it is no wonder that, in most cases involving a manager in the majority group between exceptionally good or exceptionally poor, that the difference they make is usually slight.

Simon Kuper in 2009 took such a theory to the extreme: ‘In English football now, managers could probably be replaced by stuffed teddy bears without their club’s league position changing’, he wrote for FT.com in 2009. ‘The manager serves chiefly as a marketing device to fans, media, sponsors and players. He is the club’s spokesman. Totemic faith is invested in his powers. As there isn’t much he can actually do, the key thing is that he looks the part.’

Kuper penned that piece two years after Stuart Pearce had himself tested the teddy bear theory by sitting Beanie Horse on the touchline in the hope his daughter’s treasured companion might arrest Manchester City’s poor run of form. It seemed to do the trick as they beat West Ham. #announceBeanieHorse.

Allardyce is unlikely to try anything similar, and he would argue against Kuper’s assertion for the same reason turkeys don’t lobby for Christmas. But the issue of image is all-important when it comes to managers, even if that is an inconvenience to any outsider looking for a target to blame.

Big Sam probably recognises the writing is on the wall for his Everton tenure given his face clearly doesn’t fit at Goodison Park, in the same way it didn’t at Newcastle or West Ham. But Allardyce is one of the few characters who will highlight the failure of players to accept their responsibility before the fans really turn; the fact that it seemingly always ends in a parting of the ways reflects equally on those players as it does on him.

But top-level footballers will continue to hide behind their manager while the myth over their level of influence is peddled and the players’ accountability continues to decline. So too will owners and chairman, who know that changing the face in the dug-out and the one sat before the press conference desk is the swiftest way to a quiet life, if only briefly, when the road to success is evidently a very expensive one that most cannot afford to tread.

The truly outstanding managers are those who have been able to exert whatever unique knowledge or attribute they possess while being fortunate enough to enjoy the circumstances and environment that allows them to do so. The others don’t carry nearly as much influence over a team’s outcomes as football would have you believe and, as Allardyce protests, they cannot do the players’ jobs for them, especially when the players choose not to do it themselves.

But still it is the manager who cops the blame when yet another pass fails to find its target.