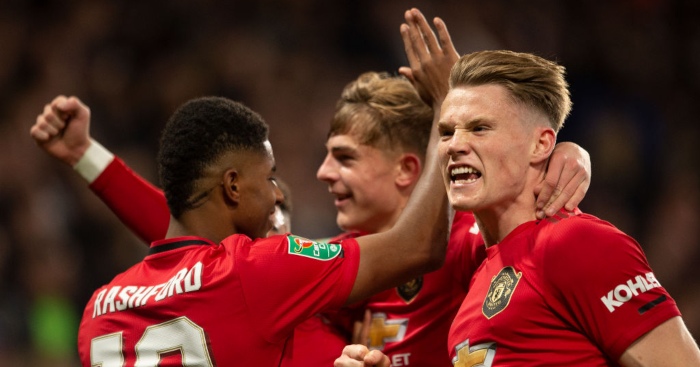 Send your thoughts to theeditor@football365.com, and your votes here.

“Average midfielder” dominates Chelsea twice
Nice of Aaron (CFC, Ireland) to run the rule over United’s midfield, labelling Scott McTominay an “average midfielder at best”. Presumably the CFC in his moniker is an abbreviation of Chelsea Football Club, and not the Christian Fellowship Church in Ireland. That being the case, it should not be lost on Aaron that the same “average midfielder” dominated Chelsea’s midfield twice this season; firstly in a 4-0 thrashing at Old Trafford, and secondly in a lesser-spotted victory for us at the Bridge in the League Cup. The latter was a match during which he made the most tackles on the pitch and had the most shots for Utd.

Some people used to say Michael Carrick was average too. Some people are morons.
Garey Vance, MUFC

For Spurs to reach that total, they would have to get 2.23 points per game for the remainder of the season, the equivalent of an 85 point campaign

In short, it’s unlikely they will be able to catch up unless they go on a virtually unprecedented run between now and the rest of the season
Matt L

‘Maurino’
It’s Friday. I’m enjoying a bit of a career break and, quite frankly, I’m a bit bored.

Whilst everyone (ok not everyone) else has been giving tremendous insight and beautifully articulating all sorts of reasons the Spurs drama is good/bad and everything in between, this is what I’ve been thinking about; has anyone else noticed that if you take ‘Maur’ from Mauricio and ‘ino’ from Pochettino you get ‘Maurino’ which doesn’t actually spell Mourinho. Anybody? Hello?
Glen, Stratford Spur

Robben and Duff both scored less than 20 goals in total if wikipedia figures are correct. Both class players but certainly not scoring 20 a season.

Measure of success
In answer to Ted Manchester who listed 14 clubs who had reached finals over the last ten years, out of them clubs only two kept the manager for more than 2 seasons after the final.

Even the 3 teams listed which actual won the cup only kept their manager on average of 5 months afterward. I don’t know if Ted is a Man Utd follower but they sacked theirs when he won the cup, as did Liverpool when reaching the two previous finals available to them even winning one.

A measure of success in current football is league position, Wenger was right the 4th place trophy will probably keep you in a job, the rest are trinkets.
Gary in Germany

What the ‘trophies equal success therefore Poch wasn’t’ brigade seem to be missing from their judgement, is that Poch’s success has made this conversation possible. He changed the entire ethos at the club to the point that fans (of other teams) can now debate whether he can be considered successful or not. By the sheer brilliance of his work, he has undermined his work to the point that people think he should have done better.

It would have been nice to have a league cup, but does anyone consider Juande Ramos as a successful Spurs manager? There are a finite number of trophies, and there can only one winner of each. And in the era of a crisis around the corner, Pochettino helped build a big club against the run of play, and made a top 6 through pure management ability. The fact that you think he wasn’t successful, adds further to the work that he did.
Neill, Ireland

Productivity
Between the return of real football, the articles on F365 & the release of FM20 all I know is that i’m doing f**k all work this weekend.
Suds (Alt + Tab + Fake Work Excel Spreadsheet)

Big Weekend
Cudos to Mr. Watson for summarizing the last 15 f**king years as an Arsenal supporters :

It should be simple. But, Arsenal