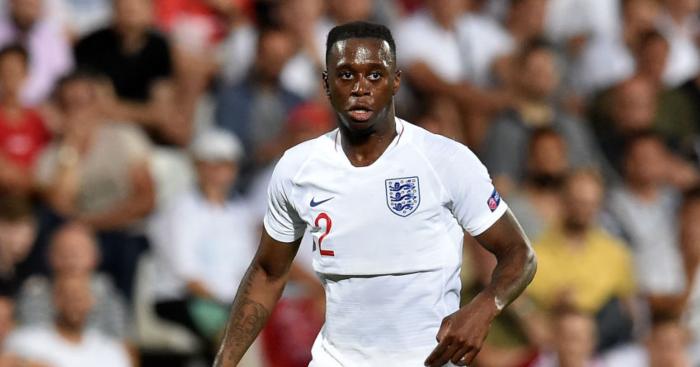 Aaron Wan-Bissaka’s head is “bound to” have been turned by Manchester United’s interest, according to England Under-21s boss Aidy Boothroyd.

The Crystal Palace defender appears to be closing in on a move to Old Trafford but suffered a nightmare against France on Tuesday.

The 21-year-old’s injury-time own goal condemned the Young Lions to an opening Euro 2019 defeat in Italy as he failed to impress in the 2-1 loss.

Talks between United and Palace over a deal, likely to be over £50million, are reportedly ongoing and Boothroyd admitted the speculation may have affected Wan-Bissaka.

“For a young player who all he knows is Crystal Palace academy and Crystal Palace it would be daft not to say that in some way he must think about it,” said Boothroyd, ahead of Friday’s must-win game against Romania.

“I would not be truthful if I told you anything other than that. What I will say is because he doesn’t say too much you don’t get to find out too much. Aaron keeps things to himself.

“He is a very private guy. When that speculation is flying around it is bound to turn your head. But having said all of that had he not scored the own goal we probably wouldn’t be having this conversation.”

Boothroyd also hinted he was happier with the way Everton conducted themselves when Jordan Pickford joined the Toffees from Sunderland for £30million just two days before England’s Euro 2017 opener.

“In Poland last time we had a similar situation with Jordan, a lot of speculation,” he said.

“Everton agreed the deal, they worked very closely with us and were very respectful in terms of not getting involved in our build-up.

“In the end it was done in a hotel down the road away from everything else, all the medicals got done.

“If that was to happen we certainly wouldn’t be blocking anybody, we’d be talking to people and seeing if we could help out – provided both clubs were happy with it.

“If that happens we’ll oblige and if it doesn’t suit us we’ll find a time when it does.”

The boss offered few hints over whether Wan-Bissaka would start on Friday, with England third in Group C after Romania thumped Croatia 4-1 in their opener.

Everton’s Dominic Calvert-Lewin will start up front in Cesena with England needing three points to stand a chance of reaching the semi-finals.

But Boothroyd refused to discuss what the Young Lions may need to do to qualify.

He said: “There could be all sorts of connotations by the end of it. There are tight margins. If we had stopped our game on 86 minutes we’d be saying what a good performance it was.

“Incidents happen and you have to deal with them. You recognise the time to go in and get things moving and other times where you say nothing and let the group do it themselves. The focus this week has been very good.”