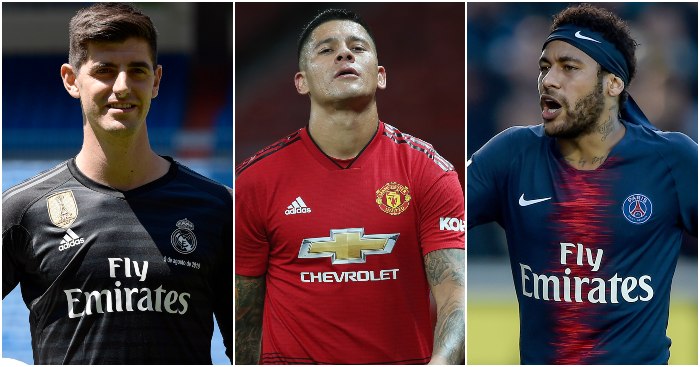 In the unlikely event this lot show up, they will be playing 4-3-3. If they want to…

GK: Thibaut Courtois
The Belgium keeper was always difficult to warm towards during his Chelsea career, most of which he spent pining for Madrid. When it seemed he might not get his move last summer, Courtois simply did not bother to show up for pre-season training.

He tried to explain that decision once safely in Spain after Real forked out £35million: “Because the transfer was closed I did not show up because I thought it better not to disturb the team and the squad. If I did go there maybe, I didn’t want to be toxic, so obviously it is a pity because I love Chelsea.”

Funny way of showing it, Mr Tickle. Still, Chelsea fans had the last laugh when Courtois stunk out the Bernabeu for much of his first season.

RB: Kieron Dyer
Right-backs are solid, right-backs are reliable. You can rely on a right-back not to spit their dummy over a transfer, which presents us with a selection headache here.

Handily, former Newcastle star Dyer behaved like a brat when Sir Bobby Robson asked him to play on the right against Middlesbrough in 2004. Dyer didn’t realise until it was too late that when Sir Bobby asked you to to something, you did it. And you said ‘thank you, Sir’.

“If there was one thing I could go back to and erase in my life, it would be that,” Dyer reflected after Robson’s death in 2009. “I can’t believe now that I acted the way I did. Afterwards, the press got stuck into me for letting Sir Bobby down. But he would not hang me out to dry. Instead, he came straight out of his press conference and said to me ‘they’ve got a story brewing but I’ve just told them you didn’t play because of your tight hamstring’. I was thinking ‘I’ve just let you down and here you are still protecting me’. It was unbelievable.”

CB: Sebastien Squillaci
The France defender refused to turn out for Sevilla in their Champions League qualifier against Braga in 2010, but he either neglected to tell the coach, or Antonio Alvarez didn’t take him seriously, because Squillaci was named in the starting XI.

“I knew if I played against Braga then I would not have been able to play for Arsenal in the Champions League,” Squillaci explained.

Of course, he got his move – much to Arsenal’s regret. Squillaci was wretched for the Gunners, making only one Premier League appearance throughout the final two years of his three-year £50,000-a-week deal, which he saw out while steadfastly refusing any kind of loan move that might have involved activity more strenuous than a daily jog around the training ground.

CB: Marcos Rojo
It was “a huge surprise” to Rojo that Louis van Gaal wanted to bring him to Manchester United in 2014, which can be explained by some of his performances since. But the defender was determined to do whatever it took to make the move happen.

“I was in Portugal when my representative told me. He asked me to stay calm but I could not. I started living this dream. I could not think of anything else. I would call him every day, but when it seemed the transfer would not happen then I refused to work with Sporting.”

So, in stepped Juan Sebastian Veron because, why not?

“Veron was like a strict father to me, scolding me. He called me one day when I had refused to train with Sporting and said ‘Do not be stubborn. If Manchester United wants a player then they will not let you escape.”

Five years on, the Red Devils are trying to shove Rojo through the door. For a ridiculous price.

LB: William Gallas
The France defender not only refused to play in the 2006 FA Cup semi-final, but he allegedly threatened to score own goals if forced to line up against Manchester City on the opening day of the 2006-07 season, such was his desire to quit Chelsea.

That and a series of other allegations formed the basis of the Blues’ story, a view Gallas confronted: “I never went that far. But if people want to hide behind false accusations in order to give a reason for why I left so they can calm down the club’s supporters then they can.

An acrimonious divorce saw Gallas head to Arsenal, with Ashley Cole going the other way. Despite all the charges levelled at him, Gallas’s greatest crime was yet to be committed: accepting Denis Bergkamp’s No.10 shirt.

CM: Morgan Schneiderlin
With everyone else jumping the Southampton ship in 2014, Schneiderlin presumed he would be allowed to go too, with former boss Mauricio Pochettino keen to pay £10million to take him to Tottenham. But Saints drew the line at losing the France midfielder.

“Calum Chambers signed for Arsenal the day before our meeting and the club saw the fans getting mad. They thought: ‘If Morgan leaves the stadium will be burnt’. So they told us: ‘Morgan is not for sale, we won’t listen to anything. That is the decision and there is nothing more to say’.”

Schneiderlin declared himself ‘not physically or mentally ready’ for a pre-season friendly against Bayer Leverkusen, but that was as long as his strike lasted. He was back for the opening weekend trip to Liverpool and got his head down before being allowed to leave the following summer for Manchester United.

LM: Dimitri Payet
The France playmaker was given a new £125,000-a-week contract only six months after signing his initial West Ham deal in 2015. But that wedge wasn’t enough to keep him happy in east London; the playmaker was determined to move back to Marseille.

Payet told West Ham he would “never kick a ball again for West Ham”, leaving Slaven Bilic somewhat confused: “We have said we don’t want to sell our best players but Payet does not want to play for us. We are not going to sell him.”

They did eventually, but only when it became clear they had no choice. Marseille upped their offer to £25million and the Hammers decided to get shot after a season and a half rather than leave him to rot. David Sullivan insisted: “To be frank, my board and I would have preferred for him to have stayed in order to make an example of him, as no player is bigger than the club.”

Another season and a half down the line, West Ham have reportedly been offered the chance to re-sign Payet.

RM: Raheem Sterling
Liverpool were looking to tie down Sterling to a new deal at the start of 2015 but Sterling, or rather his agent had other ideas. The winger insisted he would not negotiate until the end of the season, upon which point Aidy Ward blurted out: “I don’t care about the PR of the club and the club situation. He is definitely not signing. He’s not signing for £700, £800, £900,000 a week.”

Ward then called Jamie Carragher “a knob” and, understandably, Liverpool didn’t like the cut of his jib. Sterling could go, but only when they received an offer that matched their £50million valuation. Man City had offers of £30million and £40million rejected, by which point it was time for Sterling to return for pre-season training. He threw a sickie for a couple of days before refusing to travel on the pre-season tour of the Far East and Australia.

Thankfully for Sterling, City eventually coughed up around £49million. All parties, not least Ward, will likely claim to have got the better end of the deal.

F: Carlos Tevez
Tevez had already tried to leave Manchester City once before he refused to come off the bench during a Champions League clash at Bayern Munich in September 2011. City backed a raging Roberto Mancini, who claimed Tevez “wanted out of City”, while the player, upon being suspended and fined, decided he’d had enough and legged it back to Argentina.

While Tevez was away, Kia Joorabchian attempted to negotiate a move to AC Milan, but when they refused to meet City’s £25million asking price, the former United star was forced to return to Manchester.

After getting somewhere close to match fitness, Tevez returned to Mancini’s squad in March, just in time to score four goals as City pipped United to the Premier League title in 2012.

CF: Leonardo Ulloa
The Argentina centre-forward gets the nod over Antoine Griezmann, whose desire to join Barcelona is somewhat understandable, regardless of his behaviour. Ulloa went on strike because Claudio Ranieri refused to sell him to Sunderland. David Moyes’ Sunderland. THAT Sunderland.

“I need to feel like a footballer again,” said Ulloa, apparently unaware that Moyes could make him feel many things, but probably not ‘like a footballer’. “I feel betrayed by Ranieri and let down by the club. I will not play again for them.”

Ranieri was gone before Ulloa, who played in a Champions League quarter-final later that season while Sunderland dropped like a rock.

F: Neymar
‘Neymar has the superstardom and he has the talent; he just needs to learn how to become a footballer again, and once more show us how we can love him,’ wrote Daniel Storey on Monday. Not 10 hours later, PSG issued a statement after the Brazilian didn’t see fit to turn up for training on Monday.

“PSG regrets this situation and will take appropriate action,” which presumably means fining a man already richer than God. Leonardo put some more meat on the bones by saying that Neymar will be granted his wish of a move should a club – he names Barcelona – demonstrate the capability and willingness to pay for a player with three years remaining on his contract.

“It will not be done in a day, that’s for sure,” Leonardo added, which suggests Neymar would be best advised to get his arse back into work if he cares one iota what legacy he is creating.