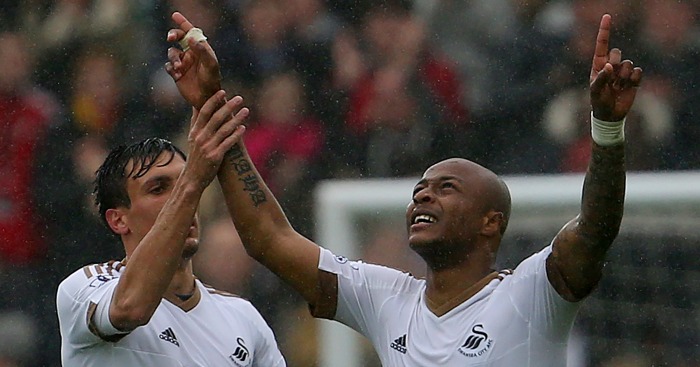 Andre Ayew reportedly offered to play for Liverpool for free before he joined Swansea last summer.

Ayew scored a brace for the Swans on Sunday as they secured Premier League safety, denting Liverpool’s European hopes in the process.

The 26-year-old has been impressive for the Welsh side this campaign, scoring 10 of their 37 goals in the Premier League.

The boyhood Liverpool fan reportedly offered to play for free for the Reds after his exit from Marseille last summer, with the Daily Mail suggesting he was willing to ‘go without wages until January to prove himself’.

However, the Merseysiders chose to pursue other targets, instead signing Danny Ings and Christian Benteke. No Liverpool player has reached Ayew’s total of ten Premier League goals this season.

Agent Mark McKay of ExcelFoot, who negotiated Ayew’s move to Swansea, admitted there was genuine interest from the Reds at the time, before they opted to turn their attentions elsewhere.

“It has always been Andre’s dream to play for Liverpool but unfortunately they opted to pursue other targets at the time.”

Sunderland made approaches to sign the player in January, reportedly offering player exchanges and cash amounts of up to £10million.