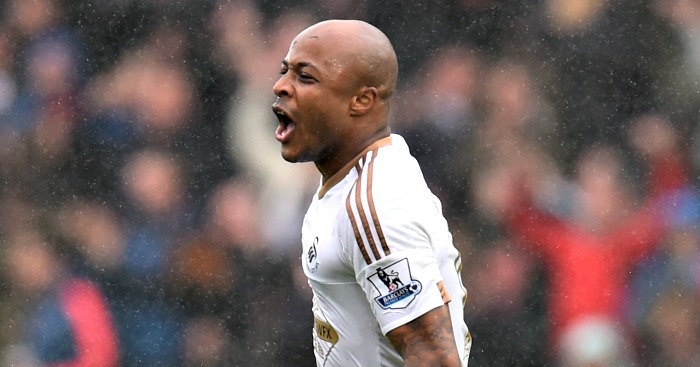 Ayew was heavily linked with Sunderland during the January transfer window and there have been reports of summer interest from West Ham.

The Ghana international says he is happy at Swansea after finishing as the club’s top-scorer this term with 12 goals.

But Ayew stopped short of committing himself to a second season in south Wales after scoring in Swansea’s closing Barclays Premier League game, the 1-1 home draw with Manchester City on Sunday.

“I think you should ask the chairman,” said Ayew, who signed a four-year deal at Swansea following his free transfer from Marseille, on his future.

“We’ll see what’s going to happen, we’ll have a discussion and see the way forward.”

Ayew, however, says he would like to continue playing in English football.

“I’ve enjoyed the Premier League, I think it’s the best league in the world,” said Ayew.

“The intensity, the determination from every team. It’s a league where you enjoy every game.

“Every game is difficult, you can never say you’ve won it before you’ve played it.

“I hope to stay in the Premier League if I leave, but I’m here at the moment at Swansea.”

The 26-year-old feels Swansea, who ended the season strongly to finish 12th, will improve further next term now manager Francesco Guidolin has signed a two-year contract to stay at the club.

“I think everyone has learned a lot from the season,” said Ayew.

“We’ve had three managers, which is not easy to deal with.

“But we managed to cope with all the changes and stayed up.

“We now have a coach with a lot of experience who knows what he wants to do.

“I’ve had friends from the national team who have been coached by him, and I know what he can do.”