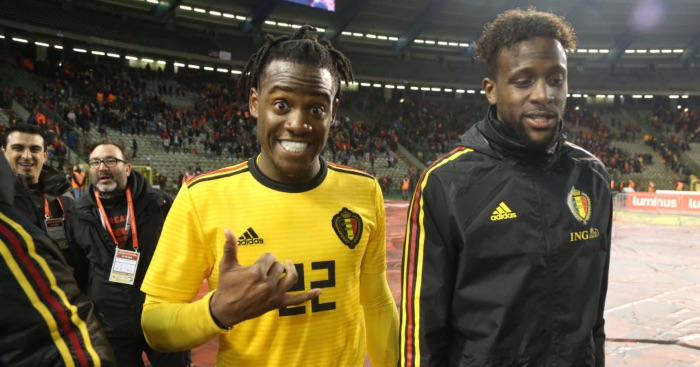 Not good enough for the Premier League? Here are five stellar EFL Cup performers who will be back on the bench this weekend while Mesut Ozil looks set for a rare start…

Michy Batshuayi (Chelsea)
The Belgian’s goal against Manchester United on Wednesday evening drew comparisons from Gary Neville first with Diego Costa, and then – when reminded by his fellow commentator of Chelsea’s most prolific striker – Didier Drogba. Not the sort of goal associated with Frank Lampard’s Chelsea revolution, it was a ball hit long from the back for the striker to do the rest. Having headed the ball over a hapless Harry Maguire – though of course the England international’s terrible defending was barely mentioned – he powered through two challenges and hit the ball very hard, and very accurately into the bottom corner.

whatever let’s all laugh at £80m harry maguire getting rinsed by michy batshuayi pic.twitter.com/82PhqZFvfl

“Batshuayi doesn’t play very often, but when he does, he always seems to be scoring,” was the commentator’s next observation, backed up by the Belgian’s statistics this season. He has scored a goal every 46 minutes, including the vital winner at Ajax in the Champions League, while Tammy Abraham nets every 110 minutes. His hold-up play is undoubtedly inferior to his English team-mate – the ball does bounce off his shin from time to time – but if he keeps banging in the goals at an average of two per game, any dip in form for Abraham (who has not scored on his last three starts) could see Batshuayi handed his chance; his form this season suggests he might just take it.

Divock Origi (Liverpool)
If it’s not an important goal, he doesn’t bother. Last season he scored the winner in the Merseyside derby, that goal from the quickly taken corner against Barcelona at Anfield and produced perhaps the only piece of quality in the Champions League final to see off Tottenham. On Wednesday he was at it again, volleying home brilliantly to level the scores at 5-5 against Arsenal in the Carabao Cup.

But, like Batshuayi, Origi is a back-up and he always will be. With any performance inevitably compared to those of Sadio Mane, Roberto Firmino and Mohamed Salah, the Belgian will always look something close to woeful in comparison. On signing a new long-term contract with the Reds in the summer the 24-year-old said: “At the end of my career I want to sit back and be proud that I used all of my gifts and talents.” As it stands he looks set to have a bedside drawer laden with medals, but memories of fleeting magic moments.

Gabriel Martinelli (Arsenal)
His two goals against Liverpool on Wednesday means that’s seven goals in seven games for Arsenal’s £6million Brazilian. He’s equalled Ian Wright’s record of netting in each of his first four starts for the Gunners and has outscored fellow teenage European starlets Jadon Sancho and Joao Felix this season. While comparisons with Thierry Henry are ludicrous – the only obvious similarity being a propensity for goalscoring – the excitement surrounding the 18-year-old is justified; he is a skillful, two-footed striker with a predatory instinct and an eye for a pass.

A night that Gabriel Martinelli will never forget ❤️

Watch out for the Kieran Tierney assist 🎯 pic.twitter.com/EOaHFPt5FC

Unai Emery’s desperation to bed in Nicolas Pepe at all costs is understandable given his £72million price tag. The Arsenal boss is under enough pressure without being questioned about why he’s leaving their record signing on the bench. But the best way to relieve pressure is to win games and Martinelli has so far proved more capable of doing that than his high-priced team-mate. Turns out £72million can also buy you 11 Gabriel Martinellis, with a little left over for celebratory post-match beers.

Brandon Williams (Manchester United)
Earlier this week Ole Gunnar Solskjaer – for the 57th time this season (unconfirmed) – claimed his academy graduates were about to make the step up into the Premier League starting XI. He said: “Some people can’t understand why I am gambling on young players with no experience, but I don’t see it like that. Football is about taking risks. Playing safe isn’t in Manchester United’s DNA.”

Horrible reference to United’s ‘genetics’ aside, this is absolute bulls**t. No-one has said he is “gambling on young players” and no-one thinks he is “taking risks”. Scott McTominay has been very good, but that “risk” was taken by Jose Mourinho and the other young academy graduates have barely got a look-in in the Premier League. Even Mason Greenwood – “the best finisher at the club” – has played just 102 minutes.

His decision not to play Brandon Williams is perhaps the most confusing. The 19-year-old was brilliant against Chelsea in the Carabao Cup and he proved in just one game he is a far better option than an ageing Ashley Young playing out of position on the left side of the defence. Let’s make a deal Ole…we promise not to criticise you for “gambling on young players” – not that we ever have anyway – if you actually play them.

Eric Garcia (Manchester City)
Despite all party lines stipulating unwavering support for team-mates, occasionally, strange psychological quirks occasionally lead to an individual wishing a counterpart ill will. While Eric Garcia will not have been happy at the injury that has sidelined Aymeric Laporte for the first half of this season, it’s easier to imagine his sadistic enjoyment of the mistakes of Nicolas Otamendi or Pep’s castigation of John Stones for not having his shinpads on.

Given Pep Guardiola’s issues with injury and poor form in defence, Garcia could have been forgiven for thinking he would have played more than the 27 minutes he has been afforded in the Premier League so far this season. The Manchester Evening News described his performance in the EFL Cup as ‘impossibly calm and collected for one so young’ and with Pep starting midfielders Fernandinho and Rodri ahead of him in the Premier League, Garcia must be wondering in what circumstances he will actually be given his chance.

Tommy Doyle getting all the praise and rightly so, but Eric Garcia is different class. Every time he’s given chance he delivers 8/10 performance.