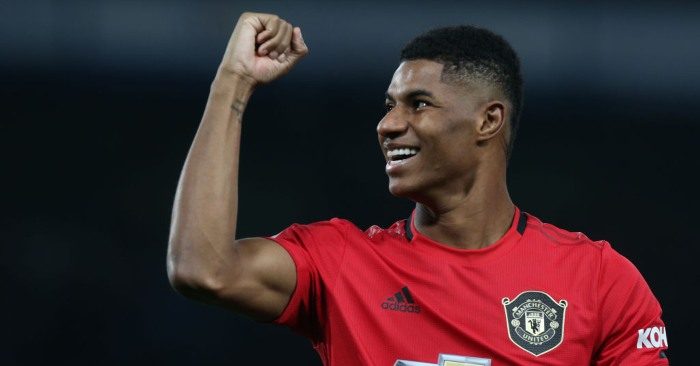 Bournemouth v Manchester United
Eddie Howe’s men have failed in score in any of their last three Premier League games and while it would be a stretch to describe the Red Devils as ‘flying’ right now, they have won their last three in all competitions.

And another thing. Amidst all the criticism, it’s oft forgotten just how good Marcus Rashford is – 52 club goals by the age of 22 (equalling Harry Kane’s record). In arguably the worst Manchester United side for 20 years. Mad skills, bruv.
Betting: Rashford to score first at 21/4 (888 Sport)

Arsenal v Wolves
It’s been a crazy week for Arsenal fans. The Gunners were left stunned after letting a two-goal lead against Watford slip last week. Then their second string played out a cwaaazy 5-5 draw at Anfield in the Carabao Cup. Mesut Ozil simply has to start this weekend. Wolves will no doubt sit deep and look to play on the counter. It’s just made for the jinky German, likesay.
Betting: Arsenal to win and both teams to score at 12/5 (Bet365)

Aston Villa v Liverpool
Two clubs with a rich and storied history clash at Villa Park on Saturday and both teams to score looks a no-brainer at 3/4. The Reds have been unreal so far this season and are now unbeaten in 27 Premier League matches, but face a proper battle here and defensively are not the well-oiled unit they were for much of last season.
Betting: Both teams to score at 3/4  (Bet365)

Brighton v Norwich City
I babysat for my young nephew on Tuesday and with Donald Trump on the TV he asked me how politics worked? So by simple way of explanation I took all of his sweets off him and told him to f**k off. Home win. Banker.
Betting: Brighton to win 2-0 at 9/1 (Bet365)

Manchester City v Southampton
It’s been a rough auld week for Southampton. 9-0 home defeat to Leicester followed up with back-to-back trips to the Etihad? Lordy! The Saints have shipped 16 goals in their last four league games and could easily take another paddling here against a City side desperate to make up ground on leaders Liverpool.
Betting: Manchester City to win 5-0 at 11/1 (Bet365)

Sheffield United v Burnley
Fair play to the Blades. They are laughing directly into the face of about 70% of my ante-post bets with their annoyingly excellent start to the season (I’ve gone in heavy on them to go down at 8/11). Can they extend a three-match unbeaten run and stay in the top half? It’s possible, but more likely that the first Premier League meeting between these sides finishes all square.
Betting: 1-1 draw at 11/2 (Bet365)

West Ham v Newcastle United
In the early 80s a petrol bomb was hurled inside St James’ Park during a match between these two sides. Thankfully, things have moved on since those dark days. Mad to think though you could take petrol into the match back in the dizzle, and now you can’t even take a pint of warm, pissy lager into the stadium. West Ham did the double over Newcastle last season, and we fancy yer man Andriy Yarmolenko to lead the Toon a merry dance on Saturday.
Betting: West Ham (-1) to win at 11/5 (Paddy Power)

Watford v Chelsea
Watford look in real bother this season. Bottom of the league and facing a Chelsea side who have scored an impressive 16 league goals on the road so far. The Blues have also won 16 of their last 20 matches against sides starting the day bottom of the table, so anyone not steaming into Chelsea here is basically just a bad tramp.
Betting: Chelsea to win and over 2.5 goals at 5/4 (Paddy Power)

Crystal Palace v Leicester City
How are Leicester odds-against here? I don’t get it. Honestly. Like, I’ve woken up on a sun lounger next to a fire pit in a stranger’s garden, reeking of ale after a heavy bender, and been less confused.
Betting: Leicester City to win at 6/5 (Paddy Power)

Everton v Tottenham
I’m looking at Everton’s price here with a brew and a Rich Tea biscuit. Sometimes – in these troubled times – you need a straightforward biscuit and the Rich Tea is an solid but austere biscuit. A classic of the genre. Spurs have shipped 11 goals in just five Premier League away games so far this season. The Hotspurs are also looking for a first win in four matches after dropping to 11th. The tea is nice. The biscuit is better. And I make Everton live dogs at Goodison.
Betting: Everton to win at 9/5  (888 Sport)