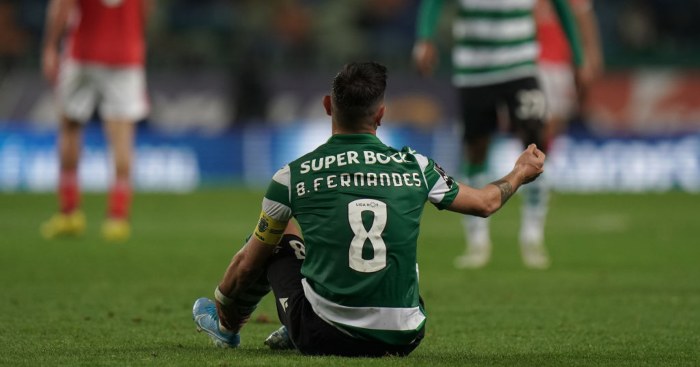 Manchester United are prepared to walk away from a potential deal for Sporting Lisbon midfielder Bruno Fernandes, according to reports.

Fernandes has managed to contribute 13 goals and ten assists in 22 matches in all competitions this season for Sporting.

Reports in Portugal had claimed early last week that United had struck a €70m deal for Fernandes but fresh claims on Friday said that Sporting were demanding way more than the Red Devils wanted to pay.

However, sources have told ESPN that Man Utd ‘are prepared to walk away from a deal’ over the huge gap between the two club’s valuations of the player.

The report adds that Sporting want an €80m transfer for Fernandes with €65m of the fee up front and the remaining €15m made up in add-ons.

Sporting’s stance ‘has baffled United’ with the club prepared to let Fernandes leave for Tottenham in the summer for much less.

Any transfer to Man Utd is ‘on the brink of collapse unless Sporting lower their valuation’ and Ole Gunnar Solskjaer is ‘prepared to wait until the summer to bolster his squad’ if necessary.