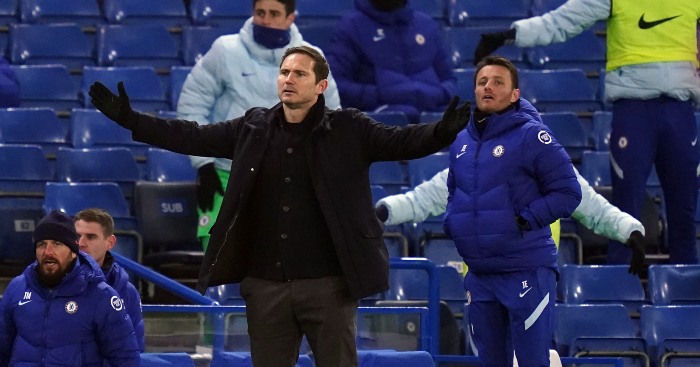 Baffle ticket
Chelsea spent over £200m in the summer transfer window and yet have just 26 points from 16 games, which makes them worse than last season, when they finished fourth in the Premier League.

So is it really so ‘baffling’ that some Chelsea fans have ‘begun to doubt one of their all-time great players’, John Cross of the Daily Mirror? It’s almost like they want to judge their manager as a manager rather than as a player.

‘Expectation levels have appear to have been raised to sky-high levels, where nothing less than a title challenge will suffice.’

Message in a throttle
On a day when those ‘baffling’ Chelsea fans might be Googling ‘Frank Lampard sack’, here comes the desperate Express website with this intentionally misleading nugget of poo:

Did he? That is rather a large scoop.

Or did pundit Andy Townsend say that it’s “far from a crisis” at Chelsea in comments that did not mention either Abramovich or indeed the possibility of Frank Lampard getting the sack?

Promised you a miracle
We have long been amused by Stan Collymore’s grasp of numbers; two years ago he predicted a 102-point season for Arsenal.

Now he is back writing about the Gunners again and he claims that ‘only if they were to win 10 more games in the next 15 could we start talking ‘projects’ at the Emirates’.

That is a slightly high bar considering Premier League leaders and title favourites Liverpool have only won nine of their last 15. If Arsenal win 10 of their next 15, we will not be talking ‘projects’ but ‘miracles’.

Almost LIVE
It’s nearly January so sod the football, it’s all about the transfers.

That’s 10am transfer news LIVE on December 29 on The Sun website.

And the LIVE transfer news at 10am on December 29 is that the Daily Telegraph reported on December 24 that Manchester United ‘retain a firm interest in Jadon Sancho and have not been put off by the 20-year-old England winger’s dip in form for Borussia Dortmund so far this season’.

So that is officially BACK ON. And it’s live…five days later.

Crowbar of the day
‘Jadon Sancho has already shown Mikel Arteta how to turn Arsenal’s season around’ – football.london

Indeed. All Arteta now needs to do is play on the wing for Borussia Dortmund and have a slightly underwhelming season after failing to secure a move to Manchester United. Or something.

Capital stuff
This, ladies and gentlemen, is football news in 2020:

And on this occasion, ages (sorry, AGES) is four whole seconds. Which makes Mediawatch feel much better about a whole lot of things.

Thrust
Over at table-topping Liverpool, there is a crisis as ‘Liverpool pair set to be thrust into centre-back role as Joel Matip to undergo scan’ (Mirror).

We are told that ‘Liverpool could be set to throw Rhys Williams and Nat Phillips into the first-team fold ahead of their trip to Newcastle’.

Won’t they just play Fabinho there? After all, he has started the last seven Premier League games at centre-half.

‘If Matip is sidelined, he will join Virgil van Dijk and Joe Gomez on the physio table – leaving the Reds with no senior centre-back.’

Yes but won’t they just play Fabinho there? After all, he has started the last seven Premier League games at centre-half, including two Matip has missed through injury.

‘Fabinho has fulfilled the role with astonishing brilliance in Van Dijk’s absence.’

‘And Jordan Henderson has also played in the backline to help Liverpool out but for Williams and Phillips, it will mean an elevated status in the first-team.’

Well it won’t because they will just play Fabinho there. Probably alongside Williams, which was the centre-half partnership that beat Tottenham 2-1 two weeks ago.

‘The Reds face Newcastle tomorrow at St. James’ Park and it remains to be seen whether either will be given a chance.’

It ‘remains to be seen’ but ‘Liverpool pair set to be thrust into centre-back role’? What a ridiculous clicky fuss to make about the same defensive situation the Reds last faced a whole two weeks ago.

Rash decision
The desperation to make team news sound remotely interesting is truly quite something.

‘Marcus Rashford gives Manchester United injury boost’ is a particularly special headline in the Manchester Evening News about a player who played 90 minutes three days ago.

‘Manchester United have been handed a major injury boost ahead of their game against Wolves tonight, with Marcus Rashford in training,’ begins a piece that offers no actual reason why Rashford would not be in training.

The only thing Ole Gunnar Solskjaer said after the Leicester game was that Rashford “felt his shoulder a bit. The lad tugged his arm, which he felt”. He might have ‘felt’ something but he went on to play the full 90 minutes. It would be astonishing if that kept him out of training three days later.

Elsewhere on the MEN, ‘Manchester United hint at roles for three star players vs Wolves’.

And it transpires that this ‘hint’ is about Bruno Fernandes, Rashford and Harry Maguire despite Manchester United/Solskjaer not mentioning any of those three players when he suggested that he will not make many changes for the Wolves game.