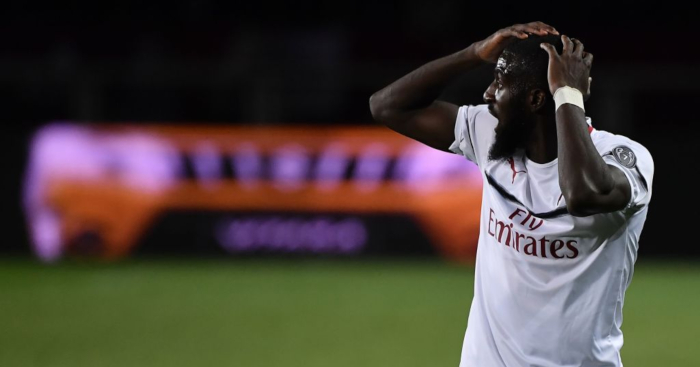 Milan beat Bologna 2-1 on Monday to boost their prospects of qualifying for the Champions League.

Gattuso’s side are three points behind fourth-placed Atalanta with three games remaining after Suso and Fabio Borini fired them to victory.

Bakayoko was an unused substitute at the San Siro, but was the subject of much confusion after he was sent to warm up when Lucas Biglia suffered an injury.

The on-loan Chelsea midfielder then seemed to argue with manager Gattuso as he sat back on the bench, with his introduction not forthcoming.

“I told Bakayoko to warm up, he took his time and I chose Mauri,” Gattuso explained.

“I have 27 players, we wear a glorious shirt and I must be objective and honest in everything I do. I waited seven or eight minutes, he still had not put on his shin pads so I made that choice.”

Having been accused of refusing to warm-up or comply with his manager’s demands and telling Gattuso to “f*** off”, Bakayoko cleared up the situation in an Instagram post.

‘For a few weeks people have been talking about me in the press but I decided to say nothing and continue working,’ he wrote.

‘But what happened tonight and the interpretation that was given that required me to react immediately because I do not accept that I am a player who refuses to take to the field when his coach asks him to and who does not respect his club and his team-mates.

‘Despite starting on the bench I was ready to give 200 per cent even if I only played 5 minutes tonight.

‘When Lucas [Biglia] began to suffer on the ground, I was asked to prepare for the change. So I prepared myself immediately and went to warm up for a maximum of 2/3 minutes.

‘Then I was asked to return to the bench. everything passes I think between 23 and 26 minutes.

‘It was when I sat on the bench that the coach spoke to me in unexpected terms and I only repeated his words. Nothing more.

‘Let me be clear: I have never refused to come into play and I do not have to drag myself to warm up. It seems to me that the images speak for themselves.

‘I had only one desire which was to enter the field and help my team-mates as I have always done and as I will do until the end of the season. Forza Milan.’

😕 This doesn't look great from Bakayoko. Appears to tell Gattuso to "f*ck off" on more than one occasion…pic.twitter.com/GWFQzle3so