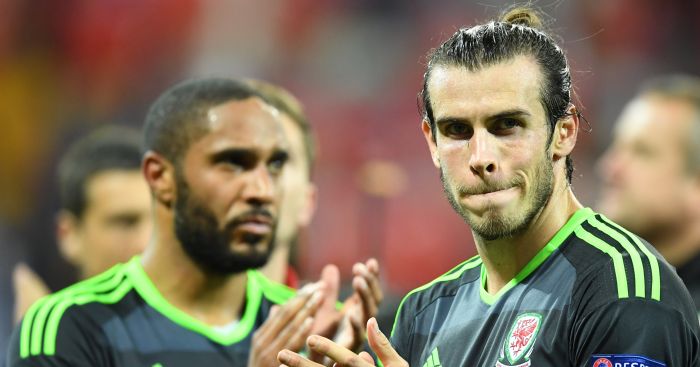 Gareth Bale says Wales players’ hunger will be greater than ever after the disappointment of exiting Euro 2016.

Wales bowed out of the tournament at the semi-final stage with a 2-0 defeat to Portugal in Lyon on Wednesday night.

But Bale hailed the remarkable journey which has seen Wales go from being ranked 117th in the world less than five years ago to reaching the last four of the European Championship.

And the Real Madrid insists the determination is there for Wales to qualify for the 2018 World Cup in Russia.

“To be so close to the final and miss out is disappointing, but we have to be proud of what we’ve achieved,” Bale said.

“It hurts now because it’s fresh but we’ve been on an amazing journey.

“The whole nation has enjoyed the journey as much as us and it’s been amazing, incredible.

“Fans, staff, everyone. It’s been one of those moments in your life we’ll never forget and very special to all of us.”

The #WAL team applaud the supporters after the game. They did their country proud #EURO2016 pic.twitter.com/Hj4i1bedLf

Thousands of fans are expected to welcome home Chris Coleman’s squad to Cardiff on Friday.

The whole country has been caught up by the team’s performances in France – the first time that a Wales side have reached the semi-final of a major competition.

But Bale says that the focus is already switching to the World Cup qualifying campaign, which starts with a home game against Moldova in September.

“Our hunger is there more than ever to get back (to major tournaments),” the 26-year-old said.

“It hurts now but we’ve enjoyed it and we feel there’s still a lot more to come.

“There’s more improvements from us and come the World Cup qualifiers – which are not too far away – we’ll get back to working hard and doing what we do best.”

Coleman expressed his pride at the performance of his players after Wales’ elimination was confirmed by two Portugal goals in three minutes at the start of the second half.

Bale’s club team-mate Cristiano Ronaldo opened the scoring with a towering header before setting up Nani for the second goal.

“We can be a better side from it,” Bale said.

“The hunger is there, the spirit is there and we’ll take all the positives from this and go into the next campaign trying to do it again.

“We always wanted to test ourselves against the best and I think we’ve done everybody proud – including ourselves.

“We can hold our heads high and give it a right go again.”