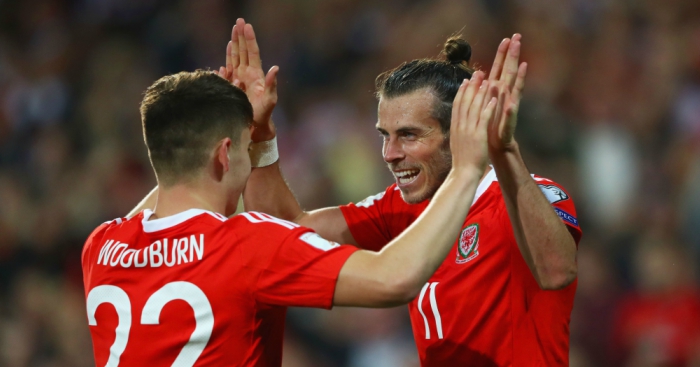 Liverpool striker Woodburn announced himself on the international stage on Saturday with a dramatic World Cup winner against Austria – just 261 seconds after coming on as a 69th-minute substitute.

But Woodburn – who turns 18 next month on October 15 – could have played for England as he had dual nationality being born in Nottingham and brought up in Cheshire.

The Football Association also made two enquiries to get Woodburn on board, even though he has been part of the Wales set-up since the age of 13 as he qualified through a maternal grandfather.

England manager Gareth Southgate responded to Woodburn’s incredible debut by saying it was “increasingly difficult” to monitor every young player and that some countries were able to fast-track youngsters quicker.

But Bale, speaking ahead of Wales’ crucial World Cup qualifier away to Moldova on Tuesday night, admitted he had played a part in Woodburn pledging his allegiance to the Dragons.

Bale said: “I remember meeting him in one game, I think it was against Holland (in November 2015).

“He was injured and he was sat in the box next to me as he’s with my agency Stellar.

“I had a little chat with him then, getting (him) on board because obviously we knew he was a great player.

“We’re delighted to have him – and he’s Welsh anyway, he’s ours.”

But Bale promised that Woodburn would remain grounded, despite becoming a national hero overnight.

“We haven’t had to have a word with him,” said Bale, who also rejected an approach to join the England set-up.

“He’s a good lad and doesn’t need to be looked after in that respect.

“He knows it was a great goal and knows what he did was amazing for us all.

“He’s just got his head down, he’s a quiet lad and got on with it.

“I know he won’t get too carried away. And I’m sure if he does we’ll all let him know! He’s been great since he came in.”

Bale said he was delighted that the next generation of Welsh players were emerging with Woodburn joined by the likes of Ethan Ampadu, Lee Evans and Tom Lockyer in the current squad.

“We’re still young in our minds, maybe not so much in our bodies. But we have had a laugh with Ben and made him feel welcome. It’s been good fun.

“When we came in it was start of transition period when John Toshack was bringing through lot of younger players to build for the future.

“But Ben, Ethan and the others are coming in to a steady squad that’s done well and with characters to really help him as well.

“It’s a good recipe that hopefully can help us.”