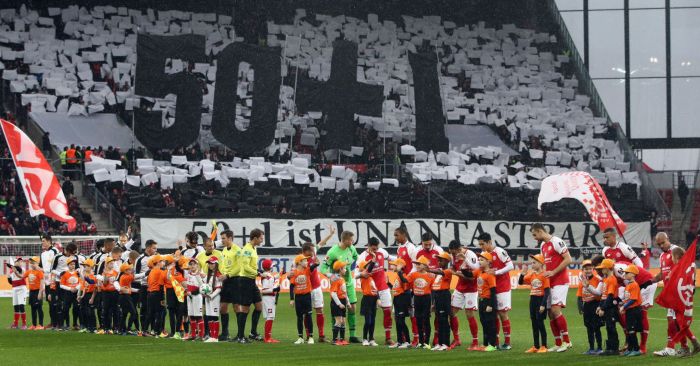 “Let’s take the beautiful game away from the billionaires and hand it to the fans instead.”

It was an innocuous tweet last week from Labour leader Jeremy Corbyn ahead of the general election manifesto which was released today.

Let's take the beautiful game away from the billionaires and hand it to the fans instead.https://t.co/07OHaYasAF

Corbyn was talking of his respect for the German 50+1 fan-ownership model which continues to produce a buoyant Bundesliga with massive revenues and fans having a democratic say in their clubs, all without absentee oligarch control.

The critical responses were overwrought but not knee-jerk, instead the tired reactions of those that have been conditioned over decades by drip drip media to see any solid reform as crackpot – communist, even.

‘It’s official, under a Labour Government football matches will be free to attend & the Billionaire players will be paid £15 per hour, the same as McDonalds workers. #ThatsLabourLogic’ said one, avoiding the £240,000 a week reportedly paid to Phillipe Coutinho by Bayern Munich, who happen to be owned in the majority by its members.

‘To interpret Corbyn. Let’s destroy the UK Premier League’s position in the world and revert to Sunday League’ said another, putting to one side the success of the German top division and their knack of producing World Cup winners.

‘I’m not saying there’s not a problem here, compared to say, the German model – but is there no bandwagon you’re not jumping on, this campaign? What’s ‘free’ next?’

Ah yes, the bandwagon shout, the last defence of the desperate. Except Labour’s desire to get fans in the driving seat was in their 2015 manifesto too when Ed Miliband laid out how Labour would empower supporters’ trusts to appoint two fans onto club boards and take control of 10% of shares.

Holding the Premier League to a 5% contribution to grassroots football was in the 2015 manifesto too, as it is in today’s version. Of course, 2015 was only 5 years into the Tory-initiated austerity programme before working-class people really began to lash out at moderate measures to reverse the swingeing affects of austerity.

Simple, sensible, they deserve the support of people that care about clubs and communities. pic.twitter.com/tyuRfvgfbD

The Germans, with their powerful economy and kick-ass football setup, would laugh at the idea of being born to suffer, to sit down and shut up in football lingo. You wouldn’t see them dead – after learning lessons from the past – doffing their cap to public schoolboys and rallying around the free-market economics that has wrought ruin on our society and as a microcosm, many of our football clubs, asset-stripped by the corrupt.

Plenty will say ‘I’m not voting for Labour just for their football reforms’, some of whom are happy to vote for the Brexit Party on the single issue of leaving the EU. In lieu of that, let’s look at the merits of Labour’s football reforms without linking supporter ownership to Stalingrad and hold politicians of all parties to account on building a better game and, in turn, a better country.