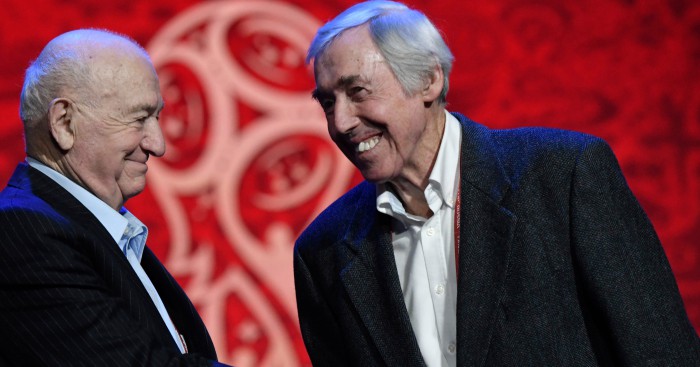 Fake news about Gordon Banks’ death in October left his great grandson in tears at school all day, the goalkeeping great has revealed.

The 79-year-old is in Moscow this week representing England as a former World Cup winner during Friday’s draw for Russia 2018.

That is despite a website reporting that he had died at his home in Sheffield in early October.

Speaking to reporters in the Russian capital on Thursday, Banks said: “I couldn’t believe it – I didn’t see it but somebody just phoned the house asking my family about me.

“It was a disgrace. I just could not believe anybody would think of doing something like that. It’s absolutely ridiculous.

“My great grandson saw it at school. One of the children told him and he couldn’t stop crying. He was crying all day at school.

“What a thing to happen. It was disgusting. Nobody has apologised.”

A six-time FIFA goalkeeper of the year, Banks is still receiving treatment for kidney cancer, which was diagnosed in 2015, but said he is “battling away” and looked in good health during a pre-draw event at the Kremlin on Thursday.

The hoax report, which is still online, was particularly upsetting for Banks as it contained a made-up quote from his wife Ursula and was widely shared on social media at the time.

That forced the 1966 World Cup star to post three tweets that day to assure fans he is “alive and well” and urge the likes of Harry Kane, Gary Lineker and Wayne Rooney to retweet that the story was false.

Unfortunately, the greatly exaggerated nature of the news did not reach last month’s Northwest Football Awards, which included him on a list of players who died this year – a gaffe which drew a hasty apology from presenter Dan Walker during the ceremony in Manchester.

A huge favourite at Leicester and Stoke, Banks was capped 73 times by England and represented his country at the 1966 and 1970 World Cups.