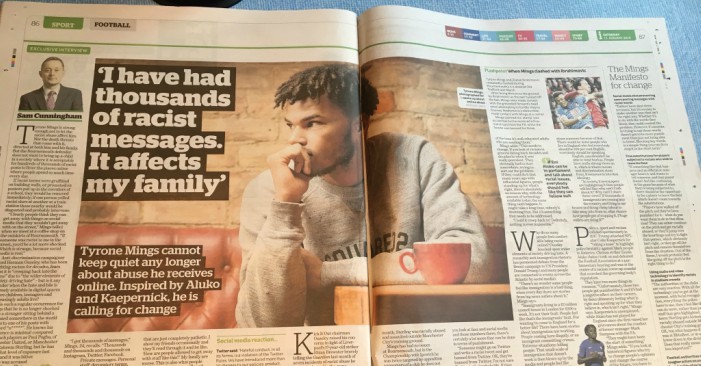 Banter is one of the most frequently used words in football’s lexicon. Banter between players, fans, pundits and presenters, banter on social media.

The word is used for a wide range of behaviour from taking the mickey out of someone’s brightly coloured tie, skitting someone’s haircut, telling a player they were slow, or calling them a ‘feminazi c***s***g bitch’, or a ‘lazy f***king n*****’ on Twitter.

Banter was the Richard Keys and Andy Gray defence. Outside of football last week it was the John Humphrey’s defence. It was the Mark Sampson defence too, and hey, a coach talking to someone of African descent in a fake Caribbean accent, that’s gotta just be banter, right?

I dare say it’ll be the Peter Beardsley defence, and possibly the Graeme Rix and Gwyn Williams defence too. That Sol Campbell song, the Arsene Wenger song, Hillsborough songs, songs about murderers, the Munich song, the hissing noises, 10 German bombers, no surrender…I’d rather be a… Banter. Banter. Banter. Whoo hoo! Bantz have gone wild.

Top FA man Martin Glenn, ever the hapless bull in the PC china shop, looking around himself dazed and slack-jawed, out of touch, but sadly not out of work, also used it this week. This from the Guardian.

“I think culturally what women will be prepared to put up with has been a bit different from guys.” Asked to explain what he meant, Glenn added: “I guess banter would be a case in point. Now our grievance and whistle-blowing procedures are common across men’s and women’s teams. Our coaching guidelines are common across men’s and women’s teams. But I think it’s fair to say from what we’ve seen is there are probably some differences in what they would expect to hear or say.”

Because black male footballers of African descent don’t mind being spoken to in a Jamaican accent by a Welshman, do they? They love ebola jokes about their family too. Ha ha. It’s just banter, mate, and it even lives in the default assumptions at the top of the FA. He speaks about women as though he doesn’t know any. He talks as though women are not individual people but a collective who all think the same, and as though men are likewise. We’re like this. You’re like that. And why does anyone have to ‘put up’ with anything in their workplace? Is it because the bantersaurus must have primacy? Glenn would seem to think so

Yes it’s all about the banter. Ha ha. Banter. It’s just laugh, innit? Where’s your sense of humour, you libtard? You can’t say anything these days with all these SJWs and snowflakes. It’s political correctness gone mad. I never meant no harm.

Ah yes, the banter defence. The last refuge to excuse abusive behaviour, deployed to try and diffuse, obfuscate and if the subject doesn’t like it, paint them as the guilty party, not the abuser. It’s the player’s fault for reacting badly to being called “a lazy f****** n***** “. You better toughen up you f****** c***!

Tyrone Mings spoke powerfully last week of the streams of vile racist abuse and death threats he’s had on social media and what can be done to stop it. And he’s far from alone. Almost every footballer’s timeline is full of nasty, vicious abuse of one form or another.

And it is the banter culture that is the seed bed into which these poisonous weeds are planted, then watered and fed by the one-eyed monster that is tribalism. Mings was targeted by Manchester United fans because of an elbow to Zlatan Ibrahimovic. Blind tribalism meant he must pay for this crime, it would seem.

And every club has its tribal nutters. I always remember my pal, who worked for the Daily Record, telling me of the times he’d take calls from Old Firm fans complaining that they’d written 743 words about the other Old Firm team and only 692 about theirs, thus proving how biased the paper was. And they were serious. It seems likely that those are the sort of people taking to Twitter to abuse footballers.

So how do we stop this river of poison that footballers have to swim in 24/7? Easy. We have to culturally outlaw the banter mindset.

Okay, not so easy.

The first thing to say is no-one wants to make being witty and funny at the football or on Twitter or anywhere else frowned upon. Indeed, when done well, it is all part of the entertainment. My pal, Alan Tyers recalls being at Hibs when a fan shouted “Congratulations, Renwick, you have reached the dizzying heights o’ pish!” Which is some sort of poetry when delivered in a Leith accent.

Banter isn’t this. But what is it exactly? Well at its dark heart, it’s abusive behaviour, isn’t it?

It is fed by things such as humiliating practical jokes and nasty personal insults. Now, some people find these things very funny and have no issue with finding a dog poo in their shoe, or being told your mother is a whore. But woe betide you if you don’t. We all experienced this at school. Some kids laughed it all off while others – the majority I would suggest, hated it and though they may have tried to put a brave face on, absolutely loathed the humiliation and upset it caused. I vividly remember one lad bursting into tears because banter merchants stole his clothes after games and threw them on the gym roof. He hated being the centre of attention and was crippled with embarrassment – which is why the bullies did it, of course. They knew it would hurt him. And I never
forgot how they laughed later in the day. It wasn’t called banter back then, but yeah, that’s banter.

Banter is part of football’s culture of arrested development. Clearly, the perpetrators of the sort of abuse Mings suffered, hasn’t grown from nowhere. They feel entitled to do it, free to do it, justified in doing it, even.

But there is hope.

Our collective experience of outlawing racism in grounds tells us such seemingly high hurdles are not impossible to overcome.

Online life is not removed or separate from ‘real life’. One informs the other. So if banter becomes something that it isn’t tolerated offline, online should eventually follow, though the supposed anonymity it offers slows progress down.

Perhaps that only fills some with more anger and causes them to take to Twitter with even greater ferocity. Maybe the tidal wave of abuse footballers now routinely suffer from is actually part of the extended dying pains of Banter, as it paints itself further into its miserable, isolated and unsustainable corner, laughing a little too loudly as it does so, until it finally disappears up its own backside.