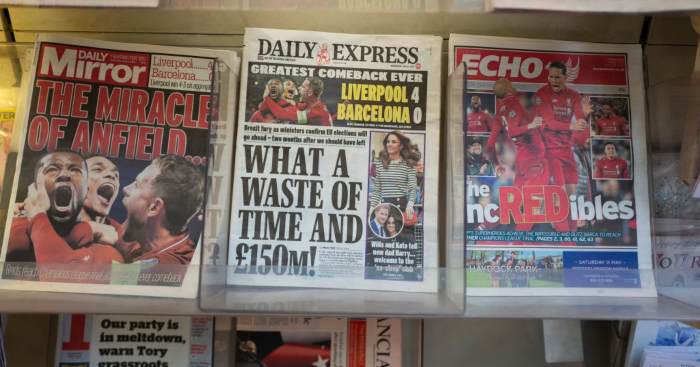 Barcelona are still suffering from last season’s Champions League defeat to Liverpool, according to reports.

Ernesto Valverde’s LaLiga champions arrived on Merseyside boasting a 3-0 advantage following their semi-final first leg, but their dreams of reaching a the Champions League final were dramatically crushed.

The Catalans suffered a similar capitulation against Roma the season before and La Vanguardia claimed in September that Barcelona were still ‘in a state of shock’ from defeat to Jurgen Klopp’s men.

The report said ‘Barca remains paralysed four months after Liverpool’ with the 4-0 loss in the second leg seen as the ‘cruelest’ in Barcelona’s history.

‘Every day is Liverpool’ and the players are ‘unable to move forward’ and are still ‘trapped in Anfield’.

On Monday, Mundo Deportivo (via Sport Witness) says their 3-1 defeat to Levante at the weekend is a prime example of how they have a ‘mental issue’ from their defeat against Liverpool that has managed to infect all of their new players too.

AS, meanwhile, use some very strong language to describe Barca’s struggles on the road, calling it ‘Anfield syndrome’ and explains how the team are ‘paralysed’ away from home.

Their ‘wound continues to bleed’ with Valverde’s team still suffering from ‘post-traumatic stress’.